The Miami Dolphins don't play until 4:05pm ET today, so we have a full early afternoon slate of football games to watch today. What game are you watching? Join our live thread to discuss the action and wait for the Dolphins to take the field. If you want to join in the discussion, including during our live thread for the Dolphins game, make sure you sign up for your free SB Nation account.

It's Sunday, which means it's football time. However, it's still not Miami Dolphins football time, as they don't face the Atlanta Falcons until 4:05pm ET. So, what's on during the 1pm ET time slot? We have the schedule. You can also join in the discussion throughout the games by discussing the game action in the comments below:

The majority of the country, to include all of Florida, will be watching the Houston Texans at Baltimore Ravens game, with Greg Gumbel and Dan Dierdorf providing the commentary. Most of California and all of Tennessee will see the San Diego Chargers at Tennessee Titans game, while the northern states from Montana through Ohio and south to Nebraska, Iowa, and Illinois will mostly see the Cleveland Browns at Minnesota Vikings. The Oklahoma City market will also be getting the Browns/Vikings game, and the Dallas, Cincinnati, Boston, Charlotte, and New Orleans markets will not be receiving a CBS game in the early time slot due to NFL rules.

All TV coverage data from 506 Sports

The Fox early slot is a little more complex, with the Green Bay Packers at Cincinnati Bengals taking the number one position, and most of the northern and western portion of the county. Here's a look at the entire coverage map, via 506sports.com: 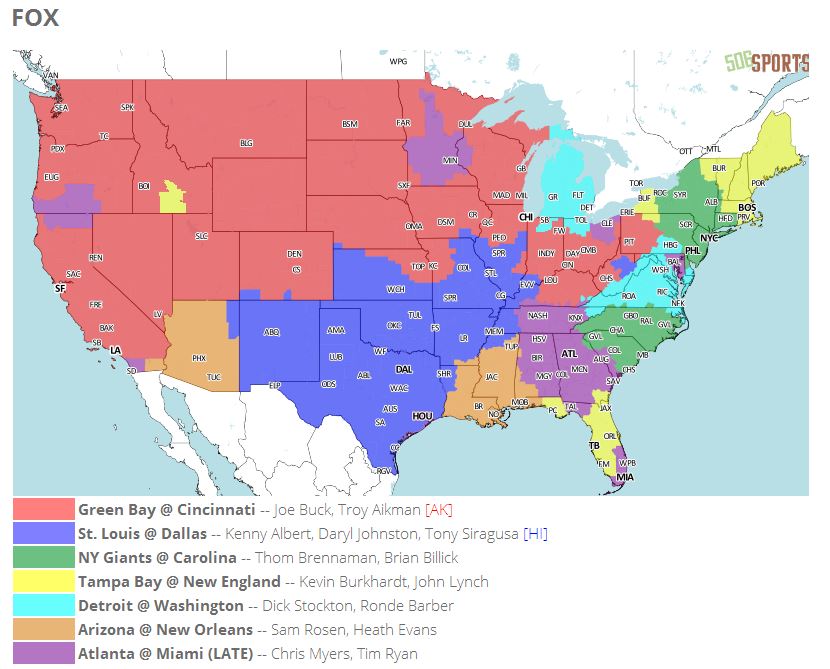 The Falcons at Dolphins game, as indicated above in purple, will be seen in South Florida and most of Georgia. But, that means there will be no early Fox game in those markets, since this is a CBS double header weekend.

As usual, keep pictures to a minimum, and appropriate, in a live thread. I will remove pictures that are inappropriate and they can lead to warnings and/or bannings.

Do not request or post links to illegal internet streams of the game (instant temporary ban if you do).