Miami Dolphins vs. Indianapolis Colts: Anatomy Of A Touchdown

A weekly in-depth look at a key play in a Miami Dolphins game. This week: the Mike Wallace touchdown AND the big play to Charles Clay.

Share All sharing options for: Miami Dolphins vs. Indianapolis Colts: Anatomy Of A Touchdown

Last week, we looked at the touchdown to Brian Hartline in the 23-10 victory over the Cleveland Browns. That was about the only highlight play from that game on the offense. This week, there were a number of big plays as quarterback Ryan Tannehill won the dual with his counterpart, Andrew Luck. The plays we will look at this week both came from the first quarter.

After a missed field goal by Adam Vinatieri, the Dolphins started at their own 42 yard line. They drove down the field in 6 plays to score a touchdown. After Indy got a field goal to make the score 7-3, the Dolphins only took 3 plays to score another touchdown. It was an explosion of offense that fans haven't seen in a long time. The two plays for this post were important plays that gave Miami that early 14-3 lead. Let's look at the Mike Wallace touchdown on the first drive. 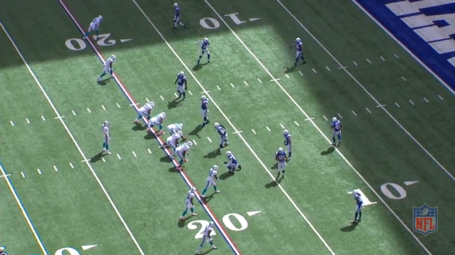 As Tannehill gets the ball, you can see the play develop. Wallace has stepped back ready to catch the screen pass. He first makes a jab-step fake to get the CB (Toler) to think he's running a regular route. You can see Jonathan Martin disengage from his defender, and Incognito is about to do the same. They are carrying out the run fake to the left to freeze the linebackers. Pouncey, Jerry, and Clabo are about to release to the right to block. 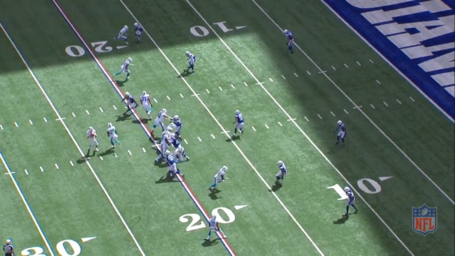 Here is the end zone angle. 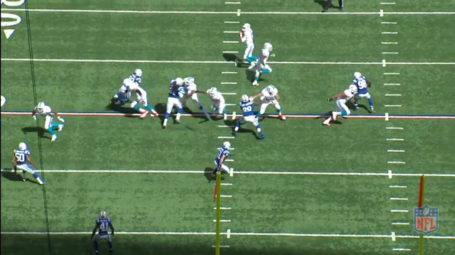 You can see Angerer (51) is covering Miller and has his back turned to the action. Clay appears ready to block Freeman (50), but as you'll see on the next shot, he is going to block Toler. Clabo, who is releasing downfield, will block Freeman. You can also see Pouncey releasing as well.

As Wallace catches the ball, you can see the blocking assignments taking shape. 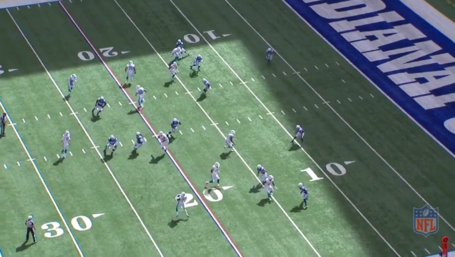 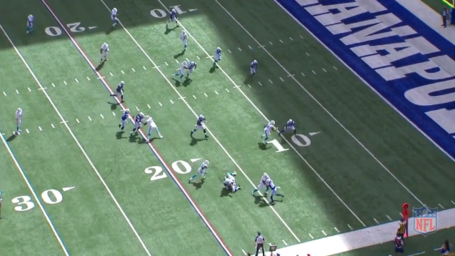 In this shot, you see Wallace has caught the ball and is heading up field. The closest defender is a defensive lineman (right above the #20) and he has no chance to catch Wallace. Just to the right of Wallace, you can see Clay taking out Toler and Clabo has taken out Freeman. Only player in Wallace's way is the safety. That's why Pouncey's block was so critical. If he whiffs on the block, the safety can tackle Wallace short. Pouncey does not fail though and takes out the safety. Only Laron Landry (top right) has a chance to make a play. 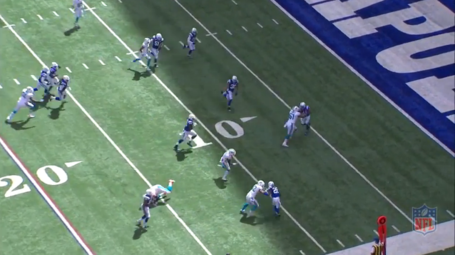 Here's a better view of Pouncey's block. The center makes a key block 10 yards downfield. Amazing! Landry shows great closing speed on this play, but Wallace is still too fast.

Here is the moment of impact. 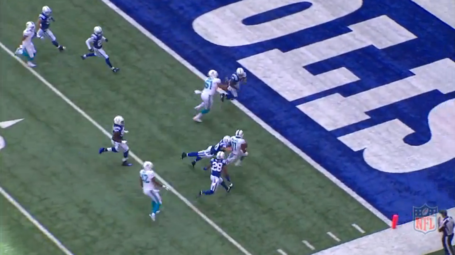 Wallace's speed plus the angle at which Landry hits him gives Wallace the momentum to fall into the end zone. 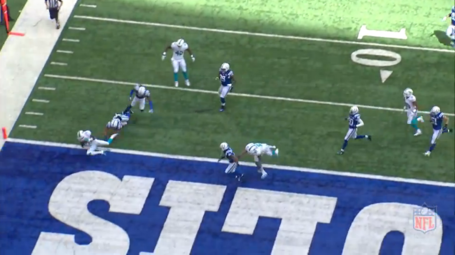 Here's the end result: Wallace falling into the end zone for his first touchdown as a Dolphin. A great play call, even better blocking, and Wallace's elite speed made this play almost indefensible for the Colts. Of course Wallace went on to have a career best 9 catches for 115 yards and the highlighted touchdown.

When Dustin Keller went down with an injury, the tight end position went from being a perceived strength to a glaring weakness. Lowlighted by the following preseason game where Charles Clay, the next man up, looked really bad. Fans were wondering who, if anyone, would step up to fill the void. In the first game, Clay had a respectable 5 catches for 54 yards. But it was worth noting that Clay was a target the Tannehill looked for in that game. In this game, Clay not only became a target, but a weapon. On the Dolphins second drive, they had a 2nd and 7 at their own 23 yard line. Here's what happened.

The Dolphins are lined up in a single-back, 3 receiver set, with Wallace lined up wide right, Hartline lined up wide left, Gibson in the slot right, and Clay is lined up as a tight end, in-line on the right. Tannehill is in the shotgun, with Miller lined up to his left. The Colts appear to be in their nickel package with 4 defensive linemen, 2 linebackers, and a nickel CB. 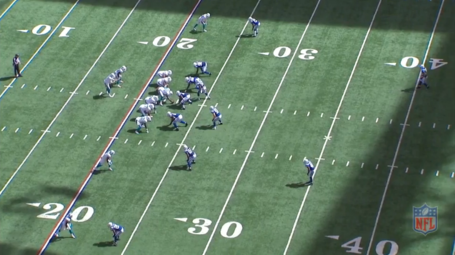 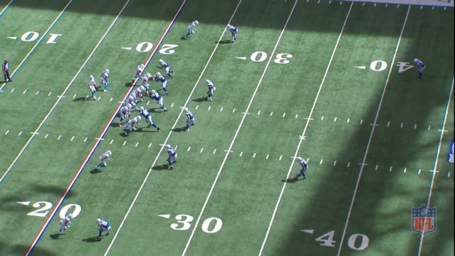 At the snap, you can see Indy in Cover-2 Man with the linebackers covering Clay and Miller.

In the next frame, you can see the play fully developing. Gibson and Wallace run square-in routes, Hartline runs a deep route on the outside, and Clay attacks the seam (this is a play I call often in Madden). The following shot is the moment Tannehill releases the ball. 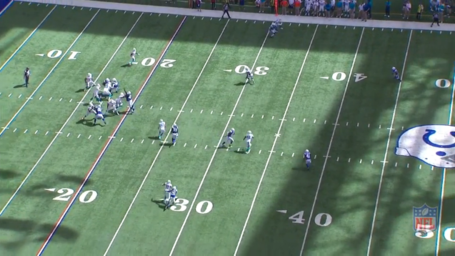 Tannehill could have taken the safer throw to Gibson here and would have gotten close to the first down marker. But he takes a chance with a throw to Clay. 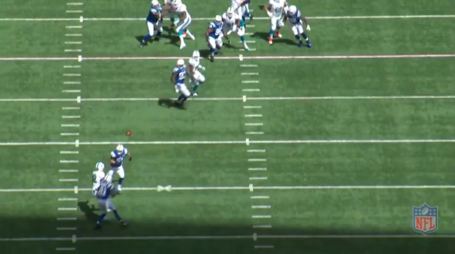 Here is the pass just before it reaches Clay. The safety has reacted to the play and moves in to attempt an interception. The linebacker has his head turned and doesn't play the ball. 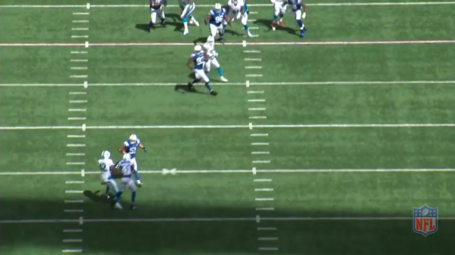 This shot shows the ball just as it arrives to Clay. This play was tough to diagnose on the computer because it's tough to pause it frame by frame. This is the best shot of the play just before the catch that I can get. To fully analyze this play, I went back to the DVR and watched it frame by frame. The pass sails just over the left shoulder of the defending linebacker. Only Ryan Tannehill knows if the pass was thrown behind Clay by design or by mistake. Clay was actually turning back toward the middle of the field, so it's tough to tell. Regardless of what the intent was, the play worked. The safety, as you can see above, is moving in for a INT attempt. But the ball is to Clay's outside shoulder, almost like a back-shoulder throw. If the ball is thrown to Clay's inside shoulder, it will be deflected or picked. Since it was thrown to the outside shoulder, the safety is actually out of position, as you'll see in the next shot. 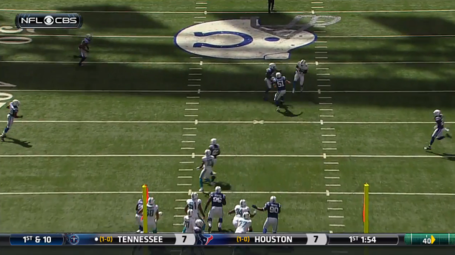 This is the moment that Clay secures the pass. Bethea has overrun the play by a yard or so. Angerer is running toward Bethea and his momentum is now carrying him away from Clay. 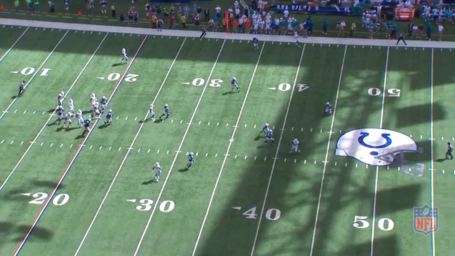 This is the moment when Clay turns upfield. You can see Angerer is just now reacting and Bethea is already out of the play. By the time Angerer can change direction, Clay has already turned and has about 4 yards of separation between him and Angerer, as you'll see in the next frame. 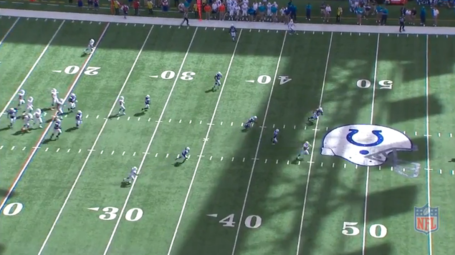 It's a foot race at this point and Clay only has to beat the angle that Laron Landry (just left of the helmet). Landry does catch him about the 12 yard line and tackles him out of bounds at the 10. 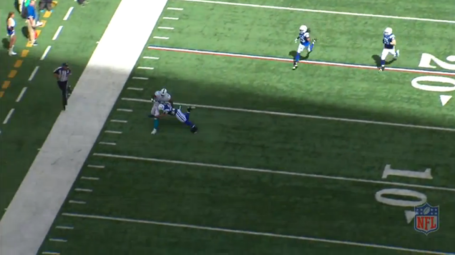 67 yards later, Miami is set up for another score. This was a huge play for the Dolphins from a player that most fans wouldn't have expected big plays from. Miami was deep in their own territory and BOOM, they are in the red zone after one play. Of course, you know what happened on the very next play... 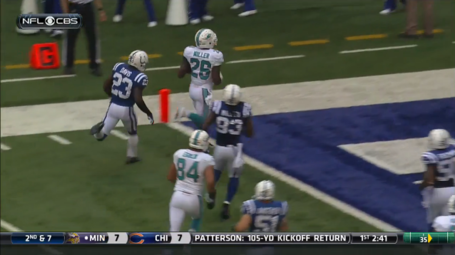 I want to point out a couple of things here about the protection. First of all, Tannehill got the ball out in about 2 seconds. Quick throws like that will help the O-line simply because they won't have to block as long. But the second thing, was that Tannehill HAD to throw it quick because Martin was beaten by a spin move. 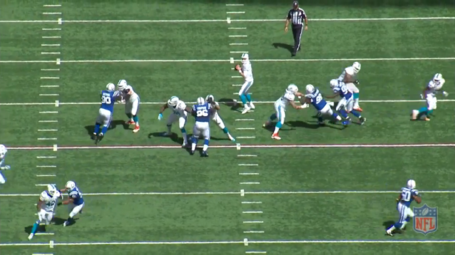 As you can see in the frame above, the defender has pulled off the spin move and Martin did not recover. Had Tannehill waited about a half-second longer, this would have been a sack. I saw Martin get beat at least one other time with a spin move. This will be something he needs to work on as the season progresses. Give Tannehill credit for his quick decision. Also, Incognito pushed his defender up into the path of the rusher, which slowed him down a little. Other than that however, the protection on this play was good.

The game, as expected, ended up being close, with the Dolphins earning the victory in the end. But it was a welcome sight to see explosive plays on consecutive drives from a offense that hasn't had much of that. The Dolphins should be able to build on this and continue making more big plays. They will need them if they want to contend this season.