After the Dolphins defense played hero on Sunday by sealing a 24-20 win over the Indianapolis Colts, it only seems appropriate to recognize a defender with this week's game ball. The choice is defensive tackle Randy Starks, whose six second-half quarterback pressures were key in Miami's neutralization of the vaunted Colts passing attack late in the game.

With Miami leading by four and its offense struggling, the stage appeared set for another Andrew Luck fourth quarter comeback. The second-year quarterback has already developed a reputation for late game wizardry early in his career, and the Dolphins were in the ever-growing group of teams that saw it first hand, having fallen victim to Luck's heroics when the two teams met last season.

But things went differently this time. Luck had two opportunities to lead his team to the winning score, but threw an interception in the endzone midway through the fourth quarter and took a sack on a fourth down that sealed the victory for Miami.

The difference was an improved defensive performance from a year ago. In a way, the outcome was a direct return on some of the moves the Dolphins made this past offseason: it was free agent pick up Brent Grimes with the pick in the endzone, and fellow signee Philip Wheeler was credited with the game-clinching sack.

But no defender had a more consistent or dominating second half than defensive tackle Randy Starks. He played a leading role in Miami's overall pass rush effort that forced Luck into a number of mistakes down the stretch. Starks alone accounted for six of the defense's 15 total quarterback hurries on the day, with five of them coming during Indianapolis' two fourth quarter drives.

He didn't record an official sack in the box score, but Starks had a considerable impact on this game, and had his hand on both of the defense's drive-ending plays.

On Grimes' interception, it was Starks' pressure that forced Luck off of his spot and to reset his feet, from where he launched an ill-fated deep pass to a well-covered Reggie Wayne. Starks beat a double team to do it, too. 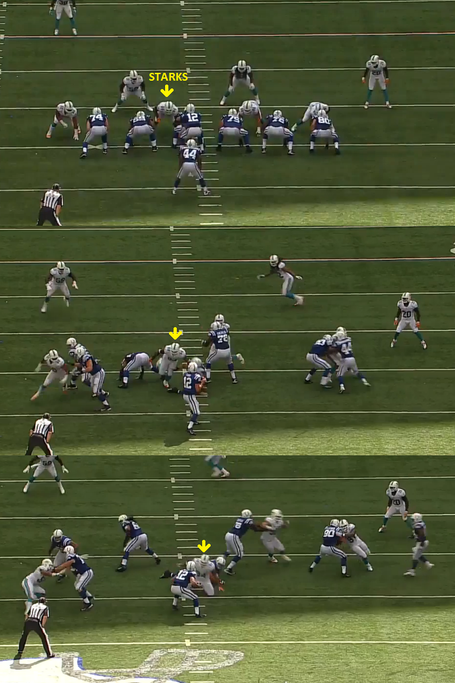 Starks was also one of a few Dolphins who converged on Luck for the sack on a fourth down play with less than two minutes left in the game, the final chance the Colts had to win the game.

The game ball could have gone to a number of Dolphins defenders, including Grimes or Wheeler, or to one of Miami's many productive offensive players, such as Ryan Tannehill or Mike Wallace.

But the tide of the game turned in Miami's favor when the defense began getting repeated pressure on the quarterback, and Randy Starks led the charge. He gets this week's game ball.