Miami Dolphins vs. Cleveland Browns: Anatomy of a Touchdown

A weekly in-depth look at a key play in a Miami Dolphins game. This week: the touchdown to Brian Hartline.

Share All sharing options for: Miami Dolphins vs. Cleveland Browns: Anatomy of a Touchdown

The Miami Dolphins got into the win column with a road victory over the Cleveland Browns. The defense was outstanding, racking up 6 sacks and 3 interceptions. Cameron Wake and crew were dominant as they constantly pressured Browns quarterback Brandon Weeden and stymied running back Trent Richardson. There was a number of plays that could be highlighted from the defensive side of the ball. The offense didn't have as many. The running game was ineffective, and quarterback Ryan Tannehill had to put the offense on his back and carry them to victory. He had a stellar fourth quarter drive in which he led the team down the field for a game icing touchdown. However, the biggest play of them all was his touchdown pass to Brian Hartline. Let's look at the play.

The offense was set up at the Cleveland 34 yard line on 2nd and 6, after a 4 yard run by Thomas. The Dolphins come out in a single back set, with 3 wide receivers, and Charles Clay lined up in-line as a tight end to the right. Hartline is lined up wide to the left, Wallace wide to the right, and Gibson in the slot to the left. 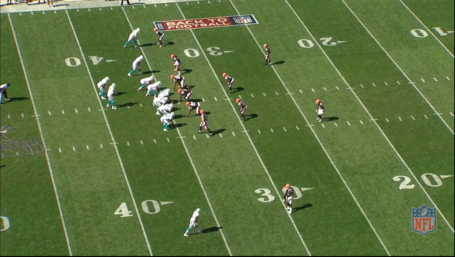 From this shot, it appears Cleveland is in their base 3-4 set. Linebacker Jabaal Sheard is lined up in coverage over Gibson (previous frame).

At the snap, you can see the safety to the right has shifted down from inside the hashes closer to the numbers to help out with Wallace. The other safety stays in his area (following frame). 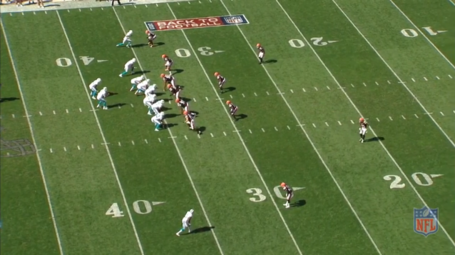 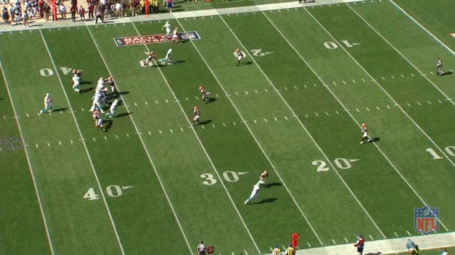 This is Tannehill at the top of his drop. He ran a read-option play fake to Thomas who is now releasing into the middle for the check-down. From this look, it appears that the Browns are in a Cover 2 Man defense, with a four man rush and the weakside OLB in man coverage on the slot WR.

The safety on Wallace's side is retreating back to double Wallace should he get free. The inside linebackers have the inside covered. Sheard is beaten by Gibson, but the safety is there for the coverage. Hartline is single covered at the top.

Tannehill has 4 passing options on this play: throw to Wallace who is being covered with safety help over the top, throw to Gibson who is open, but with a safety and linebacker in the area, dump it off to Thomas for a minimal gain, or rely on Hartline to get open on the single coverage. If you look closely, you can see Hartline setting up CB Buster Skrine with the double move. Tannehill makes the right decision. 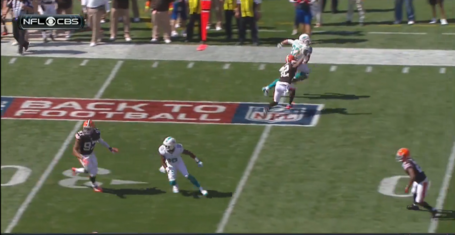 From this shot, you can see two things: one, that Gibson has beaten Sheard and the safety has to honor that. And two, that Hartline has executed his double move and the cornerback Buster Skrine bit on the fake and is now beaten. Here's the play a few steps later: 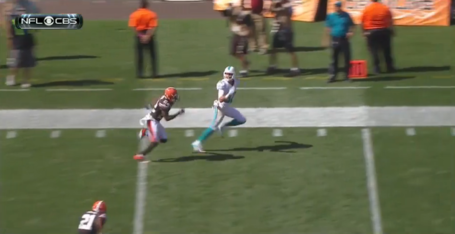 You can see the CB is clearly beaten and the safety is too far behind the play to be a factor.

This play also required a good throw in order to be effective. I saw on twitter that some people were saying this was the best throw of Tannehill's career. He throws a laser from the 42 yard line and hits Hartline in stride at the 3. It was indeed a fantastic pass. 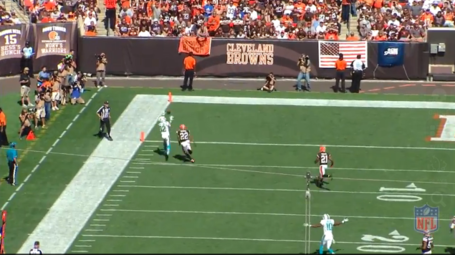 Here it is from a another angle: 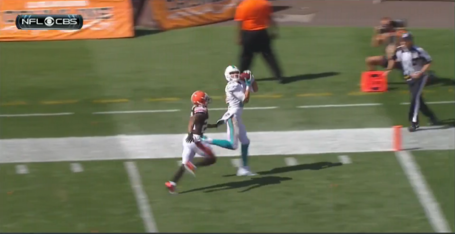 Hartline strides into the end zone and the Dolphins take the lead for good in this game.

You have seen those pieces of the puzzle; the offense, defense, routes and throws. But the puzzle would be incomplete without looking at Tannehill's protection. 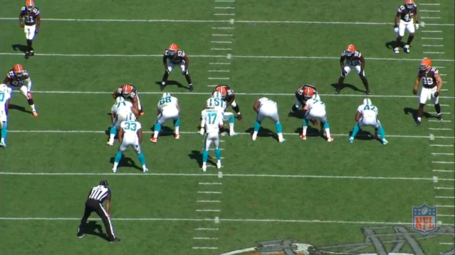 This is the pre-snap alignment. The Browns, as mentioned, are in a standard 3-man front, with Kruger (99) and Sheard (97) lined up wide as rushers. Sheard eventually drops into coverage leaving the 3 defensive linemen and Kruger as pass rushers. 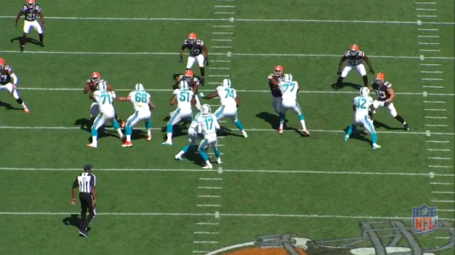 Just after the snap, you can see the O-line shift to the left with their blocking, in part to sell the run fake Tannehill is executing now. Clabo and Martin have the DEs with Incognito and Jerry for help if needed. Charles Clay is given the task of blocking Kruger alone (uh-oh?) 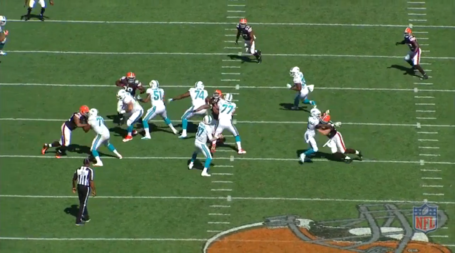 You can see from this frame that the O-line has done their job. Tannehill is in his throwing motion and there is a clean pocket. Kruger had moved a step inside due to the play fake and that held him up enough. Clay does a good job blocking him and Kruger ends up on the ground.

So there you have it. The Dolphins used this play to gain the lead and eventually the win. They will need many more plays like this in order to secure victories against some tough opponents.