Statistically, other players made more of an impact during Sunday's game. Ryan Tannehill threw for 272 yards. Cameron Wake tallied 2.5 sacks. Brian Hartline was spectacular, catching nine passes for 114 yards and a score. But one player in particular was at his best when his team needed it the most, as the game hung in the balance. That player was wide receiver Brandon Gibson.

The numbers were modest for Gibson -- seven catches for 77 yards, with two drops and no touchdowns in 10 targets. One must look beyond the black-and-white statistics to see the imprint he made on this game.

The Dolphins went into halftime of Sunday's matchup with the Browns down 7-6, as the offense spent the first 30 minutes of the game desperately searching for some measure of continuity. Tannehill seemed to find a rhythm for brief stretches, only to have his running game put him in long-yardage situations or to take a third down sack, killing a drive.

In the second half, however, the Miami offense found its groove, thanks to Tannehill finally finding some of the aforementioned continuity. Hartline filled up most of his stat line during this stretch, but when the Dolphins needed a first down conversion, it was Gibson who emerged as Tannehill's most dependable target.

During two second half touchdown drives, Miami converted three third downs. Each play went to Gibson, who accounted for 56 total passing yards in the two possessions. He also drew a pass interference penalty in the endzone, setting up a Daniel Thomas one-yard touchdown run.

The connection began developing midway through the third quarter. The Browns had success blitzing Tannehill on third downs, and both of Miami's first two possessions of the half ended in punts after quarterback pressure forced an incompletion on third down.

Faced with a 3rd-and-9, Cleveland again dialed up a heavy rush, this time sending seven total blitzers. Gibson ran a short post pattern in front of the safeties. 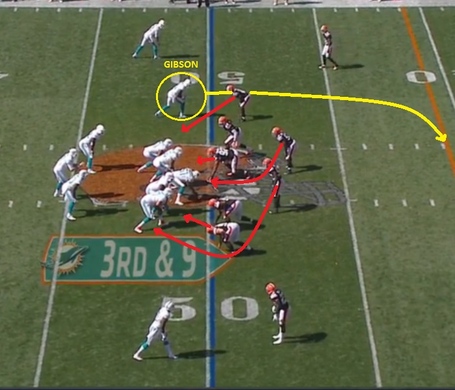 This time, instead of succumbing to the pressure, Tannehill finds an open Gibson, who absorbs a bruising hit from the safety to secure the first down. 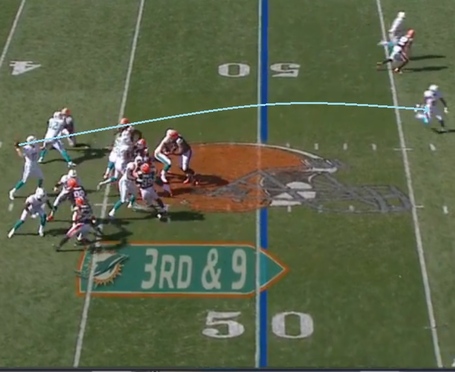 In the absence of injured tight end Dustin Keller, it was Gibson who provided a reliable outlet in the middle of the field for Tannehill. He was targeted six times on third down during the game, converting five and gaining 48 yards in the process. The one miss was a dropped pass on the Dolphins very first possession of the game.

All in all, a nice contribution from Miami's No. 3 receiver.