In the violent world of the NFL, there is sometimes a blurry line between what is legal and what is not.  Then there are plays where you repeatedly kick a player in the head or your swing that player's helmet at his own head.  Those plays are pretty well across the line.  In the span of a year, Houston Texans defensive end Antonio Smith did both of those things to Miami Dolphins guard Richie Incognito, kicking at Incognito last year during the teams' Week 1 matchup and swinging the helmet he had just ripped off Incognito's head back at the Dolphins' Pro Bowl guard this preseason.

Smith was fined for the kicking incident and suspended two preseason and one regular season game for the helmet.  But, when he spoke about the incidents for the first time this week, Smith wanted everyone to know, he's forgiven Incogntio for the incidents.

Yes, Smith has forgiven Incognito for being at the receiving end of the kicks to the head and for allowing Smith to rip off his helmet and swing at his bare head.

"After all my hurt and pain - my ranting and raving - I felt like they should have done something to him," Smith told reporters during an appearance and the Houston Sports Collectible Show. "Why me? At the end of the day, I'm in the meeting room and my brothers are looking at me, like, ‘I can't believe you're going to be gone. We're going to miss you.'"

Why Smith?  Because you kicked a player in the head repeatedly and swung a helmet at his head a year later.  That's why you.

"Days after that situation, I just let it go," Smith continued in his deep understanding of how the victim in two incidents needs his forgiveness. "I forgave him. I forgave myself." 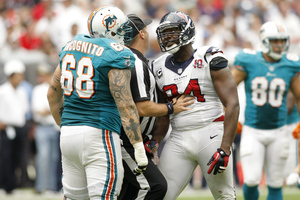 In a 2012 game, Houston Texans defensive end Antonio Smith repeatedly kicked Miami Dolphins guard Richie Incognito in the head, then claimed Incognito was trying to break his ankles. Incognito explained that he was holding on the play, but was not trying to injure Smith.

Smith was initially fined $21,000 for the kicking incident, but appeals dropped it to $10,000.  This year, he appealed the helmet swinging incident, but it was denied.  Missing the Texans' opening game will cost Smith a game check of $352,941.

Smith says that the suspension, and Incognito's role in dodging the helmet swung at his head, will give him a drive that he hasn't had in years when he returns to the field starting in Week 2.

Hopefully, the offensive linemen he faces the rest of the season will be as agile as Incognito when they get in the way of his kicks or helmet swings.