Tomorrow, the Miami Dolphins face the Jacksonville Jaguars in Preseason Week 1 action. With the Hall of Fame Game in the rear view mirror, the Dolphins’ 53 man roster could be starting to take shape already.

I don't know how to do it. How do you take the 90 man roster the Dolphins are currently using, and turn it into a 53 man regular season roster? I don't think there is a way to keep all of the potential talent the team has. Someone who should make the roster is going to get cut. In fact, there are probably multiple people that will end up on someone's 53 man roster who will have to leave Miami, simply because the numbers do not work.

That being said, here is my current projection of the Dolphins' 53-man roster, broken down into the depth chart. It's wrong. I'm telling you that right now. But, at this point in the preseason, it's about as good a breakout as can be done. 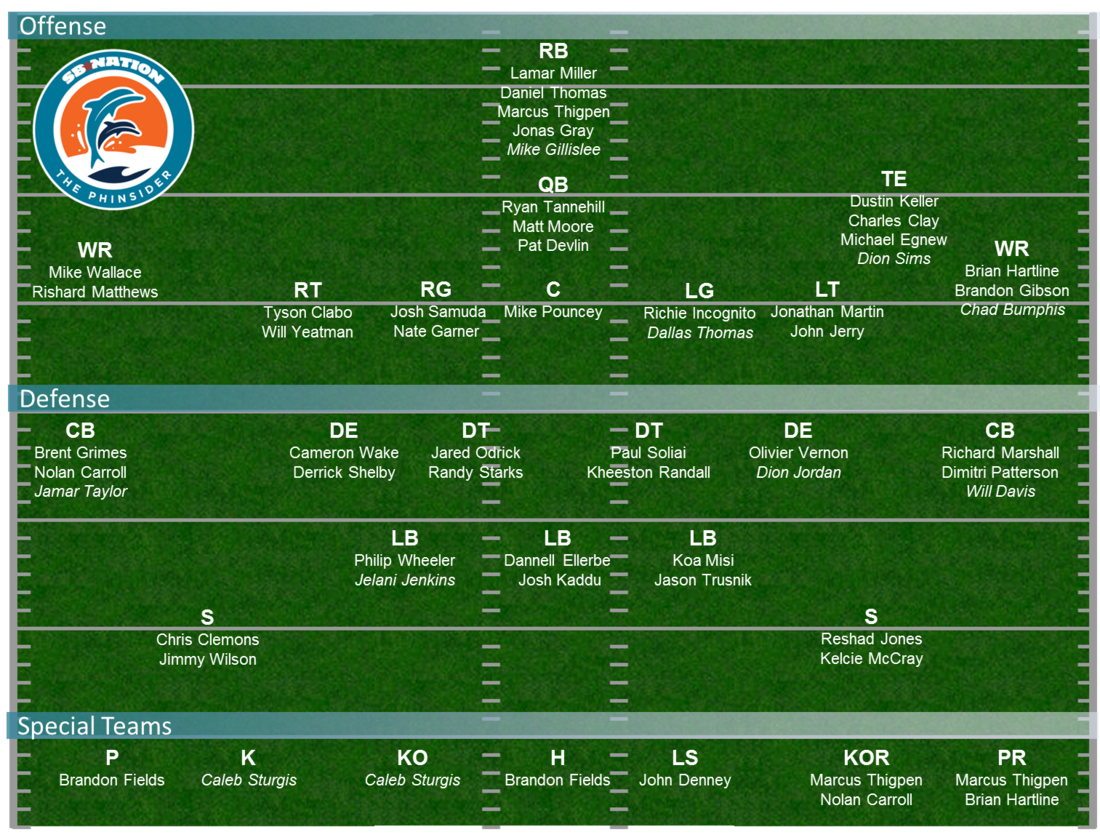 - Quarterbacks: Nothing special here. Ryan Tannehill will start, Matt Moore will back him up, and Pat Devlin will be the third string guy.

- Running Backs: Yes, I am keeping five running backs. Lamar Miller will start, and Daniel Thomas will be the primary backup, but there is so much potential in the guys behind the two of them, there's no way to cut anyone. Jonas Gray is coming on strong right now, after spending a year on injured reserve, but it probably the running back closest to being on the wrong side of the cut line. Mike Gillislee stays on the roster at this point thanks to his draft status.

- Wide Receivers: The top three positions are locked in, with Mike Wallace, Brian Hartline, and Brandon Gibson. After that, Rishard Matthews, assuming he is healthy, will likely take the fourth spot. For now, I am giving Chad Bumphis, the rookie making a splash in training camp and the Hall of Fame Game, the nod. Of course, we went through this last year with Chris "7-11" Hogan, so it's very possible Bumphis falls back down below the cut line, giving a space for Marvin McNutt or Jeff Fuller. Finally, I do only have five receivers making the roster, but that's because I am counting Marcus Thigpen as the sixth (also why I did not mention him in the running backs paragraph above). Thigpen may be listed as a running back, and may wear a running back's number, but I think he is going to see the majority of his offensive snaps this year split out as a receiver.

- Tight Ends/Fullbacks: This is one of the hardest areas to figure out what the team will do. And, really, that decision means the difference between Jorvorskie Lane being on the roster, or looking for a job. In the end, I think the Dolphins would rather keep Dustin Keller, Charles Clay, Michael Egnew, and rookie Dion Sims, leading to a four tight end, zero fullbacks roster. But, I would not be surprised at all if that changes week to week throughout the preseason.

- Offensive Linemen: I have nine making the roster, but I really wanted to make it just eight. This goes back to the numbers game. Everywhere I can take a risk by cutting one more player, I can keep someone else. In this case, it's John Jerry in the crosshairs. Clearly Tyson Clabo, Mike Pouncey, Richie Incognito, and Jonathan Martin will make the roster as starters. I think before camp is over, Josh Samuda will join that group as the fifth starter. Will Yeatman has been a development project, converting him from tight end, and I don't think the coaches are ready to give up on that yet. Nate Garner is the do everything lineman, so he will continue to be a member of the team, while Dallas Thomas will likely settle in as a guard at some point in camp. Which brings us back to Jerry. I don't see the Dolphins carrying both Jerry and Lance Louis, but I do think one of them can make the squad. Louis' injury, as well as Jerry's experience having been a left tackle previously, gives the edge to last year's starting right guard.

- Defensive Linemen: The Miami front seven, the defensive line and the linebackers, are incredibly deep, leading to the team having to cut talented players. Cameron Wake, Paul Soliai, Randy Starks, Jared Odrick, Olivier Vernon, and Dion Jordan are all guaranteed to make the roster, giving us six linemen already. I would like to take that to nine, but just don't have the roster positions for it. Instead, Kheeston Randall, who I think the team would like to groom to replace Randy Starks or Paul Soliai next year, and Derrick Shelby, who has shown great promise as a reserve pass rusher, make the 53-man roster, while Vaughn Martin just misses making the cut. If the team can find a way to keep a ninth, it will take no thought to decide it's Martin making that cut.

- Linebackers: Like the four positions in front of them, the other part of the front seven could see talent walking out the door. Philip Wheeler, Dannell Ellerbe, and Koa Misi are the starters. Behind them, I have Jelani Jenkins claiming a spot based on his draft status, while Josh Kaddu and Jason Trusnik also make the roster. Though, I am about 50/50 on Trusnik right now. I could see him released and Austin Spitler make the roster instead. It will likely come down to special teams play between those two. I would like to find a way to keep Lee Robinson on the roster, but just don't have the position right now.

- Cornerbacks: The cornerbacks are actually fairly easy to figure out, thanks to the play of Dimitri Patterson. The top spot immediately goes to Brent Grimes, with Patterson and Richard Marshall working the second and third positions. Nolan Carroll, thanks to his special teams work, claims the fourth position, while rookies Jamar Taylor and Will Davis take spots five and six. If Taylor cannot get healthy, the team could look to place him on injured reserve, which would likely bring DeAndre Presley back to the roster.

- Safety: The safeties are also easy to slot right now. The starters are the newly extended Reshad Jones and Chris Clemons. Behind them, Jimmy Wilson and Kelcie McCray serve as the reserves. McCray has had a few days as of late, which could open the door to someone like Jordan Kovacs (who I have slotted on the practice squad currently).

- Kicker: Now that his groin injury seems to be 100%, Caleb Sturgis is showing he can kick, climbing back into the battle with incumbent Dan Carpenter. I still give the nod to Sturgis based on his salary as well as the team using a draft pick on a kicker.

- Returners: The primary return man will be Marcus Thigpen, both kicks and punts. Behind him, I have Nolan Carroll returning kicks, based purely on his speed, while Brian Hartline is listed as the reserve for punts. Using a starting receiver as a punt returned is probably not ideal, but given how the Dolphins used Davone Bess last year as a sure handed punt returned for kicks deep into Miami territory, they will likely look for a guy they can rely upon in those situations. If DeAndre finds his way onto the roster, he takes both of those positions.

How did I do? Let me know where you see changes in the comments.