Last season I made some posts about our then rookie RT Jonathan Martin. These posts went through, play by play, some of Martin's games and described how he did to the best of my limited abilities. It was a fun process, though time consuming (which is why there were only a couple). Unfortunately, I lack the expertise to do a really in depth analysis. I have never played football or studied the game that in depth. I can’t tell you about things like footwork, and even the best analysis cannot tell you much if the assignment isn’t clear. Still, I can use my eyes and give my best account.

Here I give a brief description of each play Martin was in and how he did. I try to describe the type of formation we were in, since keeping an RB or TE on Martin’s side more consistently may show lack of trust (which didn’t seem to be the case here). I have also provided a screen shot for illustrative purposes, although if you don’t get to see the action, it is only somewhat helpful.

Obviously, this is only the HoF game, and Martin played against a backup DE. Still, I hope this will help address some of the claims being made about our LT position… or at least our starter.

I welcome any and all constructive comments and criticisms! Help me with my terminology and understanding of the game please! 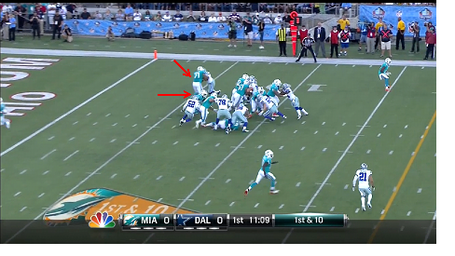 Miller was heading left, and was probably looking to run between the LG and C. Maybe he was trying to look at which gap to hit. In any case, Martin plays this fine. I can’t know his exact assignment, but he pushes his man left, up and out of position to make a play. 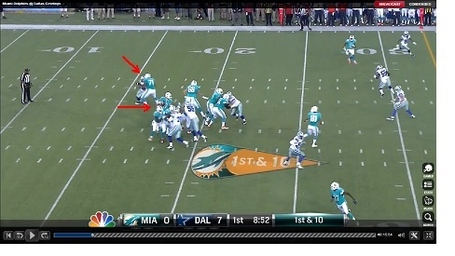 Here, the pressure got to Tannehill, but it was Clabo’s man that sacks him. The entire right side of the pocket collapses, with Hayden (Clabo’s assignment) and Bass (Clay and Miller) forcing Tannehill to run. It was in circumstances like these that Marino would have had that uncanny awareness and he would have hopped left to the LT’s side and possibly made a play. Martin clearly leads his man around and out of the play. Truth is, last season, Martin handled these types of rushes decently as well. What is different from what I remember last season was that they usually covered Martin with a TE or RB on his side. They didn’t do that this time.

The top arrow shows Martin keeping Tannehill clean. The lower arrow shows Tannehill, with the pocket collapsing on him. 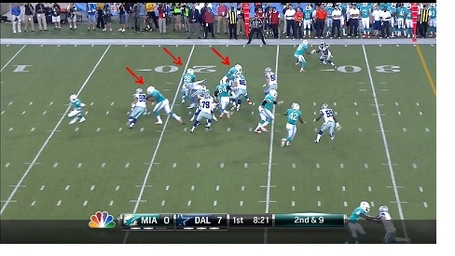 2nd Down: Single Back set – 3 WRs and the TE lines up on the left – Miller runs left for a nice gain.

Martin takes on Hayden since Pouncey and Incognito both pull. He gets off quick. I almost thought it was a false start. He does his job and keeps his man completely out of the play.

The left most arrow is Martin. The middle arrow is Miller. The right most points to Pouncey and Incognito pulling 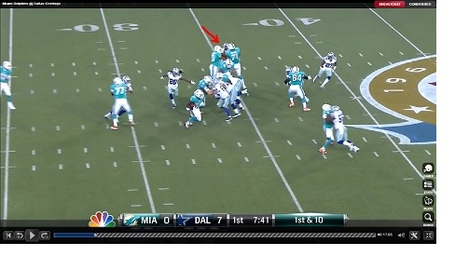 1st Down I formation slot right. The TE (Dustin Keller) is again lined up left. Run right by Miller for another nice gain.

They run away from Martin. He and Keller both take on Wilbur, but it is irrelevant to the play.

The arrow is Martin and Keller 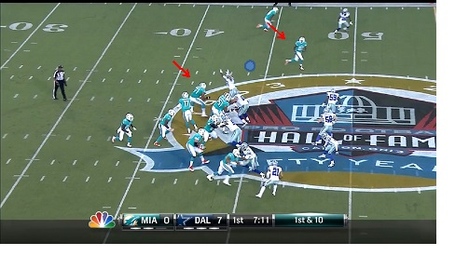 1st Down I formation Slot left. Incomplete to McNutt

Tannehill gets the ball out really quickly (and throws behind McNutt, who drops it). Martin is not really involved in the play. The DE is able to get his hands up, but I am not sure that made a difference.

The left arrow is Martin, the right McNutt. The blue circle is the ball. 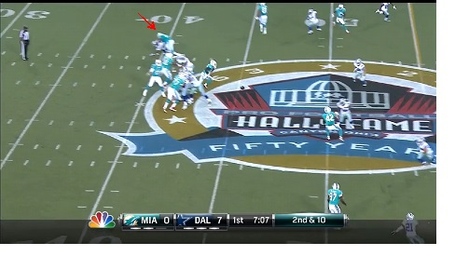 2nd Down Single Back, slot right (TE on left side) Incomplete to McNutt.

The ball could have been thrown a lot more accurately, but McNutt also drops it. The ball leaves Tannehill’s hands fairly quickly and Martin’s guy (Wilbur) would have been irrelevant. That being said, he tried to go around Martin, who basically pancakes the guy.

The arrow shows Martin pancaking the guy, although the ball has already left Tannehill’s hands at that point. Sorry for the blurry pic. 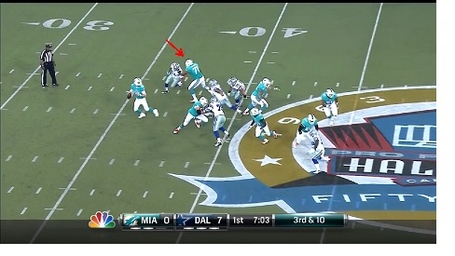 Now, this play is interesting. It looks like it was intended to be a screen. They let Hayden go flying in, and had it been executed better, Miller would have had space to catch the ball and make a play. I don’t know enough to describe what exactly happened, but there is no way Tannehill would have been able to get the ball to Miller, who did not come open before Wilbur, soon followed by Hayden, pressured him.

As to Martin, some are saying that he may have let Wilbur in as part of the setup for the screen. I don’t quite know if that is the case. To me, it looks more like Tannehill was expecting a bit more time than Martin gave him. It is possible that Miller did not come open on the screen in time either. Still, considering where the screen was being setup (middle right), I can’t easily understand why Martin would let himself get beaten that badly. Wilbur was already well up field of Miller, and keeping Tannehill’s backside clean probably wouldn’t have undermined the screen. It was the DT Hayden that was being lured in. Hayden may have also come in faster than expected , but I think if Martin keeps Wilbur clear, that gives a split second more for Miller to come open, which may have been enough.

If we agree that Martin got beat, it was in typical fashion to last season, he allowed the guy to rush him while chopping at him (IDK technical terms that well). He didn’t beat the guy to the punch, and he got run past. Of course, if Miller comes open sooner, it might have been for a decent gain all other things being equal. 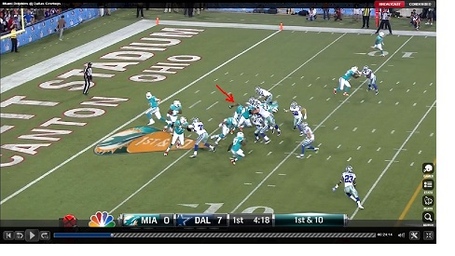 He is basically irrelevant to the play, pulling and throwing himself in the pile in the middle. Unless his assignment was different, there isn’t much to say. Clabo is not fully at fault, but he allows his guy back into the mix. 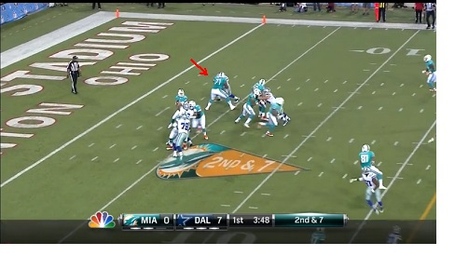 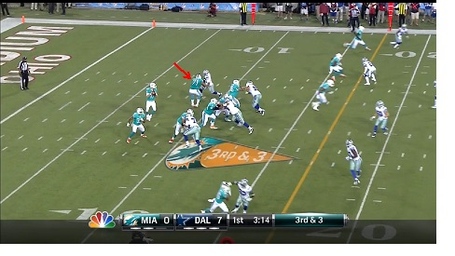 Wilbur runs around the TE (who goes downfield anyway) and Martin drops back to engage him at the moment of this image. Martin engages him, and keeps his hands in front of him, not losing the boxing match and affording Tannehill enough time to throw without pressure. If Tannehill had held the ball a bit longer though, it may have impacted the play, but it didn’t happen.

Conclusion: It is too small a sample size to determine much except he isn’t totally lost out there like some believe. Still, I am not sure how much he was tested. He continues to be fine against speed moves, keeping his guy in front of him, but he still struggled in one play (at least in my opinion) with the same types of moves that caused him problems last season. Philbin had noted this, saying that he needed to work on his punches like a boxer. Moreover, he went mostly against Wilbur, a backup. That being said, if he keeps working on his technique, there is no reason from this game to think he won’t be adequate for the role. Clabo had a worse game if you ask me.