The Miami Dolphins cut their roster down to 75 players yesterday. By the end of the week, they will have played their final preseason game, and done another round of roster cuts. Before we get there, let's take another shot at projecting the 53 man roster.

Our projected Miami Dolphins 53-man roster continues to adjust to on the field performances and off the field activities. This week, the projection reacts to both the team's 17-16 loss to the Tampa Bay Buccaneers as well as the 75 man roster cuts that were completed yesterday.

With all of that, it's time to once again take a look at Miami's roster and try to project the 53 man roster. 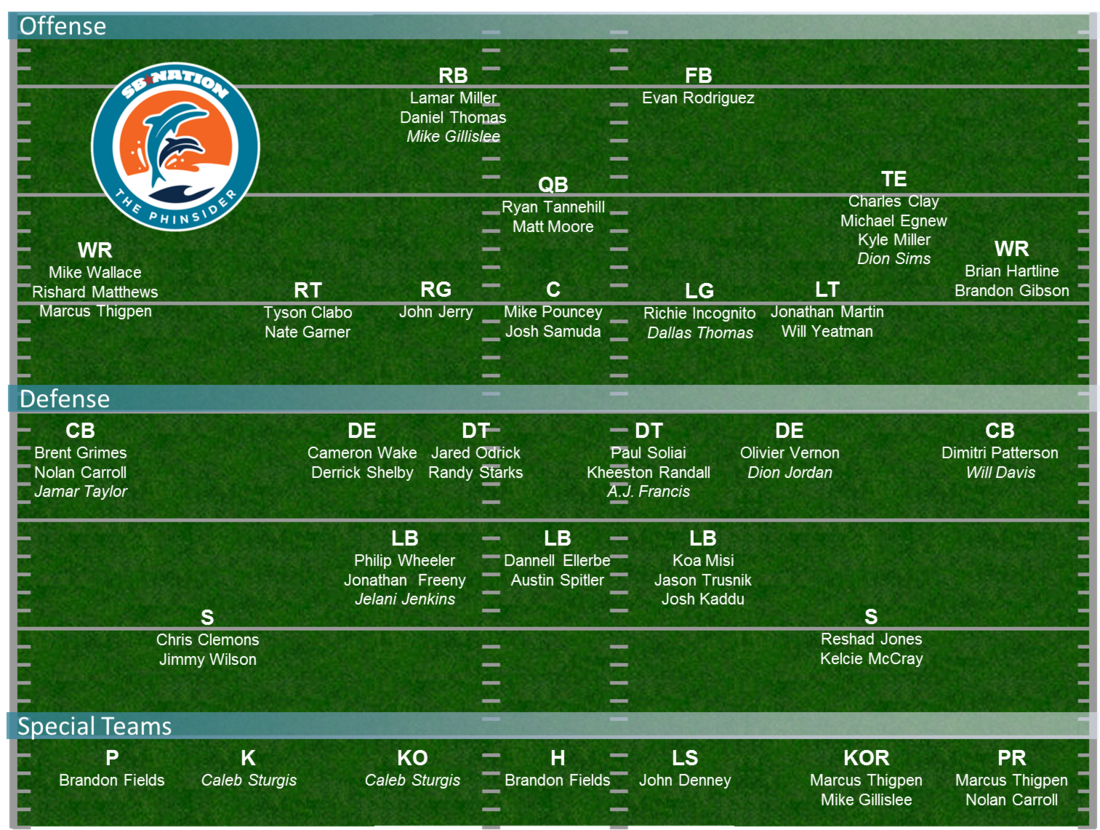 - Quarterbacks (2): Ryan Tannehill and Matt Moore make the roster, while Pat Devlin and Aaron Corp miss out. Devlin goes to the practice squad, letting him have another year in the system, while not taking a roster spot. If he is poached, Corp takes that slot.

- Running Backs (3): Lamar Miller, Daniel Thomas, and Mike Gillislee claim roster spots, with Marcus Thigpen giving the team a fourth rusher if he needs to move back from his wide receiver position. Jonas Gray ends up missing the roster simply because the numbers don't line up in his favor. He does have practice squad eligibility, so the team could try to stash him there, but he would likely end up signed somewhere else.

- Wide Receivers (5): Nothing changes among the wide receivers on the roster. Mike Wallace, Brian Hartline, and Brandon Gibson are joined by Thigpen and Rishard Matthews. The Dolphins also keep Brian Tyms and Chad Bumphis, but on the practice squad.

- Tight Ends/Fullbacks (5): With Dustin Keller injured, the Dolphins are looking for a way to get similar production from the tight end position. With that in mind, they keep Charles Clay, Michael Egnew, Dion Sims, and Kyle Miller, as well as fullback Evan Rodriguez.

- Offensive Linemen (9): Up until the cuts were announced yesterday, I was beginning to think both John Jerry and Lance Louis were going to make the roster. Obviously, Louis is no longer a member of the team, although I have a feeling we have not seen the last of him. The Dolphins could keep him in mind once the season starts, signing him to a non-guaranteed minimum salary instead of the full guaranteed salary that would happen if he were on the roster in Week 1. As for the other guys joining Jerry on the roster are Tyson Clabo, Mike Pouncey, Richie Incognito, Jonathan Martin, Nate Garner, Josh Samuda, Dallas Thomas, and Will Yeatman.

- Linebackers (8): The linebackers have been as low as five making the roster on our projections so far, and now up to eight. It's a ridiculous number, but it also makes sense. Philip Wheeler, Dannell Ellerbe, and Koa Misi are the starters, Austin Spitler and Jason Trusnik are special teams guys who can give you some quality play if needed on defense, and Jonathan Freeny, Jelani Jenkins, and Josh Kaddu are all young guys who are still developing but show flashes of potential. Obviously, this position is extremely deep, so cutting someone here, potentially for a wide receiver or a cornerback is a possibility.

- Cornerbacks (5): Speaking of corners, we still have five on the roster, and the same five. Brent Gimes, Dimitri Patterson, Nolan Carroll, Will Davis, and Jamar Taylor fill out the position. If Richard Marshall had not been cut, he probably makes the team as well, which would be the sixth. With him gone, I don't know if anyone else can make the cut, especially with Jimmy Wilson being able to cover both safety and corner.

- Safety (4): No change to the safeties. Reshad Jones and Chris Clemons remain the starters, with Jimmy Wilson as the primary reserve. Kelcie McCray has upside, but could be falling closer and closer to the wrong side of the bubble.

That fills out my fourth preseason projection of the 53-man roster. What are your thoughts?