Anatomy of a Play: Dolphins' Brent Grimes called for Pass Interference against Buccaneers

The Miami Dolphins lost to the Tampa Bay Buccaneers on Saturday, 17-16. Leading up to the Bucccaneers first touchdown, Miami cornerback Brent Grimes was called for pass interference. Here's a look at what happened on that play.

Share All sharing options for: Anatomy of a Play: Dolphins' Brent Grimes called for Pass Interference against Buccaneers

In the first half of the Miami Dolphins' 17-16 loss to the Tampa Bay Buccaneers on Saturday, the Dolphins gave up a one yard touchdown run to the Buccaneers. However, it was a play a couple before that one that really got the most attention. Miami Dolphins cornerback Brent Grimes was beat in single coverage and was called for defensive pass interference. The penalty was actually a good one, since without the interference, Tampa Bay likely scores on that pass.

But, why was Grimes all alone deep? And, what happened with the pass rush, allowing Buccaneers quarterback Josh Freeman the opportunity to even attempt the pass? Let's take a look: 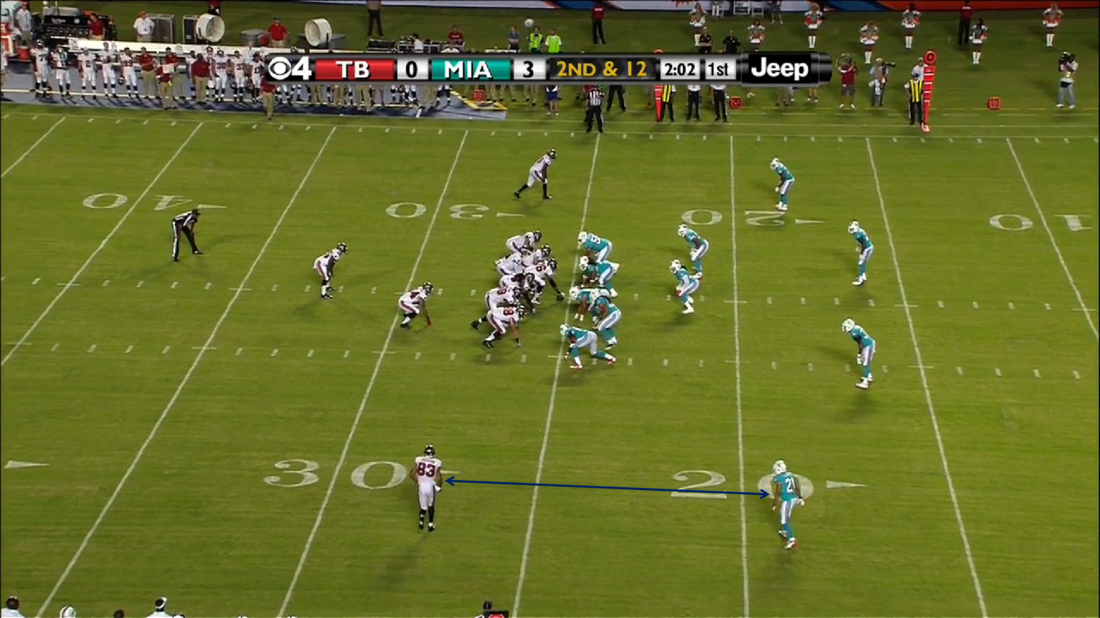 Prior to the snap, Grimes is lined up opposite Tampa Bay's Vincent Jackson. The Dolphins are showing blitz, with Philip Wheeler on the line of scrimmage, with the Dolphins almost appearing to be in a quarters defense, with the two safeties and two cornerbacks nearly even across the field.. 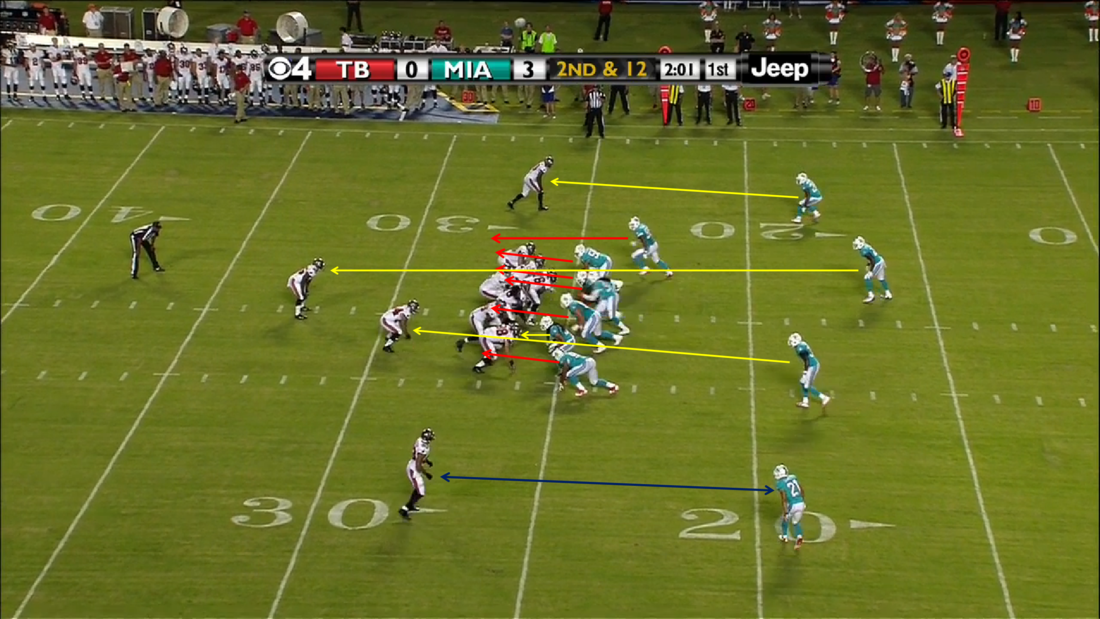 But, at the snap, the blitz changes and the Dolphins move into a strict man-to-man coverage. There are six Dolphins rushing the passer (red arrows) as Dannell Ellerbe and Koa Misi come on the blitz, while Wheeler backs out into coverage on tight end Luke Stocker. Grimes remains with Jackson, while safety Chris Clemons has tight end Tom Crabtree coming out of the full back position. On the other side of the field, Safety Reshad Jones is matched up against running back Mike James and cornerback Dimitri Patterson is line up against wide receiver Mike Williams. 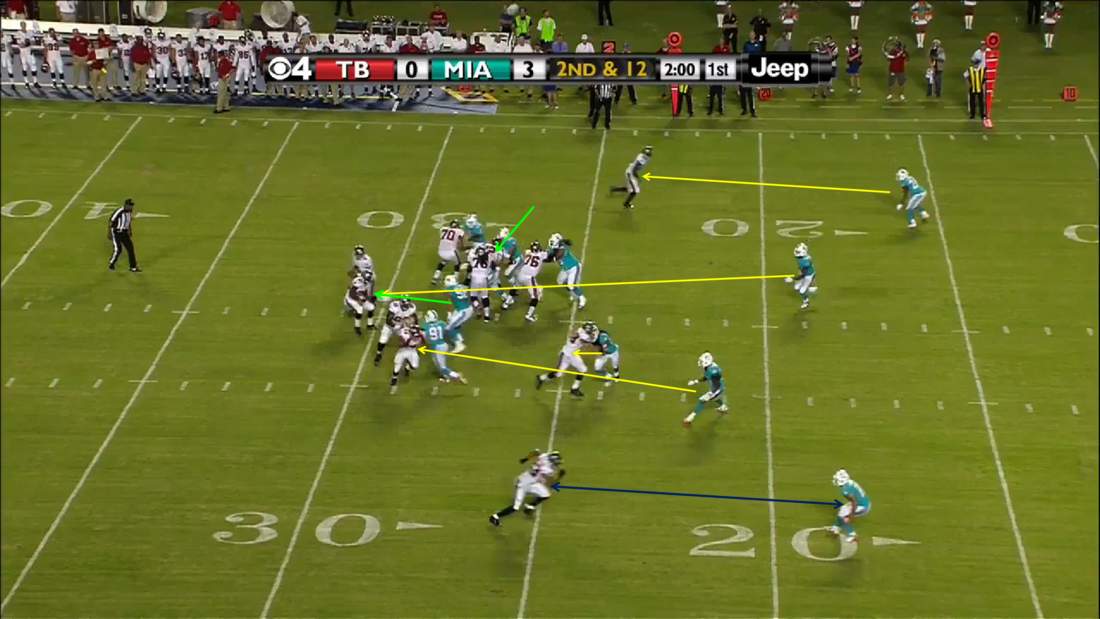 Taking out the arrows on the pass rush, we now mark two key blocks that gives Freeman the time he needs. The first is center Davin Joseph (75) who washes Ellerbe over to the left side of the offensive line, and keeps the front of the pocket clean. The other is about to happen, as James cuts Jared Odrick right in front of Freeman. You can also clearly see the man assignments within the secondary. 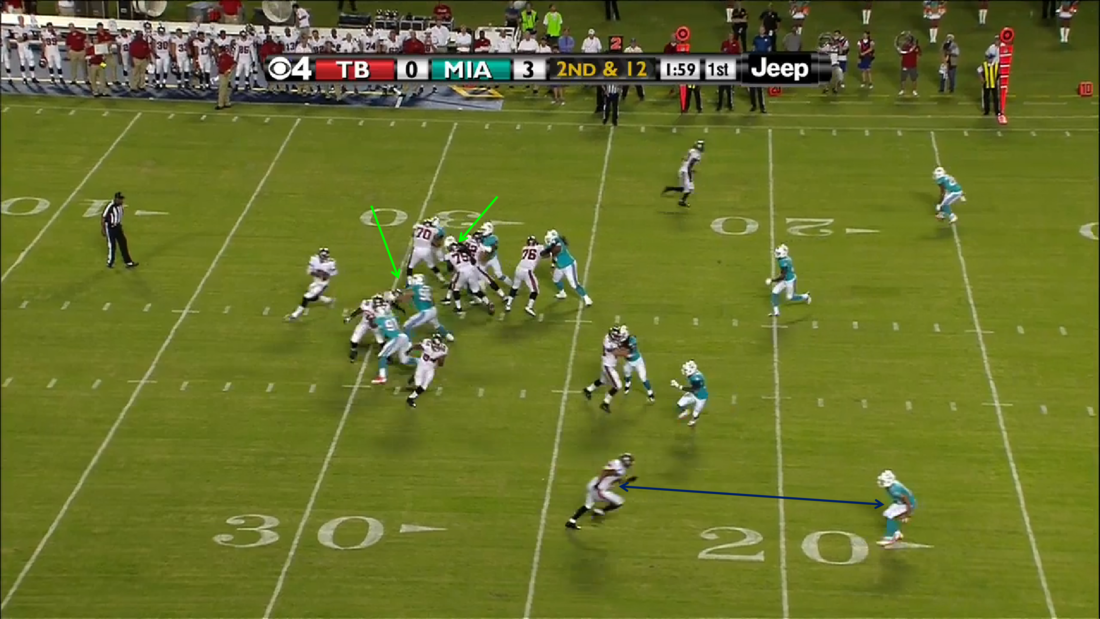 A second later, and the cut on Odrick is happening. The block on Ellerbe is even more clear. Meanwhile, Jackson is starting to close on Grimes. 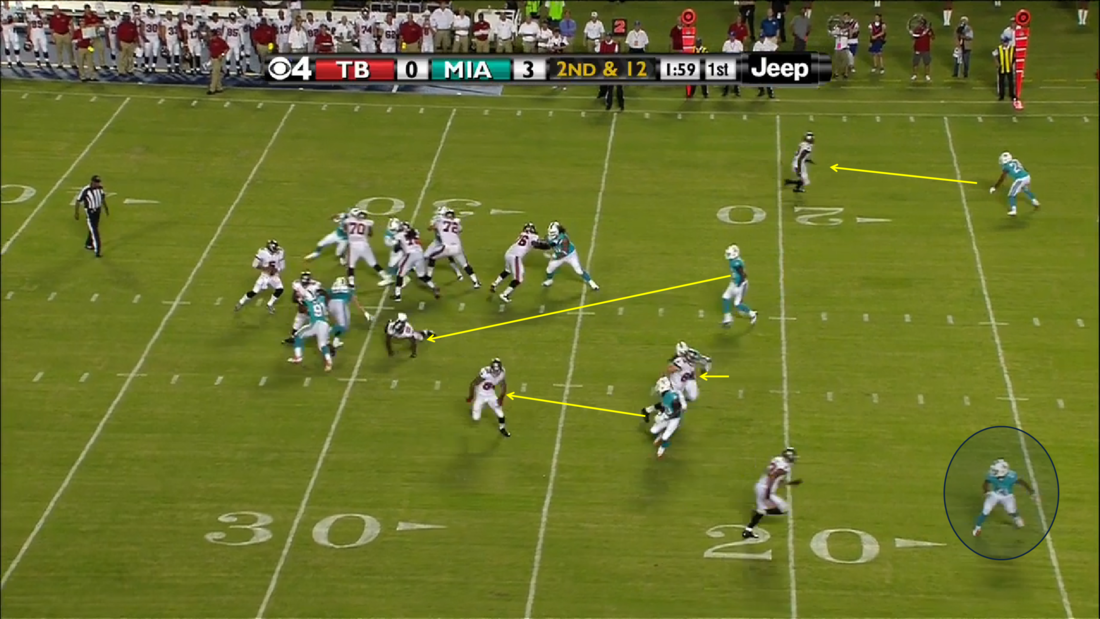 The routes from the Tampa Bay receivers have pulled the Miami safeties closer to the line of scrimmage, leaving the cornerbacks as the two deep players. Normally, for Grimes, this has not been a problem. However, in this moment, Grimes guesses wrong and turns his hips to try to keep Jackson along the boundary. As soon as he sees that, Jackson cuts on a post route, which has Grimes turned the wrong way. Grimes has great closing speed and can usually correct for this kind of momentary mistake, but with no middle of the field support, that one step is all Jackson is going to need to score a touchdown on a completion from Freeman. 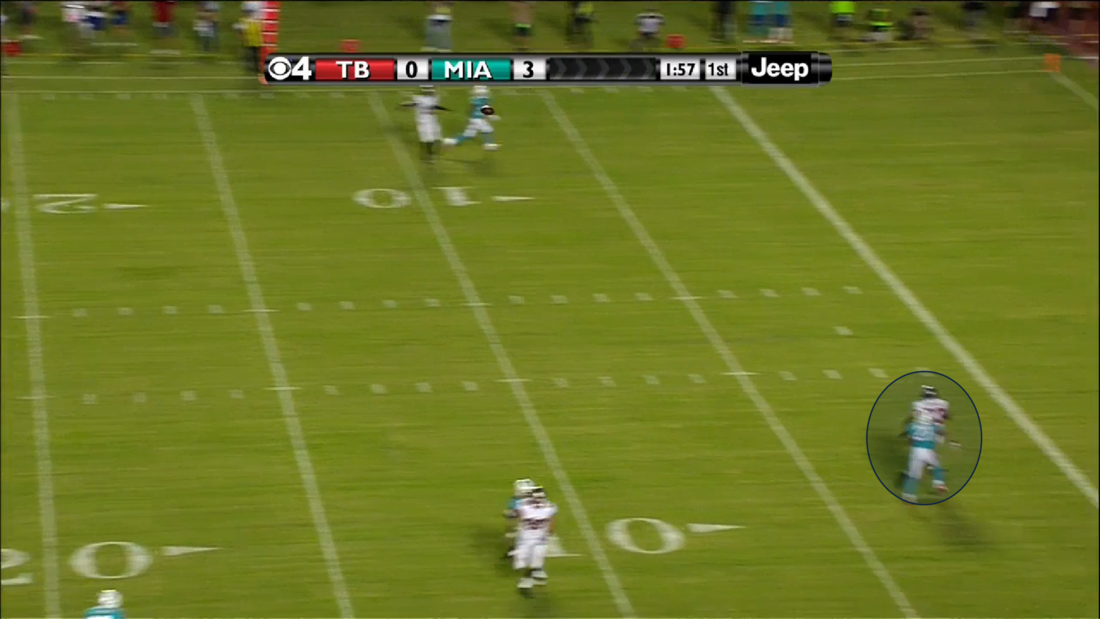 Unfortunately, there's no way to screenshot this any clearer. This is the moment when Grimes is interfering with Jackson. If you look up at the score line, you can see the ball just below the "MIA," and that one step Jackson has on Grimes is going to result in a touchdown with Grimes doing something to slow him down.

The interference was the right play in that moment for Grimes. It's his job to stop that touchdown, and give the defense another shot at stopping the score. Really, the Dolphins covered the play well, except for the turn from Grimes. Tampa Bay simply blocked along the line of scrimmage better.