Anatomy of a Broken Play: The Outside Zone Run

The outside zone run, a staple of the zone-blocking scheme, is a commonly used play in the Miami Dolphins' playbook. During Saturday's preseason loss to the Tampa Bay Buccaneers, Miami ran the play once on the opening drive with less than favorable results. Sometimes, when things don't go according to plan, it's interesting to dig into the particulars of what the team was trying to do on a play and why they didn't get the job done.

Share All sharing options for: Anatomy of a Broken Play: The Outside Zone Run

A little over five minutes into the game, the Dolphins were just yards away from their first opening-drive score of the preseason. They had just converted a fourth down on a pass to Brian Hartline and now had a 1st-and-Goal at the 5-yard line.

Miami dialed up an outside zone run to the left. Unfortunately, the Buccaneers were able to get penetration and tackled running back Lamar Miller almost immediately deep in the backfield.

The play went into the books as a 5-yard loss for Miller. But to anyone who watched the play, it's clearly much too simple to assign blame to Miller, who was engulfed by two Tampa Bay defenders shortly after taking the handoff. Let's take a closer look at what caused this play to fail:

The Dolphins aligned in their most commonly-used formation (the single back set, or 'Ace' formation) with their base personnel grouping (Rishard Matthews subbed in for Hartline, who was hurt on the previous play). 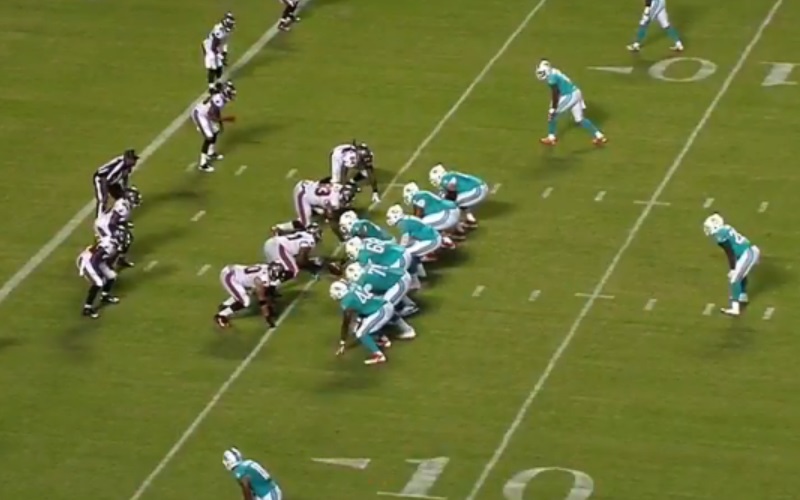 Tampa Bay, with its nickel personnel on the field, lined up in a 4-man 'under' front, meaning the 1-technique defensive tackle is lined up on the strongside (or side the tight end is lined up on) of the formation. An overhead look at the offensive and defensive fronts would look like this: 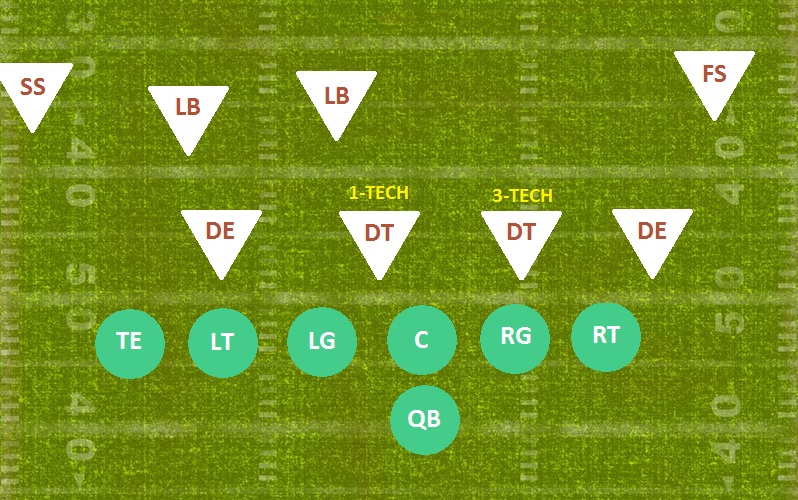 In the zone blocking scheme, each lineman generally blocks the guy lined up across from him, with certain guys moving on to the second level. Which guys those are is dictated by the defensive alignment. It requires a collective understanding by all blockers on the line for the system to work the way it's supposed to; i.e. they must all see the same thing.

For a nice explanation of the zone blocking scheme that Miami uses, read this by Mr. Smart Football himself, Chris Brown.

With that in mind, we'll spotlight Dolphins center Mike Pouncey, who is shaded playside by No. 97, Buccaneers rookie defensive tackle Akeem Spence. Normally, a player in Pouncey's position would be expected to reach and block Spence, most likely by himself or with a chip by the left guard.

With the left tackle blocking the defensive end, both the left guard (Richie Incognito) and the tight end (Charles Clay) would be expected to advance to the second level and take on the two linebackers directly in front of each. The strong safety, lined up in the box to the left side of the formation, was the assignment of the down-blocking wide receiver. 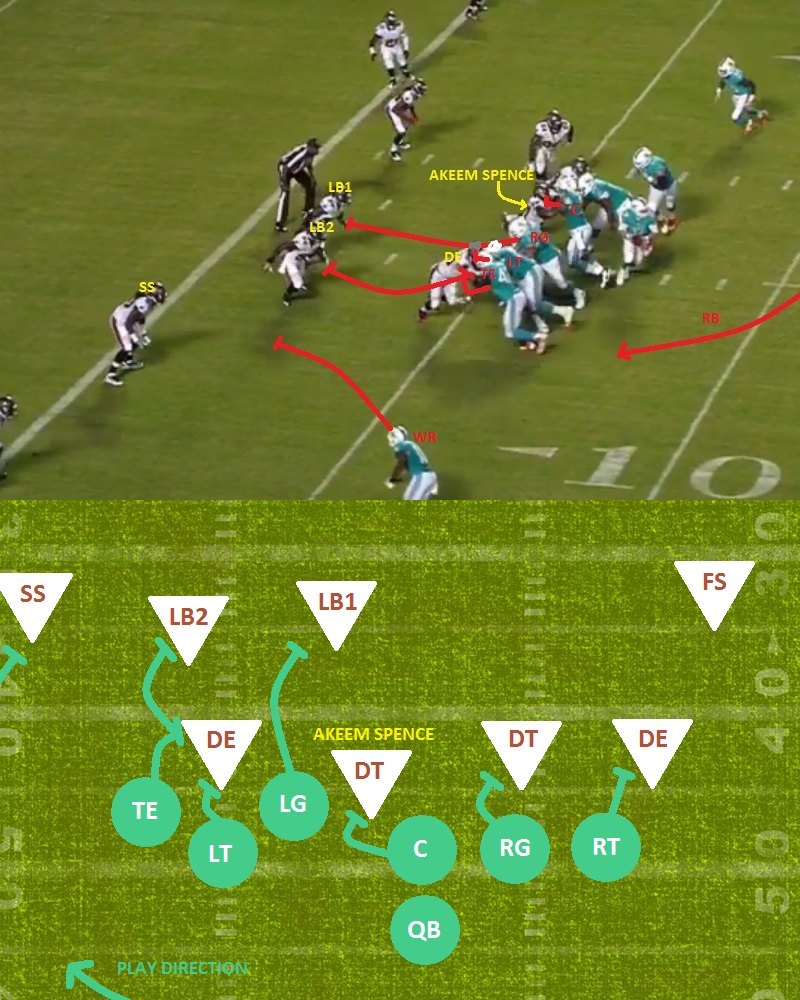 Instead, Incognito blocks the outermost linebacker (LB2), while the right guard attempted to help block Spence. The most logical inference is that Pouncey was expected (by his other linemen) to take the inside linebacker (LB1), which, because of Spence's positioning and burst off the ball, would have been nearly impossible.

The unblocked linebacker shot into the backfield and along with the strong safety (who was supposed to be blocked by the wide receiver), took down Miller for the massive loss. 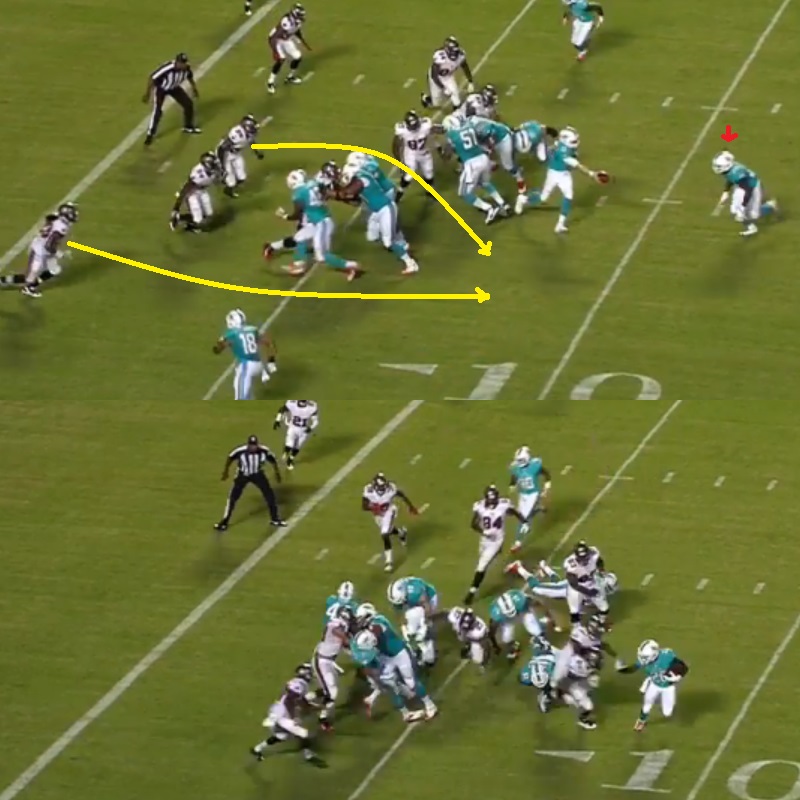 Of course, as Bill Belichick once very astutely described, it's difficult for a third party reviewing the film to know exactly where the breakdown was. Like I mentioned earlier, the zone blocking scheme requires a good technical understanding from each blocker for the unit to operate properly. Whether it was Pouncey or both Incognito and right guard John Jerry, who had the incorrect read or action on this play is not completely evident.

Observing the film, there was another apparent mistake in this play that contributed to its failure. And this one relates to simple math.

Looking at both team's formations and alignment, the Dolphins simply do not have enough blockers to put a hat on each defender. 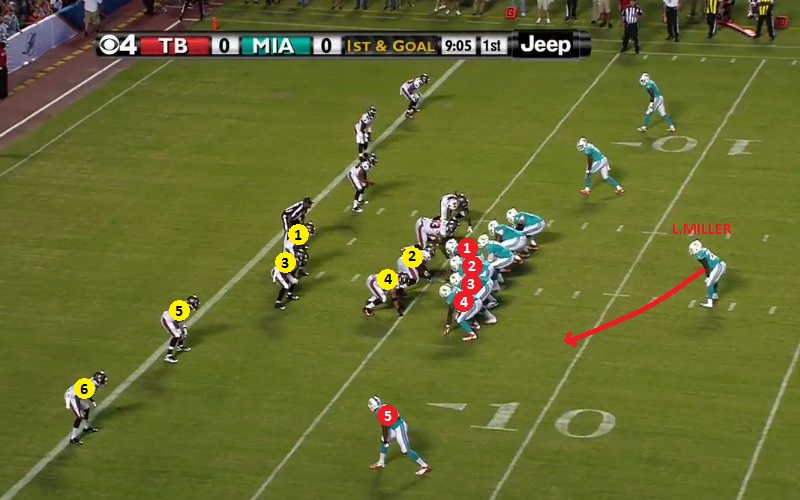 Tampa Bay has six total defenders within five yards of the line of scrimmage on the playside, while Miami has just five blockers and does not pull any linemen from the backside.

Missed assignments on the line aside, this play was unlikely to get out of the backfield cleanly from the start. The defense knew the offense had a short field to work with, so they moved both safeties to linebacker depth. This made it easy for strong safety Mark Barron to make a play as soon as he recognized it was a run to his side.

It seems the smartest play would have been for quarterback Ryan Tannehill, seeing how the defense was playing, to check into another play.

Instead, Miami ran a play directly into the teeth of the defense, and the offensive line poorly executed the blocking assignments they had. The lost yardage helped the Dolphins fail to get seven points out of a redzone trip, despite getting another five plays inside the 10-yard line due to a defensive penalty.