The Miami Dolphins are preparing to face the Tampa Bay Buccaneers in the Preseason's Week 3. Before we get there, let's take another shot at projecting the 53 man roster.

Our Miami Dolphins 53-man roster projection took a couple of big hits this week. First, the team lost tight end Dustin Keller to a catastrophic knee injury during Saturday night's game against the Houston Texans. Then, the team messed up our roster by releasing cornerback Richard Marshall, who has been competing for a starting spot and seemed a sure lock to make the roster.

Now, it's time to dive back in and project the 53 man roster again. 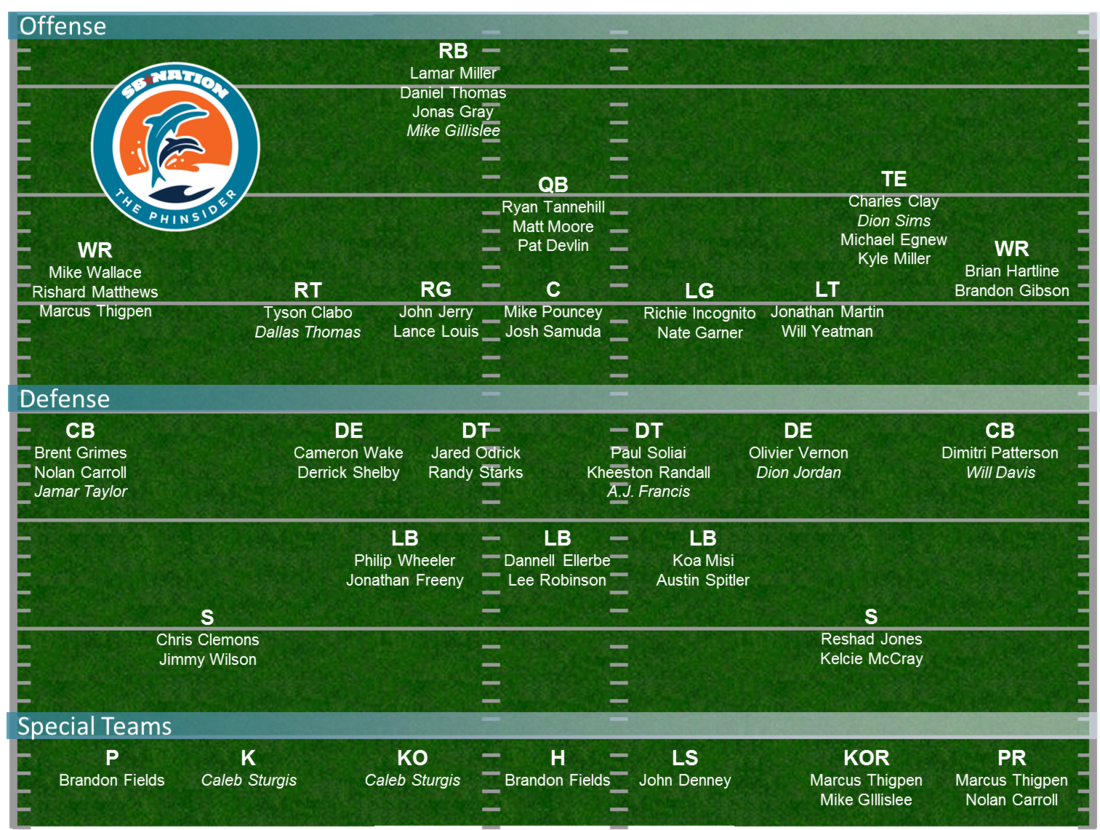 - Quarterbacks (3): Ryan Tannehill, Matt Moore, Pat Devlin. Moore has not played well as of late, but will still hold on to the second string position. Devlin will be the third quarterback unless he cannot get healthy, which would open the door to Aaron Corp.

- Running Backs (4): Just like at quarterback, there's no change at running back. Lamar Miller will be the lead back, with Daniel Thomas sharing time with him. Jonas Gray and Mike Gillislee will get some playing time and continue to develop behind the lead two.

- Wide Receivers (5): The receiver drop from six to five this week, as I make more space for an additional lineman. Mike Wallace, Brian Hartline, and Brandon Gibson will man the top three slots. Rishard Matthews seems to have a stranglehold on the fourth position, and Marcus Thigpen will likely serve as the fifth receiver.

- Tight Ends/Fullbacks (4): Keller's injury really sends this role into a tizzy. Charles Clay is the most likely to take on the Keller role, putting him atop the depth chart. Dion Sims and Michael Egnew will both likely have roles in the offense, meaning the decision comes down to Kyle Miller, Jorvorskie Lane, or Evan Rodriguez. This could be the hardest decision on the team. Based on the lack of use of a true fullback in the preseason games, the nod goes to Miller at this point.

- Offensive Linemen (10): The offensive line moved up to 10 players this week. With all the injuries to the guard position, with John Jerry, Lance Louis, and Nate Garner all fighting back from injury at this point, the need for an extra player on the offensive line makes a lot of sense. Jerry slides back into the starting lineup, with Josh Samuda moving back to reserve center. That makes the starting lineup Tyson Clabo, Jerry, Mike Pouncey, Richie Incognito, and Jonathan Martin. Behind them, Louis, Garner, Dallas Thomas, and Will Yeatman are joined by Louis, who up until now has been among the last cuts.

- Defensive Linemen (9): The defensive line remains unchanged. Cameron Wake, Jared Odrick, Paul Soliai, and Olivier Vernon are the starters, with Derrick Shelby, Randy Starks, Kheeston Randall, and Dion Jordan as the primary reserves. Shelby could be the bubble guy from this group, simply because the team has Wake, Vernon, and Jordan, along with Jared Odrick who has played defensive end, and koa Misi, who has been lining up on the defensive line at times this preseason. If the team needs to find a roster slot, it could be at the cost of Shelby. A.J. Francis continues to make the roster, simply because if he is waived and stashed on the practice squad, he probably will not be there long.

- Linebackers (6): The sixth linebacker returns to the roster after only carrying five last week. The starters are still Philip Wheeler, Dannell Ellerbe, and Koa Misi. Behind them, Jonathan Freent, Austin Spitler, and Lee Robinson make the squad backing up the first team. Spitler, and the released Jason Trusnik, are both capable of making the roster, based on their special teams play, but do not be surprised if one or both are released. Jelani Jenkins, Josh Kaddu, and David Hinds are the most likely to fill Spitler's slot if he were to be cut.

- Cornerbacks (5): The Dolphins release of Richard Marshall was somewhat surprising, but it does not make an additional roster space for the cornerbacks. Instead, the sixth linebacker makes the roster, and the Dolphins go with five corners. Brent Grimes and Dimitri Patterson are the top two corners, with Will Davis and Nolan Carroll fighting for the nickel/third corner role. Jamar Taylor continues to rehab and work his way back from sports hernia surgery.

- Safety (4): While Reshad Jones and Chris Clemons are both locks to make the roster, and be the starting safeties, Jimmy Wilson and Kelcie McCray could be moving back toward the bubble. Wilson is probably safe, but he has to start making better on the field plays, and stop getting the penalties he has had in the first two preseason games. Wilson also has the ability to slide back into a cornerback role if necessary, given Miami carrying just five corners. McCray is harder to predict. He received praise during training camp, but has not been transforming those good practices into game performance. Don Jones, Keelan Johnson, and Jordan Kovas could be a threat to the role if the coaches do not see anything more from McCray in the rest of the preseason.

- Returners: Marcus Thigpen continues to be the primary returner. Mike Gillislee could be an effective returning behind him, while Nolan Carroll could slide in as the reserve punt returner.

That fills out my third preseason projection of the 53-man roster. What are your thoughts?