Dolphins vs Texans: What to watch

The Miami Dolphins visit the Houston Texans later tonight. What should we be looking for from the Dolphins tonight? Let's take a look.

Share All sharing options for: Dolphins vs Texans: What to watch

The Miami Dolphins face off against the Houston Texans later tonight.  Earlier today, we discussed the position battles on the Dolphins' roster, including the right guard and wide receivers.  But, what should we be watching for tonight as the Dolphins play in their third preseason game of the year? 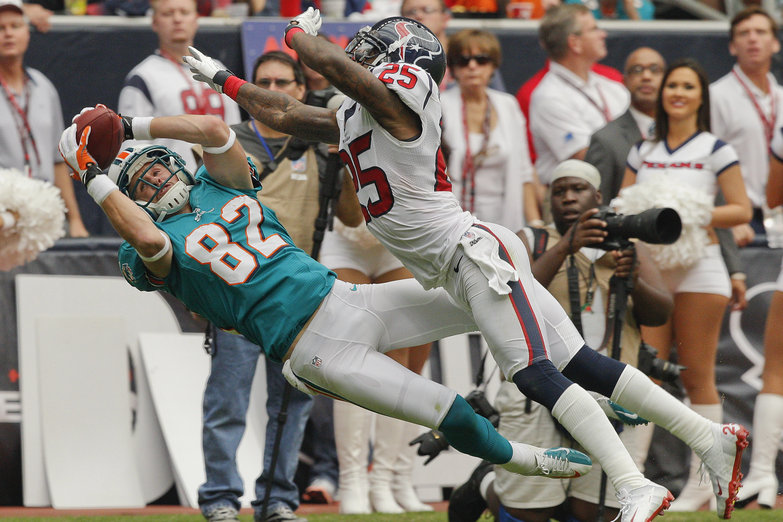 The Miami Dolphins are in Texas today to face the Houston Texans. We have everything you need to know, including game time, how to watch on TV, listen on radio, stream online, game odds, the announcers for the game, and lots more.

The offensive line needs to start to build chemistry. While the line has struggled early this year trying to find the best group of five players, four of the five starting positions seem to be locked in now, and the chemistry needs to start to build.  All five linemen have to know where the others will be on every play, and know when a player is going to be passed.  That only comes from getting reps together.  Whether or not Josh Samuda, who is expected to start tonight at right guard, holds on to keep the position when the season starts, the line has to start figuring out their systems and communications tonight.

Will the offense show anything more tonight? They probably will not, given Joe Philbin and Mike Sherman want to keep as much of the offense under wraps as possible.  However, after two games of seeing the offense struggle early, adding in a couple of the more successful, and more advanced, plays at the start of the game could be an important part in adding to the developing timing between Ryan Tannehill and the receivers, as well as give some confidence to everyone.

Where will the turnovers come from this week? The Dolphins coaching staff has stressed the need to win the turnover battle each week.  In the Hall of Fame Game, Miami lost that battle 0-2.  Against the Jacksonville Jaguars, the Dolphins came out on top 4-1.  Where will the team find the turnovers against the Texans?  Can Will Davis pull in another interception?  Can the defense force a fumble - and actually fall on the loose ball?

How will Caleb Sturgis handle being the only kicker on the roster? With the Dolphins releasing Dan Carpenter this week, the place kicking duties are all rookie Caleb Sturgis' now.  While he has said all the right things to the press, will he handle the pressure of knowing he is the guy now?  Most likely, this is an area Sturgis will make into a non-story, but for now, there is still a chance that the pressure could cause issues.

Will the cornerbacks be able to handle the Texans' receivers? This will be a big test for Brent Grimes, Richard Mashall, and Dimitri Patterson.  Andre Johnson and rookie DeAndre Hopkins are both expected to play, and it will be the first time the Dolphins are facing a true number one receiver after Dez Bryant and Justin Blackmon missed the Cowboys and Jaguars games, respectively.  How will they respond?  How will Reshad Jones and Chris Clemons rotate to provide support?  It will be a fascinating part of the game to watch.