The Miami Dolphins are preparing to face the Houston Texans in the Preseason's Week 2. Before we get there, let's take another shot at projecting the 53 man roster.

My issue from last week, trying to figure out how to cut the Miami Dolphins' 90 man roster down to 53, continues this week. I am positive that, if I posted a projected roster later today, it would be slightly different. There are things on this roster that I am not comfortable with, like just five linebackers, but if I want to keep five defensive tackles, I have to make the sacrifice somewhere.

That being said, here is my current projection of the Dolphins' 53-man roster, broken down into the depth chart. It's wrong. I'm telling you that right now. But, at this point in the preseason, it's about as good a breakout as can be done. 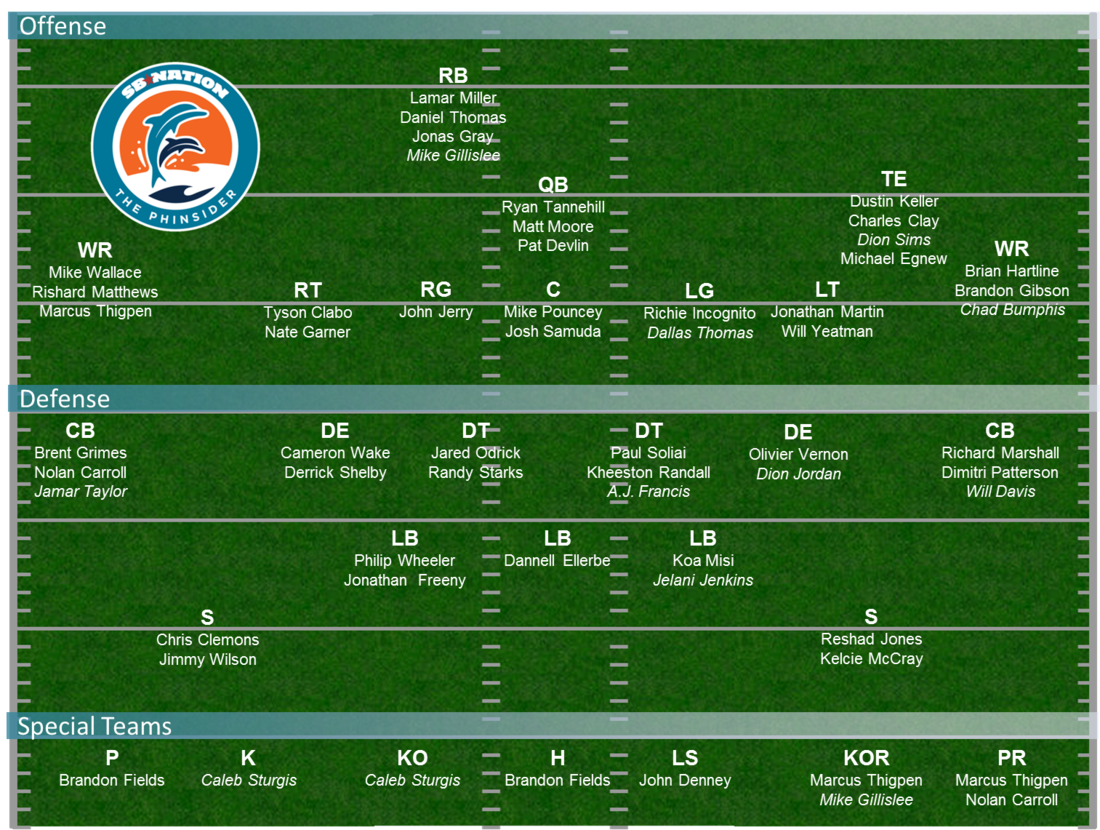 - Quarterbacks: No change. It's still, and will continue to be, Ryan Tannehill, Matt Moore, and Pat Devlin. Aaron Corp is back in camp, but he's just a roster body at this point.

- Running Backs: What? The running backs drop from five last time to four this time with the loss of Marcus Thigpen? What is wrong with me? I currently have Lamar Miller as the starter, and believe he will stay there, but I cannot yet completely rule out Daniel Thomas, who is having a good training camp and is better in pass protection. Behind them, I have Jonas Gray and Mike Gillislee.

- Wide Receivers: Oh, there's Thigpen. All is right in the world again. I have the Dolphins keeping five receivers, plus Thigpen. The obvious ones are Mike Wallace, Brian Hartline, and Brandon Gibson. Rishard Matthews has seemed like the fourth receiver on the team throughout training camp, and that's where I have him at this point on the roster. The final receiver slot is wide open still. I continue to give it to Chad Bumphis, but I think this weekend's game could make or break Bumphis' chances at the roster.

- Tight Ends/Fullbacks: For the second straight week, I have no fullbacks making the roster. I think the Dolphins will use the tight ends as the lead blockers, with Charles Clay leading that move. Dustin Keller is the top tight end, with Clay behind him. Then, you can give the third slot to either Dion Sims or Michael Egnew. I think all four will make the roster, and all four will see playing time.

- Offensive Linemen: While I mixed up the lineup for the offensive line, I still have the same nine players making the roster. I think John Jerry going back to the starting right guard position. Nate Garner's injury is concerning, since he really is a player who could fill in anywhere on the line if/when needed. Tyson Clabo, Mike Pouncey, Richie Incognito, and Jonathan Martin are all still the other starters. Behind them, Garner, Josh Samuda, Dallas Thomas, and Will Yeatman round out the group.

- Defensive Linemen: Here's where I changed things, adding a ninth defensive lineman to the roster. As starters, I still have Cameron Wake, Jared Odrick, Paul Soliai, and Olivier Vernon, with Randy Starks and Dion Jordan seeing plenty of playing time. Derrick Shelby backs up the defensive ends, while Kheeston Randall makes the roster at defensive tackle. The ninth member of the group is rookie defensive tackle A.J. Francis. I like what he has done so far through camp, and I think, especially with the injury to Starks, along with both Starks and Soliai scheduled to be free agents after this year, keeping another defensive tackle makes sense.

- Linebackers: And, because I added a ninth defensive lineman, I had to make a cut I did not want to make. That was Austin Spitler dropping out of the linebackers group. I really do not like having just five linebackers. I feel like there needs to be six. I just cannot make the numbers work that way. Philip Wheeler, Dannell Ellerbe, and Koa Misi continue to be the starters, with Jelani Jenkins and Jonathan Freeny rounding out the group. I think by the time the roster really does go down to the final 53, either Spitler comes back onto the roster, or Lee Robinson could work his way onto the roster, but I cannot do it right now.

- Cornerbacks: The top six remain exactly the same. Brent Grimes, Richard Marshall, and Dimitri Patterson are all the starters (yes, I am considering the nickel position a starter), with Nolan Carroll and Will Davis earning two of the last three positions. I still give the nod to Jamar Taylor as the final corner, assuming he is able to stay healthy.

- Safety: The safeties also remain the same, with Chris Clemons and Reshad Jones as the starters, with Jimmy Wilson and Kelcie McCray backing them up.

- Kicker: Caleb Sturgis. He officially won the position battle this week, so that makes it pretty clear he is on the roster.

- Returners: Marcus Thigpen continues to hold the top returner positions, with Mike Gillislee taking the second kickoff returner. I think the team really likes that idea, and it gives Gillislee a chance to gain experience at the NFL level. At punt returner, if something happens to Thigpen, Carroll is probably the player that makes the most sense to fill in for him.

That fills out my second preseason projection of the 53-man roster. What are your thoughts?