The Miami Dolphins are holding a training camp competition for the limited spots on the running back depth chart, and, if reports from camp are to be believed, for Lamar Miller's starting job. Here's the progress report for each contender through two preseason games:

Since the departure of Reggie Bush, the presumption among most (including those who report on the team) was that the starting tailback job belonged to Miller. Last week, offensive coordinator Mike Sherman said he considers the competition between Miller and Daniel Thomas for the starting spot "pretty close."

That may surprise (and disappoint) many, but Miller's preseason performance lends some credence to the possibility. He committed the cardinal sin of turning the ball over on the very first offensive play of the preseason, a mistake likely to test the patience of the turnover-obsessed head coach of the Dolphins, Joe Philbin.

After that blunder, Miller carried the ball reasonably well in the first two preseason games, gaining 27 yards on just four carries. Beyond running the ball and catching a single pass, Miller did little when on the field, depriving us of analyzing his perceived biggest weakness and primary reason he'd lose snaps to Thomas: pass blocking.

There are three more preseason games, and if there truly is a narrowing gap between the top two players on the depth chart, expect Miller to be asked to show more on the football field against first-team opponents, possibly including some pass protection.

One of the most polarizing players on the Dolphins roster, Thomas has struggled in his two seasons in the NFL, never sniffing the potential that the team saw in him when they traded up in the second round of the 2011 Draft to select him. Perhaps sensing that Miami was ready to move forward with Miller as their primary ball-carrier, Thomas reported to camp in shape, in good health and with renewed focus on improving his craft, giving his coaches notice that he was in Miami to play.

"You can tell when he came back in the spring he totally changed his body. He cut his body fat. He's quicker and faster than he's been the last two years here," running backs coach Jeff Nixon said, according to the Sun Sentinel.

"I'm looking for a great year from Daniel Thomas. There's a competition. The starting running back job is on the line and he's stepping up."

Unfortunately, Thomas' preseason performance thus far looks similar to what people are accustomed to seeing from the third-year back. Eight carries for 24 yards, which adds up to a 3.0 YPA, is simply poor production. But, being the preseason, the first two games are an opportunity to analyze his play to a deeper level, and see what's behind the numbers.

First, on more than a couple carries, Thomas was the victim of poor blocking. On this play, Miami left guard Dallas Thomas was blown off the ball by Dallas Cowboys' defensive lineman George Selvie, giving Thomas absolutely nowhere to go. 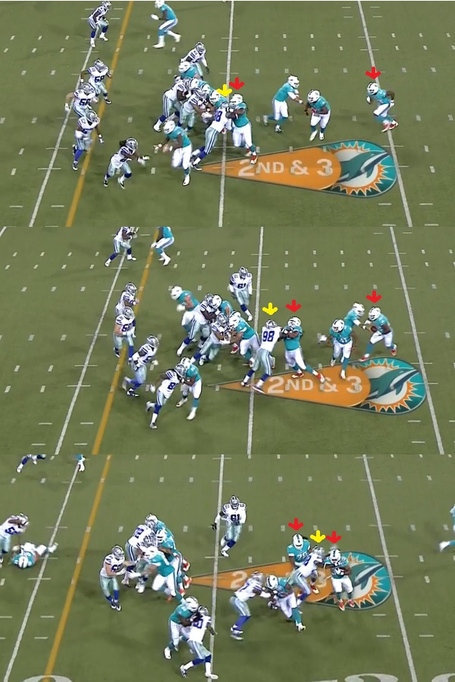 The play counted as a 6-yard loss, a disastrous result that could not be attributed to Thomas. Removing this single play from the box score increases his preseason per-carry average to a respectable 5.0 yards.

But, on another play, Thomas exhibited a flaw that has been the root of his career struggles thus far.

A few months back, I analyzed Thomas's game and concluded that he often did not follow the path laid out by his blockers, usually resulting in a short gain or loss when a big play was right in front of his eyes.

On this play against the Jacksonville Jaguars, the Dolphins offensive line did their job by creating a hole where the play was designed to go (path A, yellow arrow). Each defender is blocked and the back has all but a red carpet laid out to the third level of the defense. 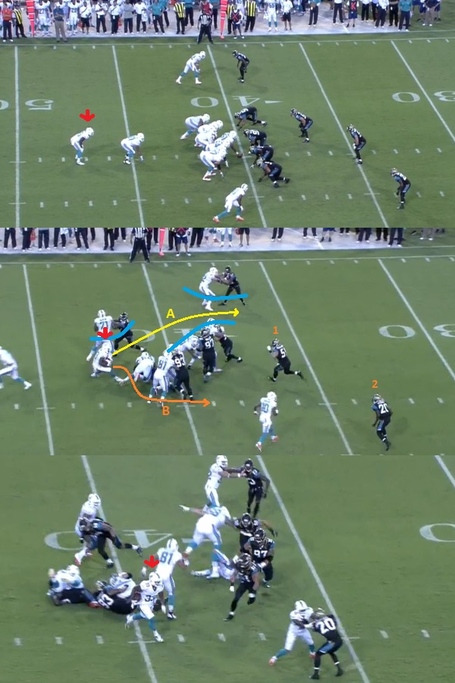 Instead, Thomas bounces the run back inside (path B, orange arrow) for no real reason, where two unmarked defenders are freely closing on the play. The good news is he was able to gain 8 yards, ultimately making it a positive play on the stat sheet. The bad news is that Thomas displayed a bad habit that has caused him to squander opportunities many, many times in the past.

All in all, Thomas' performance this preseason has been better than his stat line suggests. But the continuation of his mistakes is the most concerning takeaway as he competes with Miller for the starting job.

One of the biggest preseason standouts for the whole roster is Gray, who leads the team with 26 offensive touches. He's also compiled the most rushing yards and scored both of the Dolphins' two rushing touchdowns.

The undrafted prospect out of Notre Dame, who spent last season on Miami's injured reserve, displayed power running and speed to get around the edge, at least against second- and third-string competition. He also flashed the ability to catch the ball out of the backfield.

While exhibiting some good traits, Gray's production hasn't been spectacular so far this preseason. He followed a seven-carry, 41-yard performance against Dallas with a very underwhelming 14-carry, 32-yard showing in Jacksonville. Removing his 29-yard scamper from the Hall of Fame Game, Gray has managed just 2.2 YPA on 20 carries.

It is important to note, however, that Gray has also fallen victim to some of the poor blocking that affected Thomas.

Gray has some clear talent, but he'll need to take advantage of the three remaining preseason games to show he's worth keeping on the roster. The Dolphins kept three tailbacks on the roster last season (not including Marcus Thigpen), and if they plan to do the same this season, it leaves one spot between Gray and the final guy on the list, Mike Gillislee.

Gillislee holds a fifth-round draft position, giving him an edge in the competition with Gray for a spot on the roster. Both players have been given the same number of offensive snaps, and though Gray has been given a few more touches, the two have similar raw numbers. That's about where the similarities between these backs end.

In contrast to Gray's straight-ahead power running style, Gillislee is a shifty, elusive-type running back. It's a small sample size, but it seems he much prefers to put a move on a defender than make an attempt to beat them to the edge or power through them.

Coach Philbin commented after the Dallas game that "there might have been some dancing going on" while Gillislee carried the ball, indicating that he'd like to see more decisiveness out of the rookie. The Dolphins' blocking scheme is largely predicated on the tailback seeing the hole and making a strong cut through it, and Gillislee showed the ability on a strong fourth quarter run in Jacksonville that went for 11 yards.

He'll need to show more of that ability for the rest of the preseason to solidify a spot on the team.

Another skill he'll want to show, which was considered a strength coming out of the University of Florida, is his pass blocking. Rarely did he have a one-on-one blitz pickup assignment in the two games, but when he did, he didn't execute very well.

On this play, Cowboys linebacker Taylor Reed blitzes from the middle linebacker spot. Gillislee sees the pressure coming, and instead of squaring up to engage the defender, he goes for the cut block. 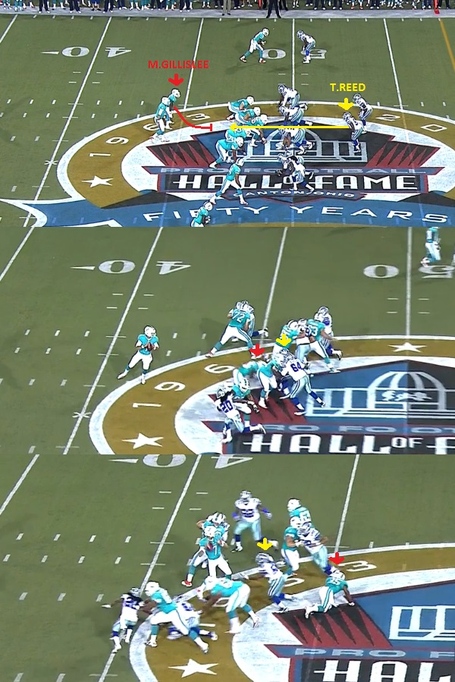 The defender easily evades the block and sacks quarterback Pat Devlin, who deserves partial blame for holding the ball too long.

This, like I mentioned, was one of few pass blocking examples that the entire group of running backs had in the two games, and it'd be silly to consider this single play any type of judgment on Gillislee's ability.

But if the rookie wants to help his chances on the roster, and for playing time once he's there, he'll want to sharpen that area of his game during his remaining preseason snaps.