The Miami Dolphins returned to practice on Tuesday after a day off following their 27-3 win over the Jacksonville Jaguars on Friday. Notably absent, however, was third overall pick Dion Jordan.

The Miami Dolphins held their 14th practice of the 2013 training camp today, getting back to work after a day off following Friday night's game against the Jacksonville Jaguars.  The practice, however, did not include third overall pick Dion Jordan.

Jordan missed the early portion of training camp as he rehabbed from offseason shoulder surgery.  He has seen his workload increase over the past week, but only took seven snaps, the fewest of any defender, against the Jaguars.  Then, he was notably absent today.

After practice, head coach Joe Philbin was asked about Jordan's status.  "I'll talk about anybody who was at practice today," came Philbin's standard reply.

The Dolphins traded up from the twelfth overall pick in April's Draft to grab Jordan with the third pick.  The move, which surprised nearly everyone, cost Miami one of their second round selections, but gave the Dolphins a potential dynamic defensive weapon, who can rush the passer or drop into coverage.

No reason for Jordan's absence has been reported.  He did start the practice in the bubble before he, apparently, returned inside the training facility.

Miami continues to practice without John Jerry.  Last year's starting right guard, Jerry has been out with a knee injury since the first week of camp.  In his place, the Dolphins have been rotating players into the position, trying to find someone to fill the role.  During the Jaguars game, Josh Samuda started, but was replaced during the first quarter by Nate Garner.  Today, offensive coordinator Mike Sherman stated Samuda suffered a hand injury during the contest. 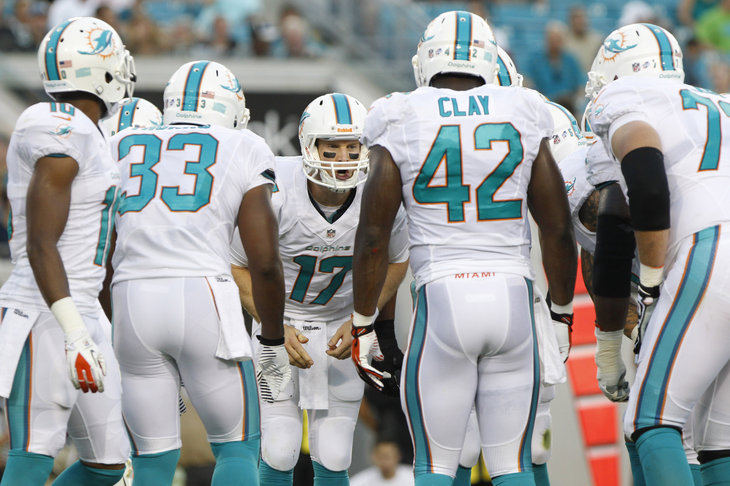 The Miami Dolphins beat the Jacksonville Jaguars Friday night. Here are the snap counts for every Dolphins player.

Samuda was back at practice today, however he only worked out as the reserve center while Garner continued to work at guard.

Defensive tackle Randy Starks was the lone player not to at least start the workout, while tight end Kelcie McCray began in the bubble before following Jordan into the facility.

The practice did feature the return of cornerback Jamar Taylor, who has been in and out of workouts the last few days as he recovers from sports hernia surgery, and wide receiver Rishard Matthews, who caught the highlight pass on the day, a deep ball from Ryan Tannehill.