When Miami Dolphins quarterback Ryan Tannehill threw his last pass Friday night against the Jacksonville Jaguars, one things was immediately noticeable. None of those passes had gone to wide receiver Mike Wallace. Why not?

Share All sharing options for: Ryan Tannehill to Mike Wallace does not materialize in Dolphins at Jaguars game

Immediately following the Miami Dolphins' 27-3 victory over the Jacksonville Jaguars on Friday night, questions about the lack of use of wide receiver Mike Wallace began.  The Dolphins' top free agent addition this year, Wallace was on the field for his first game action after sitting out the Hall of Fame Game.  However, second year quarterback Ryan Tannehill failed to even target Wallace when the two were on the field together.

The Jaguars appeared to be daring Tannehill to throw deep to Wallace, lining up in press man coverage on the speedster, with a single safety back deep.  Everything seemed to say the Dolphins would use their new weapon and pick apart the Jacksonville defense.  Yet it didn't happen.

With all the questions about why Miami did not utilize Wallace, I went back and looked at every pass from Tannehill. 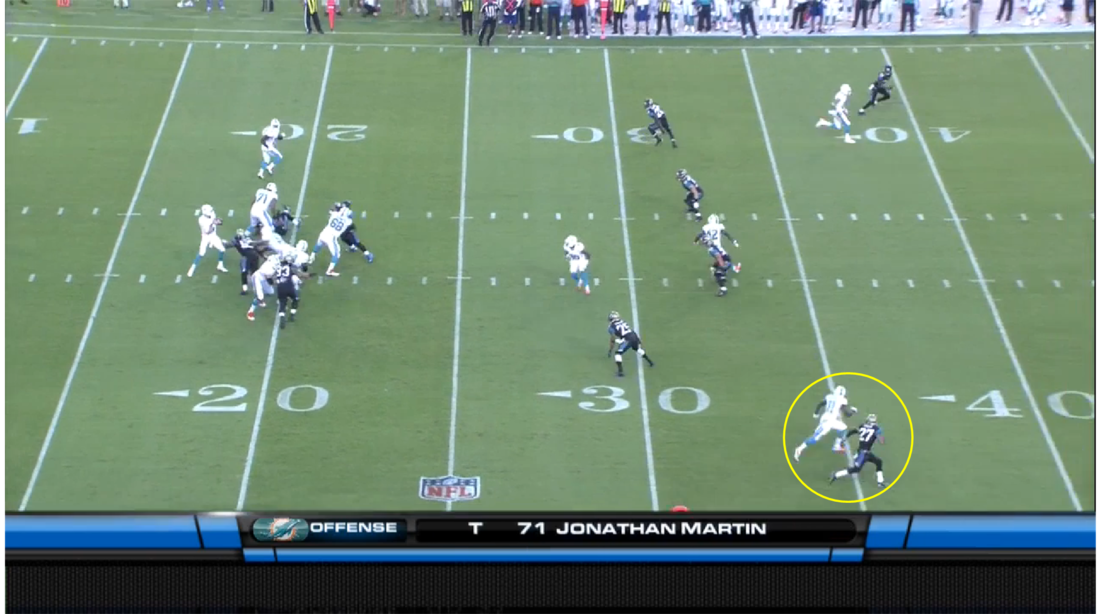 It appears Tannehill could have targeted Wallace on this play, although the safety is off screen, so there's no way to know for sure what Tannehill saw.  Of course, Tannehill is about to be sacked, so he probably could not have even gotten the pass off even if he was looking at Wallace.

On a side note, check out the pancake Jonathan Martin had on Jason Babin on this play. 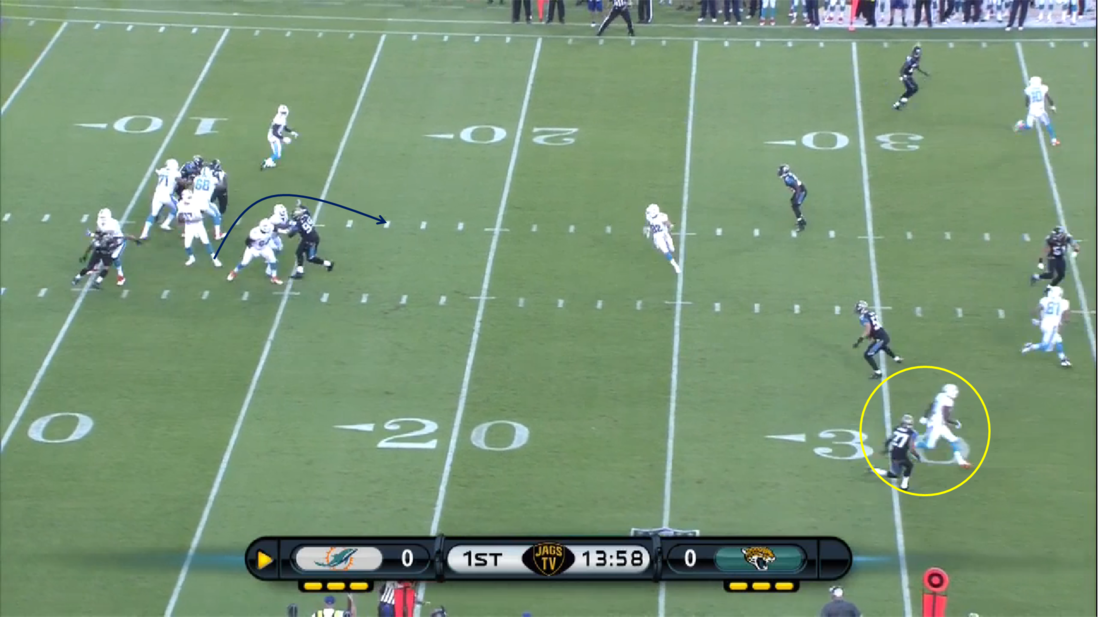 The pass rush gets to Tannehill on his second drop back as well, though he is able to scramble away from it.  He has no chance on this play to get the ball to a well covered Wallace.  He started to throw the ball to Hartline over the middle, but then bailed and gained two yards. 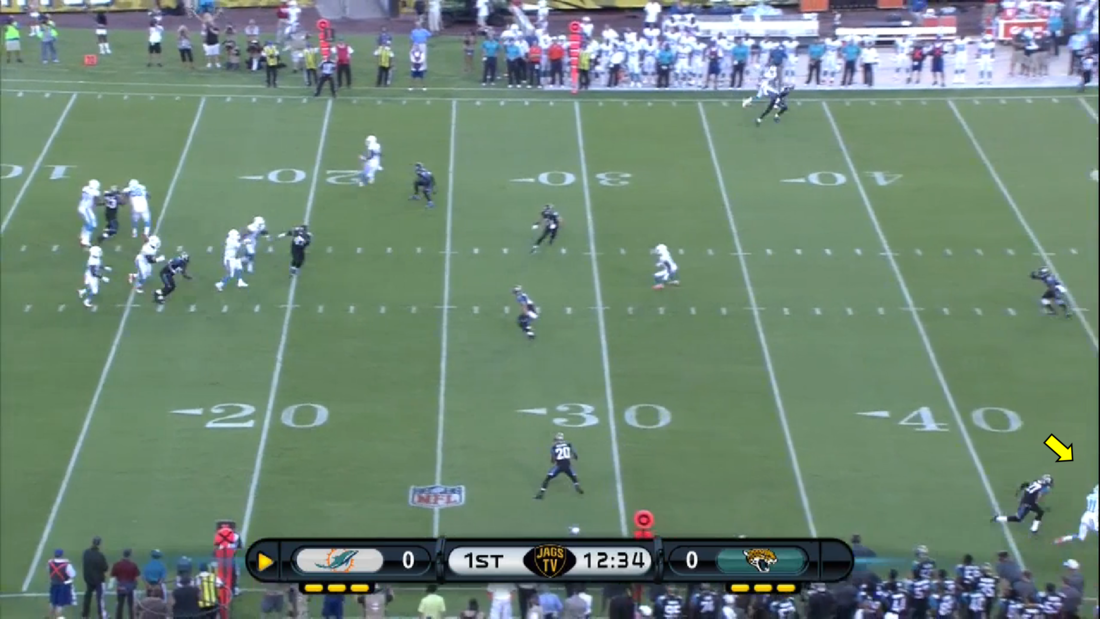 Just as Wallace starts to separate from coverage, Tannehill has to get rid of the ball.  He looked as though he was going to try to run for a few yards before he saw the defense split and Gibson come open in the middle of the field.  Tannehill made the right choice, but this could have been an opportunity to try going deep to Wallace if the pass protection had given Tannehill just a little more time. 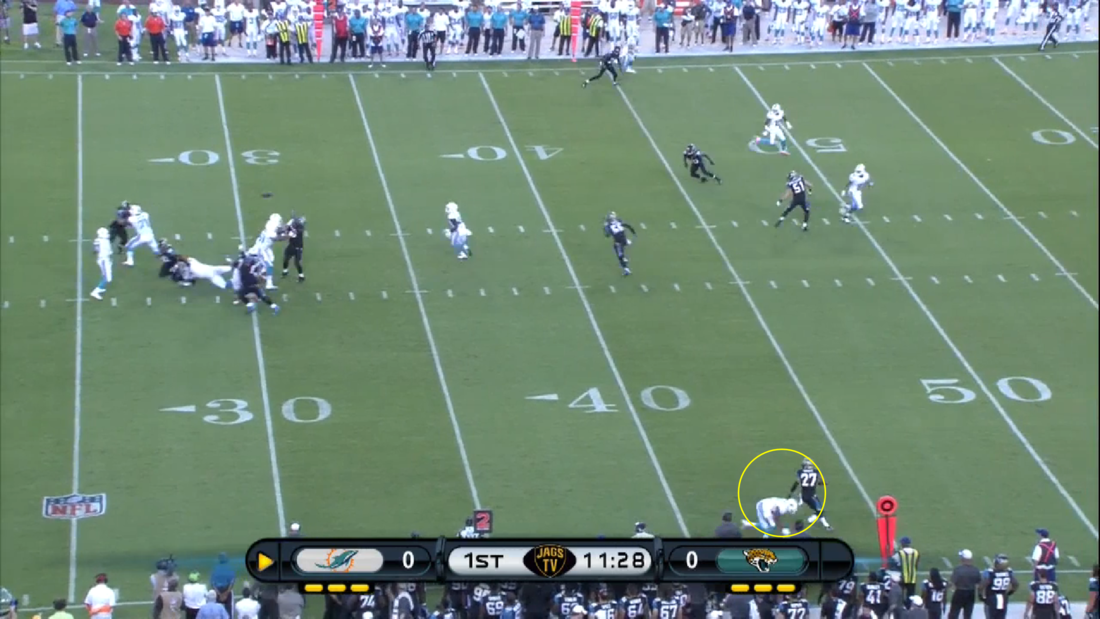 The pass rush is again coming for Tannehill.  This time, he stands in there and delivers to Miller, who drops a ball that hits him in the hands.  Wallace, meanwhile, got jammed just before Tannehill released the ball, and, as you can see, stumbles from it.  Between that stumble and the pass rush, there would have been zero chance for a Tannehill to Wallace connection. 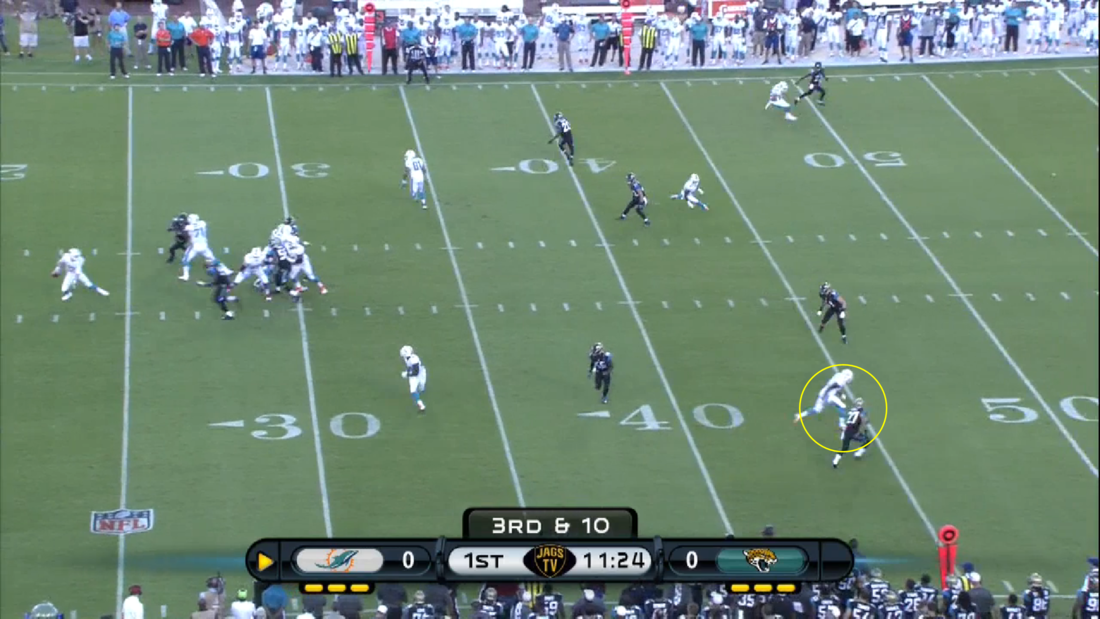 Tannehill is again running away from pressure.  He ends up throwing this ball away, with Miller being the closest receiver to the ball.

Side note: Although in this shot, it looks like Tyson Clabo completely blew his blocking assignment, that's actually the defensive tackle that Mike Pouncey and Josh Samuda were blocking who got stood up, then drifted around the rest of the line to come back in off the edge.  Clabo was initially responsible for the player Samuda has now engaged, while Clabo tries to react to the now free rusher.  The offensive line should do better, but it's not fair to Clabo to think he simply did not block someone. 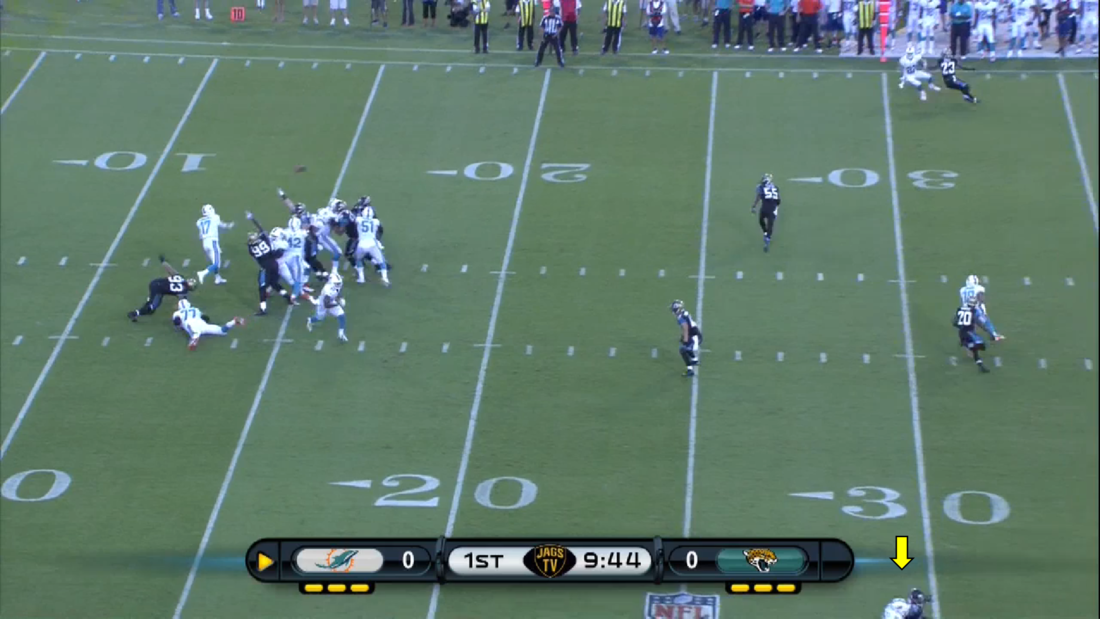 This play was clearly designed for Hartline the entire way.  Tannehill has already released the pass, even before Hartline has turned to find it.  Wallace, down at the bottom of the shot, was in tight coverage, so Hartline was absolutely the right choice here. 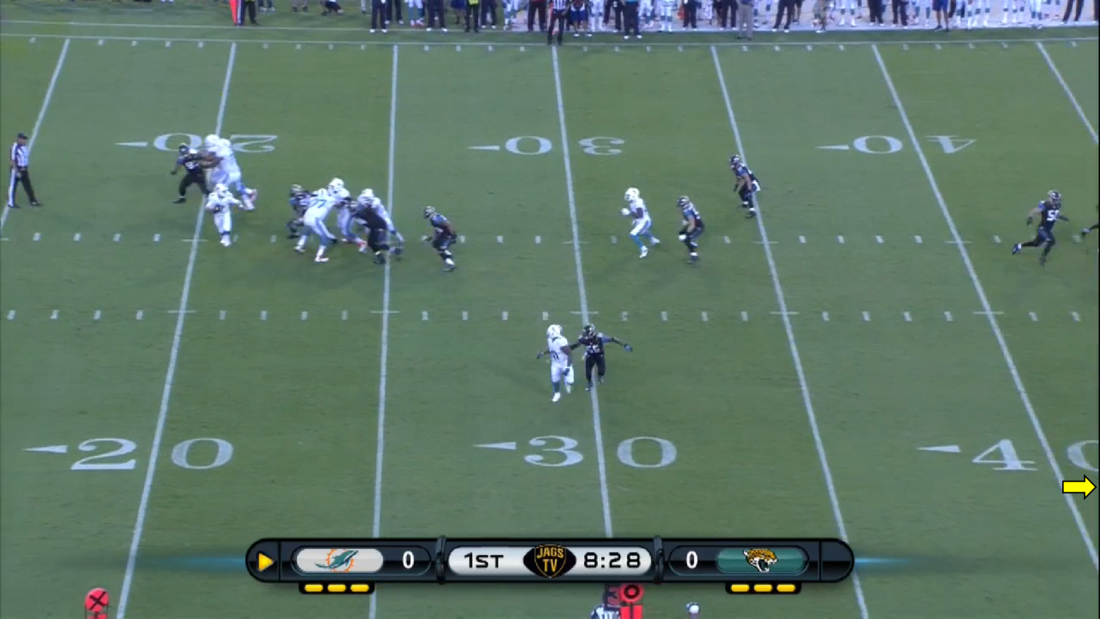 The story of most of these plays, Tannehill is again having to move due to pressure.  The Jaguars have solid coverage on everyone (assuming the two players running back to where Wallace is are joining a cornerback, putting three players on the Dolphins' number one), so Tannehill ends up throwing the ball to Clay on a crossing route.  Linebacker Russell Allen makes a great diving deflection to break up the pass just before Clay could haul it in. 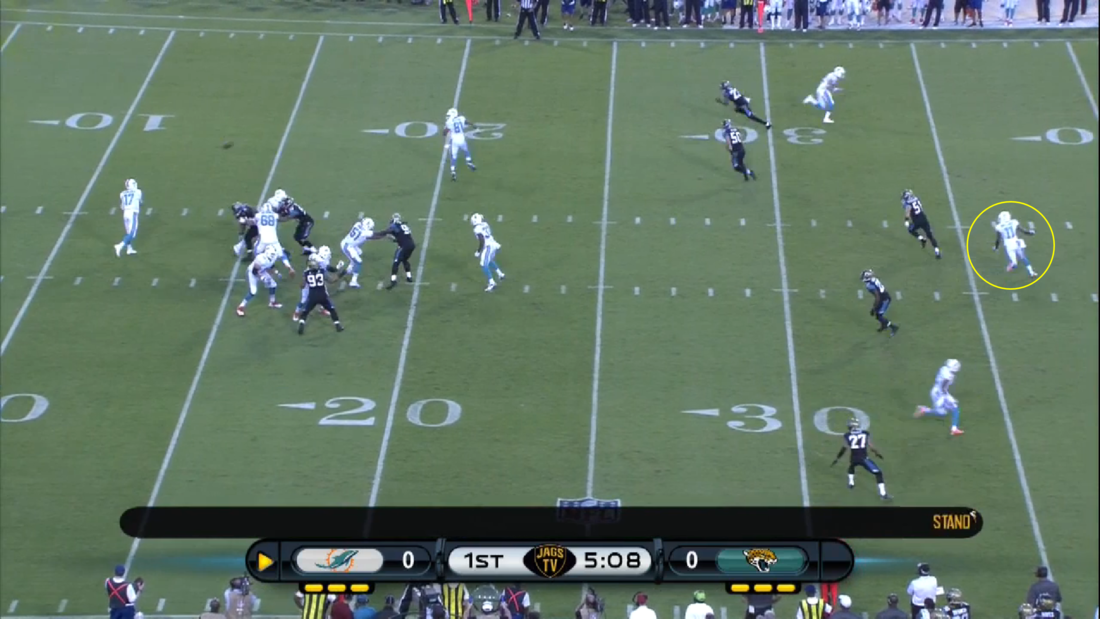 This play looks like Tannehill got rid of the ball just before his receivers came open.  Of course, looking at Richie Incognito, Tannehill may have had to get rid of the ball right then or take the sack, but if he could have held on for just another second, multiple receivers could have been open deep.  In the end, he made the completion, though Keller was tackled immediately.

The Jaguars were called for defensive holding on the play, giving Miami five yards and a first down, as well as removing the play from the stat line. 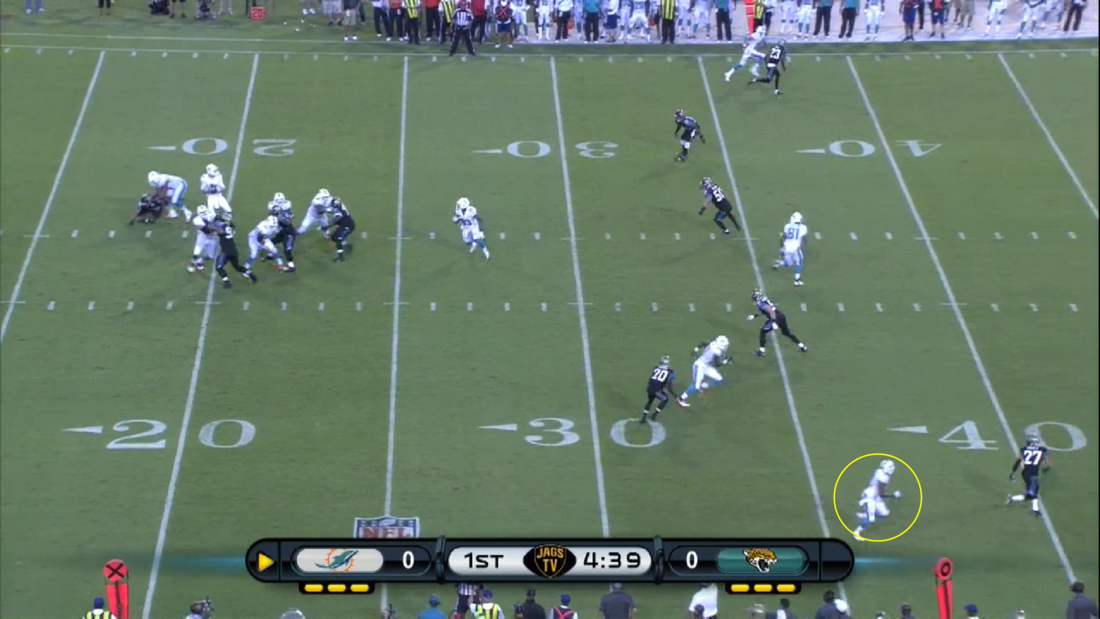 Keller was absolutely the way to go against this defense.  The tight end slides right between the linebackers, giving Tannehill a perfect target, and one he hits for a 24 yard gain. 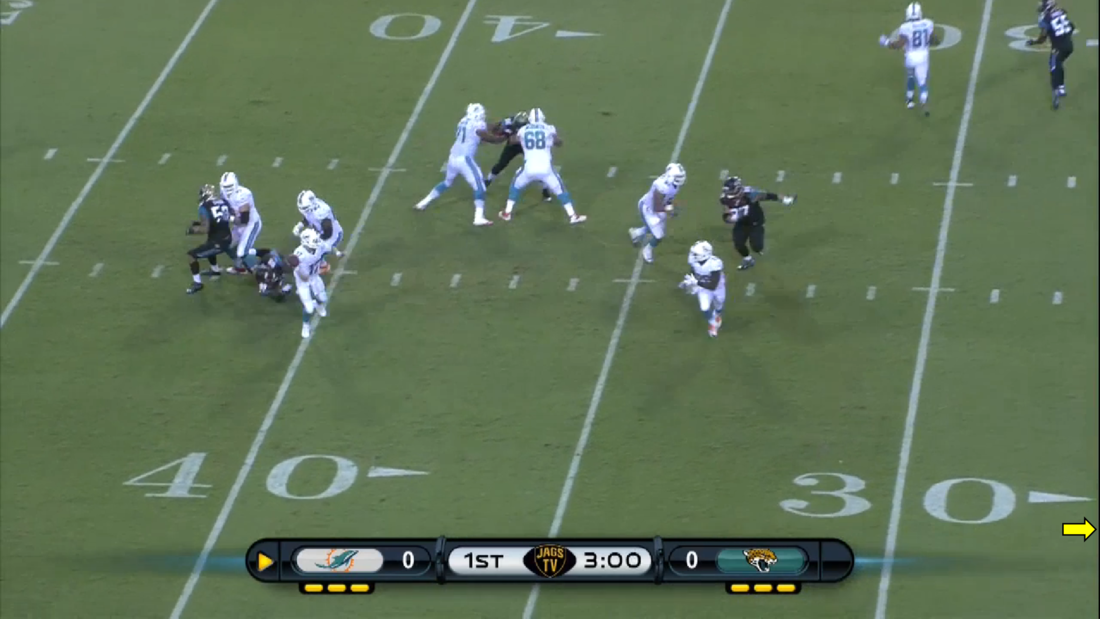 Once again, the pass rush forced Tannehill to move out of the pocket.  He sidearms a pass to Miller simply because he has to get rid of it and Miller is right there in front of him. 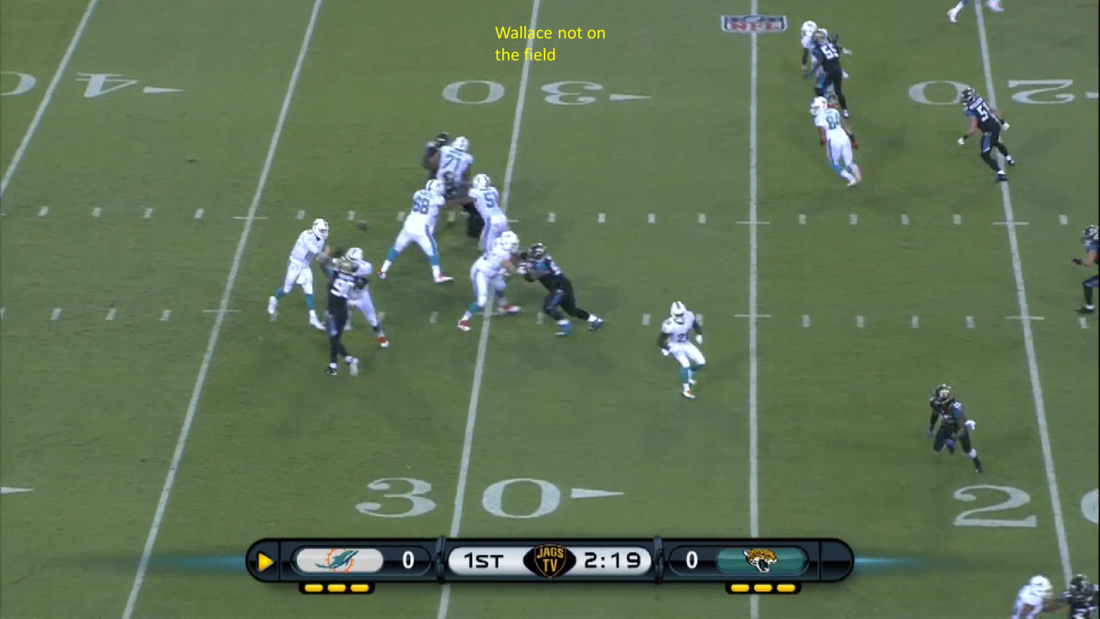 Hard to target Wallace if he is not on the field.  Of course, this is the one pass that Tannehill did target the player lined up in Wallace's spot, throwing to Tyms, but the receiver could not bring in the pass. 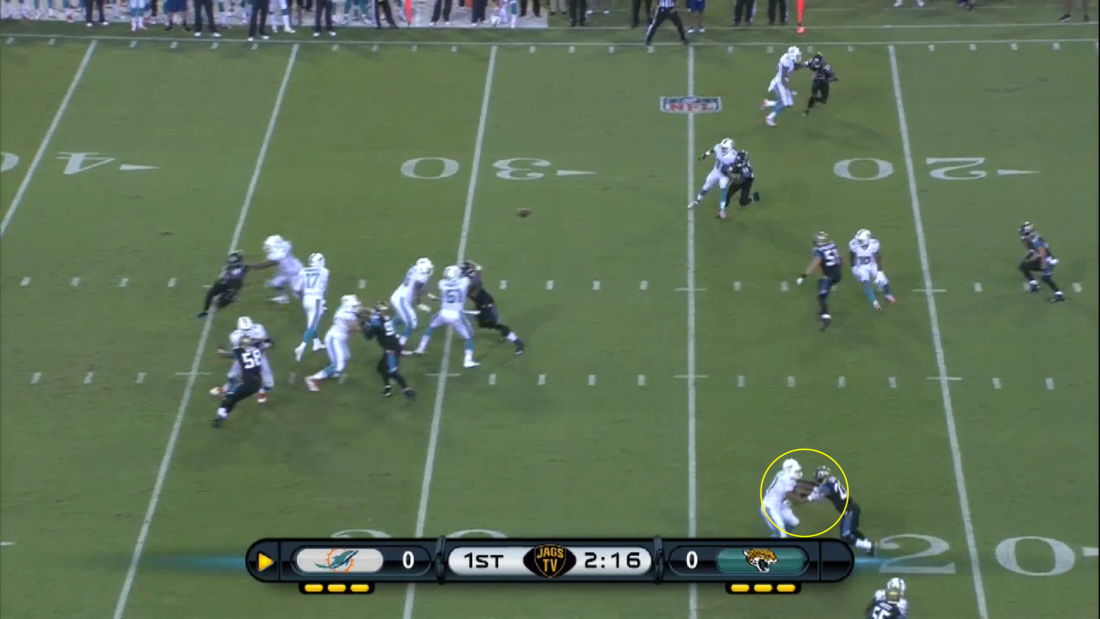 This play looks like it was a quick pass to McNutt the entire way, as Wallace and all the other receivers look like they are immediately going into blocking mode.  Unfortunately, McNutt cannot hold on to the ball.  However, he did draw the defensive pass interference penalty, giving the Dolphins a first down, and removing the play from the stat line. 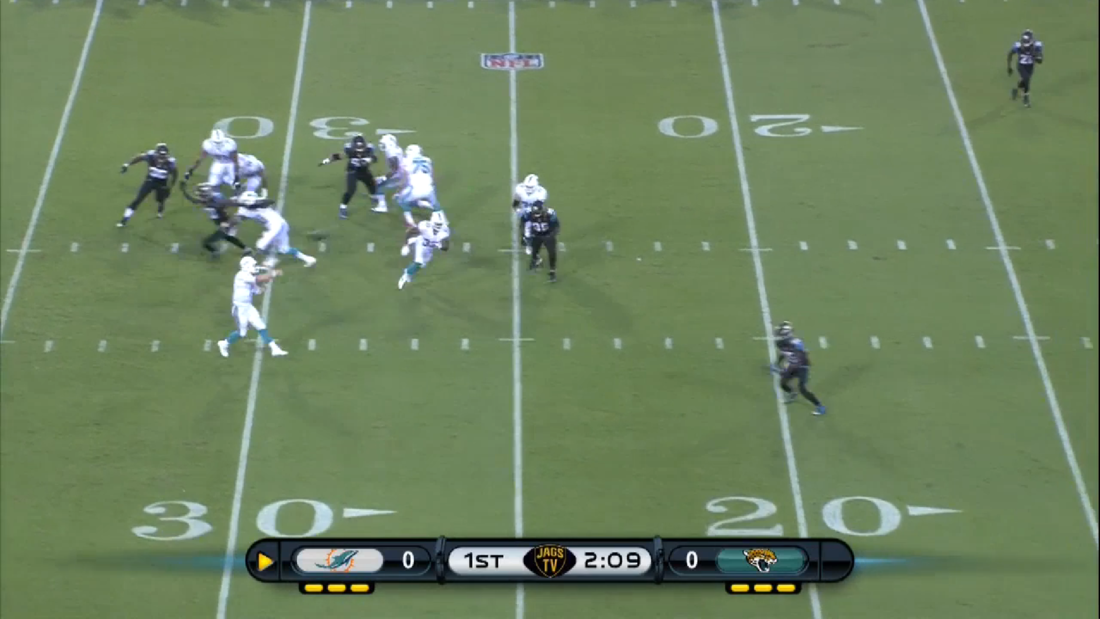 Tannehill's final pass of the game was the touchdown pass to Dustin Keller.  Tannehill dropped the ball exactly where he needed to, despite actually having both feet off the ground as he threw it.  As for Wallace, he's standing at the 12 yard line as the ball sails past him for Keller.  I'm guessing that, when Tannehill began to scramble to his right, Wallace began coming back toward his quarterback, trying to get him a target, then watched the ball go to Keller.

Officially, Tannehill finished the game 5-for-9 for 75 yards and the touchdown.  The one quarter performance earned him a 120.1 passer rating for the day.  Obviously, as fans, we all want to see Tannehill connecting with Wallace, and the huge chunk of yards we all expect that connection to bring.  But, looking at Tannehill's 13 passing plays, it does not appear there was ever a chance for the two to hook up, without Tannehill either taking a sack, or forcing a ball to Wallace simply to try to make something happen.

This was Wallace's first preseason game.  The team will get him involved at some point over the next three games.  He and Tannehill obviously need to work on their chemistry, and the preseason is an important part of that.  Would it be better if the two had at least one pass between them Friday night?  Of course.  But, it's still too early to panic.