Dolphins at Jaguars: Dolphins Stock up, Stock Down

The Miami Dolphins beat the Jacksonville Jaguars last night. As the coaches continue to evaluate the roster, let's take a look at which Dolphins players helped or hurt themselves during the game.

Share All sharing options for: Dolphins at Jaguars: Dolphins Stock up, Stock Down

The Miami Dolphins came out on top of a 27-3 final score last night, topping the Jacksonville Jaguars. The game featured the starters for most of the first quarterback, but then turned to the point of most preseason games - watching the depth of the roster. This morning, we will take a look at the stock value of players who helped or hurt themselves last night.

Stock up: Caleb Sturgis - The Dolphins' rookie kicker jumped back into the kicker battle with Dan Carpenter after his performance against the Jaguars. He recorded four touchbacks, along with scoring nine points thanks to two field goals and three extra points. He kicked a 36-yard field goal at the start of the fourth quarter, but it's the kick in the third period that put Sturgis, who had to miss training camp practices due to a groin injury, right back in the fight for a roster spot. With 7:04 remaining in the third quarter, Sturgis nailed a 58-yarder that had room to spare as it sailed over the crossbar. The rookie definitely made an argument to stay on the roster this year. Add in that yesterday was his birthday, and it was a great day for Miami's fifth round draft pick.

Stock down: Josh Samuda - The second year player is trying to claim the starting right guard position over the injured incumbent John Jerry and the injured free agent signing Lance Louis. He struggled throughout the starting offensive line's time on the field, including missing on a block leading to a sack of Ryan Tannehill. It's not enough to knock him out of the running for the position, but it left the door open for the two veterans when Samuda could have slammed it shut.

Stock up: Will Davis - At this point, Davis may be overqualified for this post. He's been on a hot streak like no one else. On Thursday, he recorded his first professional interception, picking off Jacksonville's Mike Kafka on the first play of the possession, mid way through the third quarter. He also had two passes defensed and one tackle. Every time Davis steps on the field, he somehow ends up with at least one interception. For a defense that wants turnovers this year, Davis is giving them exactly what they need.

Stock down: Matt Moore - Something looked like it was bothering Moore during the game. His passes were not as crisp and accurate as we are used to seeing from the Dolphins' backup quarterback. During practice last week, the Sun Sentinel's Omar Kelly said he thought Moore's arm looked tired. Whatever it was, Moore simply was inaccurate with his passes, and threw the lone interception for Dolphins quarterbacks when he threw a ball that looked like it was intended for Jaguars cornerback Dwayne Gratz. It's nothing that will keep Moore from making the roster or staying as the number two quarterback, but it was an off day for him.

Stock up: Tristan Okpalaugo - The rookie defensive end finished the game with three tackles, two for a loss, a sack, and a quarterback hit. In the end, Okpalaugo is playing for a practice squad position, simply based on the number of defensive linemen ahead of him on the roster, but a performance like he had on Friday could go a long way to making that happen.

Stock down: Ryan Tannehill and Mike Wallace - Part of this is because the two both played in the game, were on the field at the same time, and Wallace comes out of the game with exactly no statistics. The Dolphins have to use the opportunities they are given in the Preseason games to continue to develop the chemistry between the two. The other part of this is all about Tannehill. One of the key things Tannehill has talked about this offseason, including after the Hall of Fame Game last week, was fixing his footwork. It wasn't there during this game, as can be clearly seen in the touchdown throw to Dustin Keller: 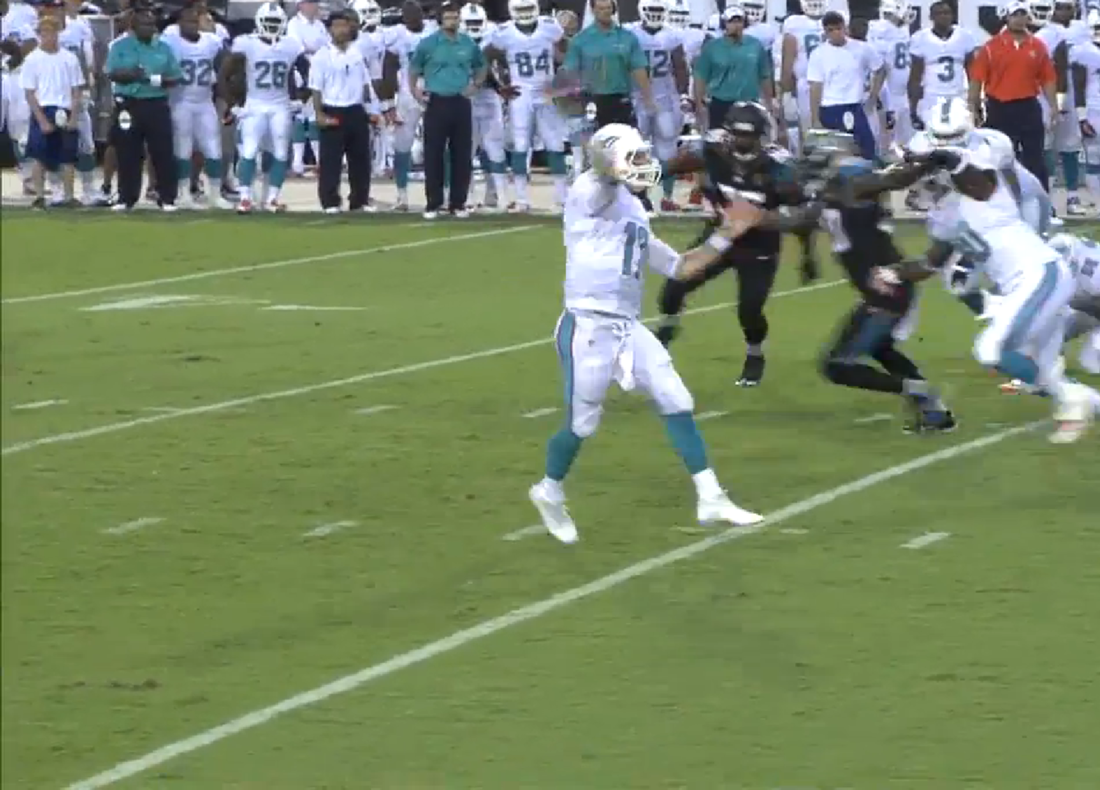 Throws like that result in passes that come up short and off target. In this case, Tannehill got lucky was Keller reacted to the ball, got down, and somehow pulled the ball in just off the turf. Tannehill has to improve his accuracy, and he needs to start that effort by working on his footwork.