Philbin: 'We don't have any starters right now' on offensive line

The Miami Dolphins conducted their sixth day of training camp today, featuring a lot of changes along the offensive line. Head coach Joe Philbin was asked about the changes after practice.

Share All sharing options for: Philbin: 'We don't have any starters right now' on offensive line

The Miami Dolphins held their fifth practice of their six day old training camp today. Along with all the reports of Ryan Tannehill throwing passes to various receivers and the kicker competition, came some interesting observations. The Dolphins have started experimenting with the offensive line.

We are looking at different combination today than we looked at the first couple of days. -Joe Philbin on the offensive line

The Dolphins clearly have not been happy with the inability of the offensive line to pick up blitzes or block pass rushers so far in training camp. While today was just practice five, they took the opportunity to try some players in new positions, working to find a chemistry that might work in protecting Tannehill.

Asked after the practice about all the changes, and if rookie Dallas Thomas could become a starter on the line, Dolphins Head Coach Joe Philbin replied, "We don't have any starters right now. We are just working different guys."

With the team practicing without pads on Friday, and right guard John Jerry sitting out practice with an undisclosed injury, working different guys is exactly what they did. Left guard Richie Incognito and reserve left tackle Thomas alternated first team snaps at left and right guard. This comes a practice after reserve center Josh Samuda worked at right guard in place of Jerry. 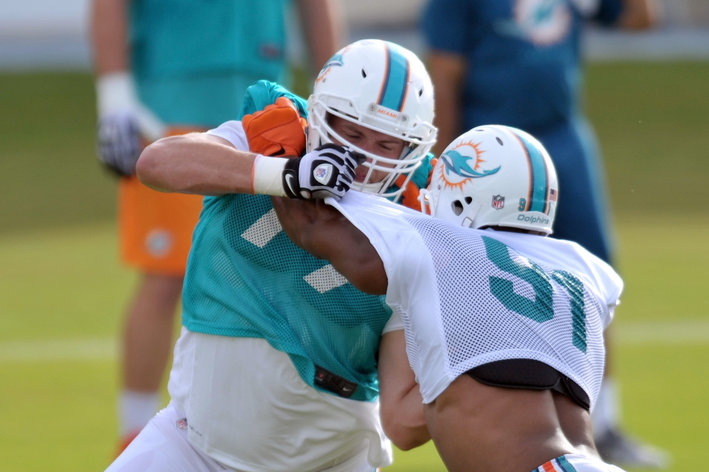 After an off day on Day 5, the Miami Dolphins' 2013 Training Camp Day 6 is complete. Here's a look at the workout through the eyes of Twitter.

"It's training camp," Philbin said of the alternating guards, "and we want to get a different look at a combination of guys at different spots. We are still in the teaching phase of the offense, so a young player like Dallas Thomas hasn't had experience throughout the whole install, so to speak. We don't want to be flipping him around quite yet. We'll look at the tape, but I thought it was good."

Clearly, the now injured Jerry, who has been working on both the first and third offensive lines, is in danger of losing his position. This is not new, however, as the team also signed Lance Louis this offseason to challenge Jerry for the starting right guard spot. Louis has yet to be cleared from an ACL tear he suffered in November.

Although he said he would not talk about injured players, Philbin was asked if Thomas would have received the first team reps if Jerry had been able to practice. "We are going to move guys around, and we are going to give guys different looks at different combinations throughout the course of camp. We are not overly concerned today who are starters are right yet."

Miami is trying to find some combination of linemen where four of the five starting positions are different than last year. The only returning starter will be center Mike Pouncey. Martin, who spent most of the season starting at right tackle, will move to the left side of the line permanently. The Dolphins signed free agent Tyson Clabo to be the right tackle this season.

We don't have any starters right now. We are just working different guys. -Joe Philbin on the status of the offensive line

"It's a work in progress as are some of the other [positions]," Philbin said of the line's status, and if it is ahead or behind some of the other position groupings. "We are looking at different combination today than we looked at the first couple of days. I think the fifth game will give us an opportunity to look at some guys in perhaps different roles, and we will have a lot of film. We will have roughly 350 offensive snaps by the end of preseason to evaluate these guys, as well, as I said, we've already had 480 out here."

If the Dolphins utilize the offensive line that seemed to get the most practice on Friday, with Clabo at right tackle, Incognito at right guard, Pouncey at center, Thomas at left guard, and Martin at right tackle, that would place a rookie and a second year player switching sides of the line, as the primary blockers for Tannehill's blindside. That could be described as concerning.

However, the team does not seem like it's done rearranging the line. "It's training camp, and we looked at who was available for practice and felt this would be a good combination to get a look at and see how guys respond," Philbin said. "It's way too early to tell [if any of the changes are permanent]."