This offseason, the Dolphins signed free agent cornerback Brent Grimes to serve as a bridge between a disappointing era of cornerback play in Miami and the development of draft picks Jamar Taylor and Will Davis. The longtime Atlanta Falcon is coming back from a season-ending Achilles injury and has just a one year deal with the team, but Grimes may provide more value to the Dolphins than most expected.

Since making the cornerback duo of Sean Smith and Vontae Davis high draft picks in 2009, the Dolphins have endured highly inconsistent play from the position. Though undeniably talented, neither Smith nor Davis ever developed into the reliable cover cornerback the team needed.

Davis was traded to Indianapolis during the preseason last year and Smith, after finishing out his rookie contract and serving as Miami's No. 1 cornerback in 2012, was not offered a competitive contract to remain with the team, ultimately signing with the Kansas City Chiefs.

For Dolphins fans, Smith's tenure was especially frustrating. He possesses rare tangibles for the position; a package of size (6-foot-3, 214 pounds), athleticism and length that will always keep him employed in the league, but he rarely managed to make game-changing plays or to lock down any competent receiver on any consistent basis.

After Smith's departure the Dolphins, just as they did four seasons prior, spent two top selections on cornerbacks in April's draft, but also insured the rookie duo by signing former Falcons starter Brent Grimes to a one-year, stop-gap contract. Grimes was Atlanta's franchise tag-recipient last year, but tore his Achilles tendon in Week 1 and was not given a substantive offer after the season and left in free agency.

Since joining the team, Grimes' play in practice has garnered praise from the Miami players and coaching staff alike. It appears that the 2010 Pro Bowl selection is penciled in to take Smith's former post at the top of the depth chart.

After undertaking the task of watching the Dolphins' new cornerback on film, it's clear that the two players, Grimes and Smith, could not be any more different from each other.

The first and most obvious dissimilarity anyone would notice is the five inches of height difference. Grimes makes up for his small stature with effort, by being a supreme athlete and most importantly, with his instincts. Play recognition and understanding of the game's subtleties is what allows Grimes to always be where he needs to be, and in turn be a consistent playmaker. He rarely finds himself out of position, nor are the receivers he covers often allowed an uncontested catch. Direct evidence of that is the 28 passes defensed that Pro Football Focus has credited Grimes with in his last two full seasons of play -- with Smith recording just 13 in the same timeframe.

Grimes' ability to read and react is much more advanced than Smith's, and when combined with his astonishing quickness the result is a much more complete cornerback.

To help explain, I'll show both players in similar scenarios. First, here's Grimes in a game against the Detroit Lions, in man coverage against receiver Calvin Johnson.

Quarterback Matthew Stafford takes a one-step drop and quickly fires to Johnson, whom Grimes has given a 5-yard cushion, running a slant pattern. Before the ball leaves Stafford's hand, Grimes has already recognized the play and begun closing the gap between himself and the receiver. 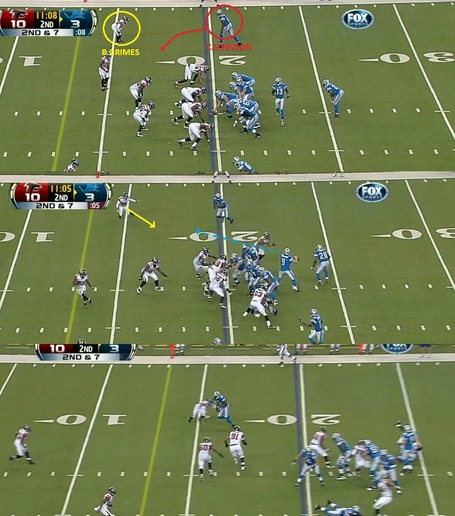 Grimes hits Johnson a split-second after the ball does and is able to force the incompletion.

Smith should have had ample time to diagnose the play and close the separation between himself and the receiver, but he allows the uncontested completion for 8 yards. 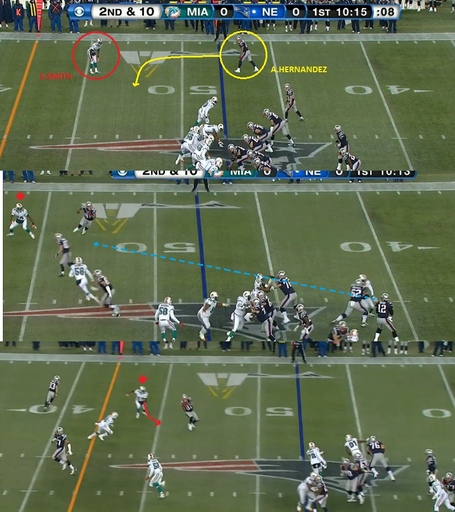 Grimes' instincts often put him in position to make the play on the ball that most cornerbacks have little chance of making, and not just Smith. More evidence is here, on a late 4th quarter play against the Tampa Bay Buccaneers.

Coming out of the two minute warning, Tampa Bay has a first down in Atlanta territory, needing a touchdown. Grimes is lined up across from receiver Mike Williams, giving nine yards of cushion just as the Falcons had been doing most of the quarter. 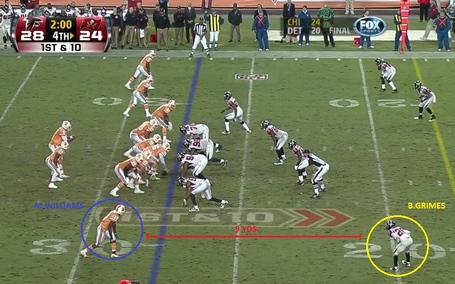 The Buccaneers and quarterback Josh Freeman had taken advantage of this coverage by using short crossing patterns and curls, advancing 50 yards on nine plays. That was again the plan on this play, with Williams running a 10-yard out pattern in front of Grimes.

As soon as the receiver begins making his break to the outside, Grimes plants his foot, jumps the route and intercepts the pass. 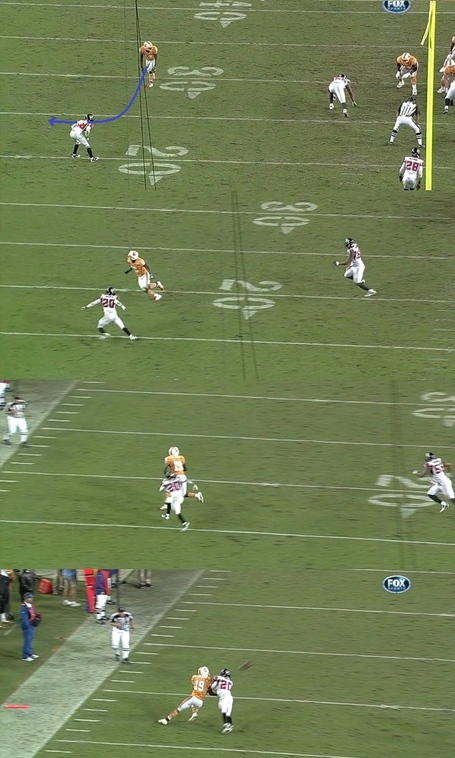 Grimes is able to make a calculated risk after figuring out what the Buccaneers were trying to do, and used his athletic ability to make a spectacular play on the ball.

Here's an angle showing Grimes already driving on the pass shortly after the ball is released: 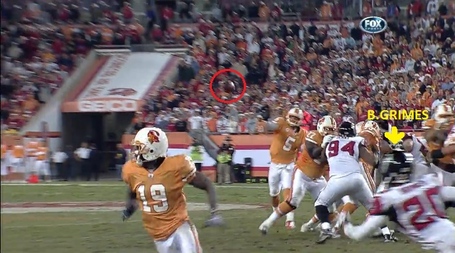 It should not go without mentioning that this interception closed out a one-score game, on the road against a winning team and against a quarterback in Freeman who had developed a reputation for engineering game-winning drives and was in the midst of a comeback attempt.

Grimes' aggressiveness, combined with a high football IQ and incredible athleticism, will give Dolphins fans the playmaking cornerback they hoped Smith or Davis would become.

"EVERY DAY BRENT GRIMES DOES SOMETHING WHERE WE'RE LIKE, 'THAT GUY IS A FREAK ATHLETICALLY'. HE HAS THE QUARTERBACKS SAYING, 'I'M NOT GOING TO THROW AT THAT GUY'" -TE Charles Clay (Sun Sentinel)

The 30-year-old Shippensburg University alum understands that great cornerback play derives from being aggressive, yet intelligent.

"That’s the key for anybody to make plays on the ball. You’ve got to go with your gut sometimes, take smart chances," Grimes told The Finsiders. "You can’t be out there just gambling just on a whim, because that’s how you look bad, but if you looked at enough film and you’ve seen, or you just played in a game awhile and they ran a few concepts a few times, maybe you could take an educated chance and make a play."

Grimes' ability to athletically keep pace with receivers while having the awareness to react to the ball will help the Dolphins defense not only be more solid in coverage than in years past, but create more takeaways in the process.

A common refrain from Joe Philbin and the coaching staff is that Miami needs to do better in turnover differential -- the addition of Grimes instantly improves the defense in that area.

"That’s all this league is about, making plays," he added.

While Grimes has precisely the ability and mentality to espouse Philbin's turnover-centric mantra while on the field, his lack of size can still be targeted by opponents. This is especially applicable in short yardage and redzone situations.

At 5-foot-10, even the best coverage technique and most adept play recognition won't always prevent a reception to a towering target, as was the case on this play against the New Orleans Saints' 6-foot-7 tight end, Jimmy Graham.

With Graham split out wide, Grimes has one-on-one man coverage with no safety help to the outside. 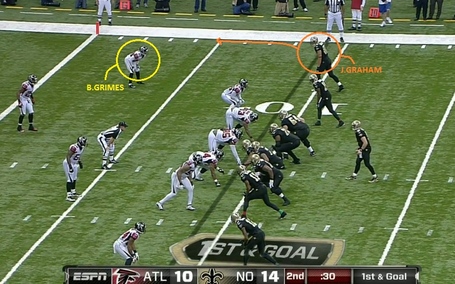 Graham simply runs to the endzone, positions himself and catches the pass at its highest point. Grimes, despite playing the route nearly flawlessly, is betrayed by his height and gives up the score. 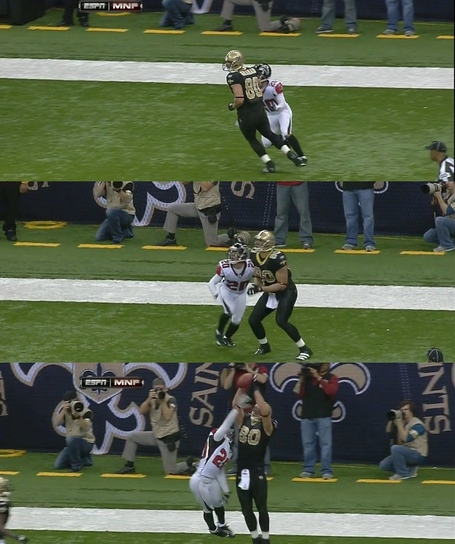 He can also be victimized by a powerful possession receiver who can take advantage of Grimes' 180-pound frame to position himself for a reception.

Here, the Baltimore Ravens' Derrick Mason, who is the same height as Grimes but has a nearly 20-pound weight advantage, catches the touchdown by using his body and strength to keep the cornerback from making a play. 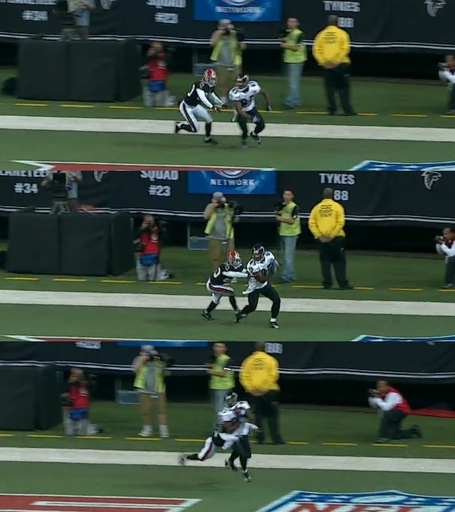 The key for the Dolphins will be to schematically prevent Grimes from being in these situations whenever possible, especially in the redzone.

The other flaw in Grimes' game, one that's afflicted the Miami secondary all too much in the past four seasons, is his mediocre catching ability. On multiple occasions during my film study, he was able to get both hands on ball but not come down with it. 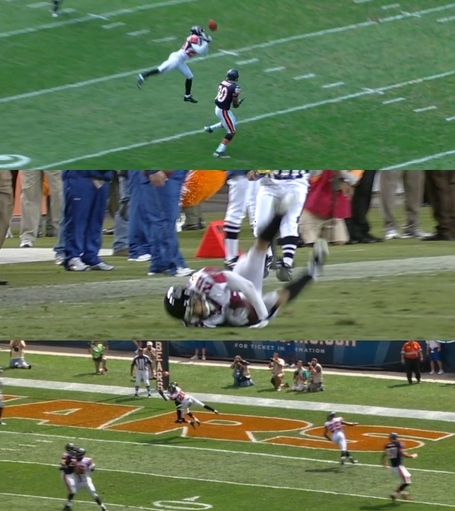 It's to his credit that he is in position so often, but ideally he'd hold on to more interceptions. His 13 interceptions in 59 career games is still more than any individual Dolphin has recorded in the past decade.

Grimes will prove to be a significant upgrade from any cornerback Miami has employed in the past several seasons, and is probably the most talented since Patrick Surtain. His high-effort, underdog persona will be an endearing quality and in sharp contrast to Sean Smith's inattentive, gliding presence on the football field.

That is, if Grimes is truly recovered from his season-ending Achilles injury. He claims to be discomfort and limitation free, and the reports of his practice performances seem to suggest no different.

Historically, players that return from major Achilles injuries usually don't regain their original form or see their careers taper off. Grimes should be encouraged, however, by the case of Demaryius Thomas, the Denver Broncos wideout who had a dominant season in 2012 after suffering a similar injury the previous year.

If healthy, Grimes has all the talent and drive to be a dominant player in the Dolphins' defense.

A big shout-out to Alex Welch of The Falcoholic, SB Nation's Atlanta Falcons blog who provided valuable background and perspective on Grimes' tenure with the Falcons.