Over the course of the offseason, we will take an in-depth look at every member of the Miami Dolphins' roster. All 90 players will be spotlighted, with the goal being to complete the look before the team's first preseason game (14 days from today). Today, we look at defensive end Dion Jordan.

We are currently making our way through the Miami Dolphins' 90-man offseason roster, breaking down last season for each player, as well as what could happen this year. Today, we continue today with a look at defensive end Dion Jordan. 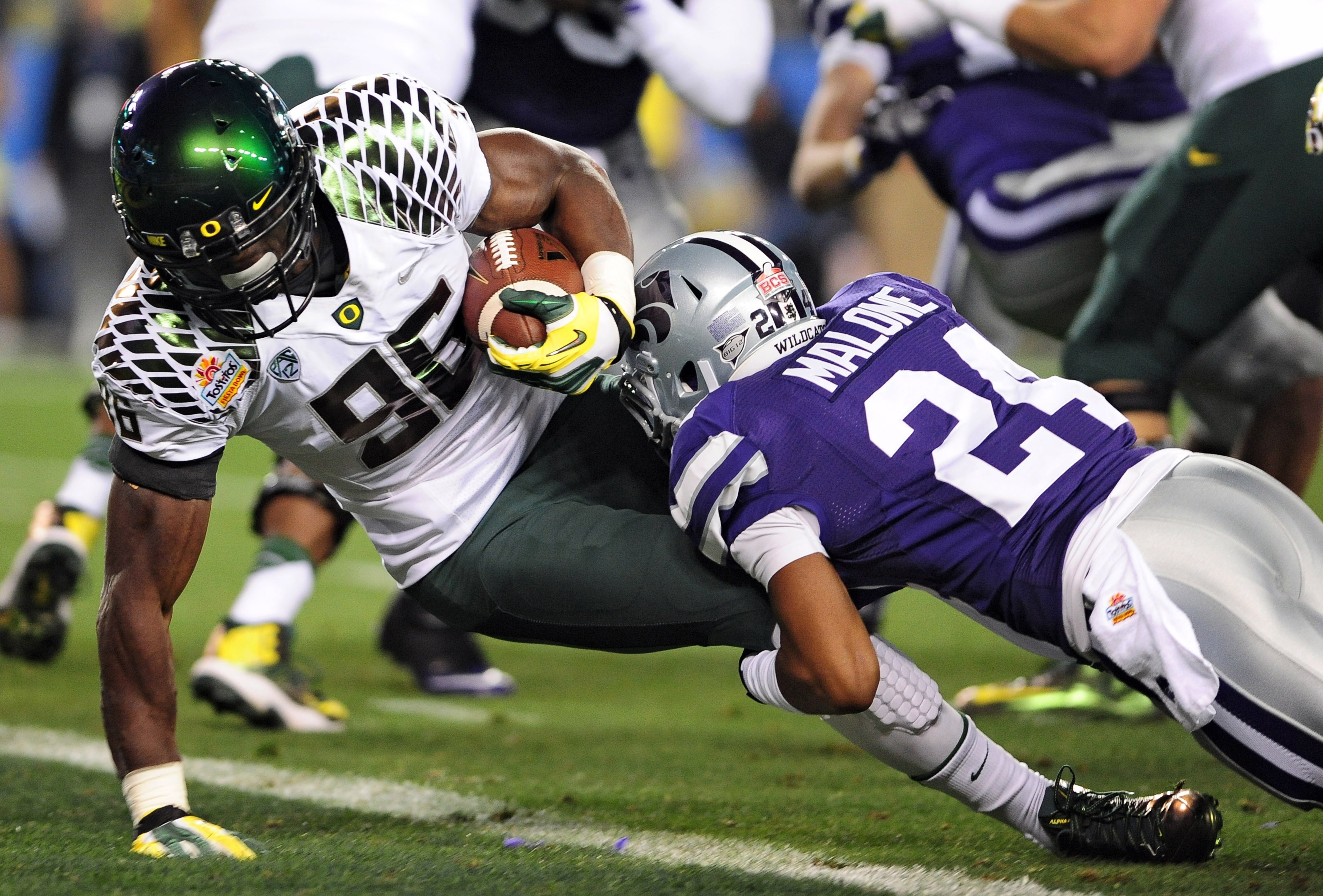 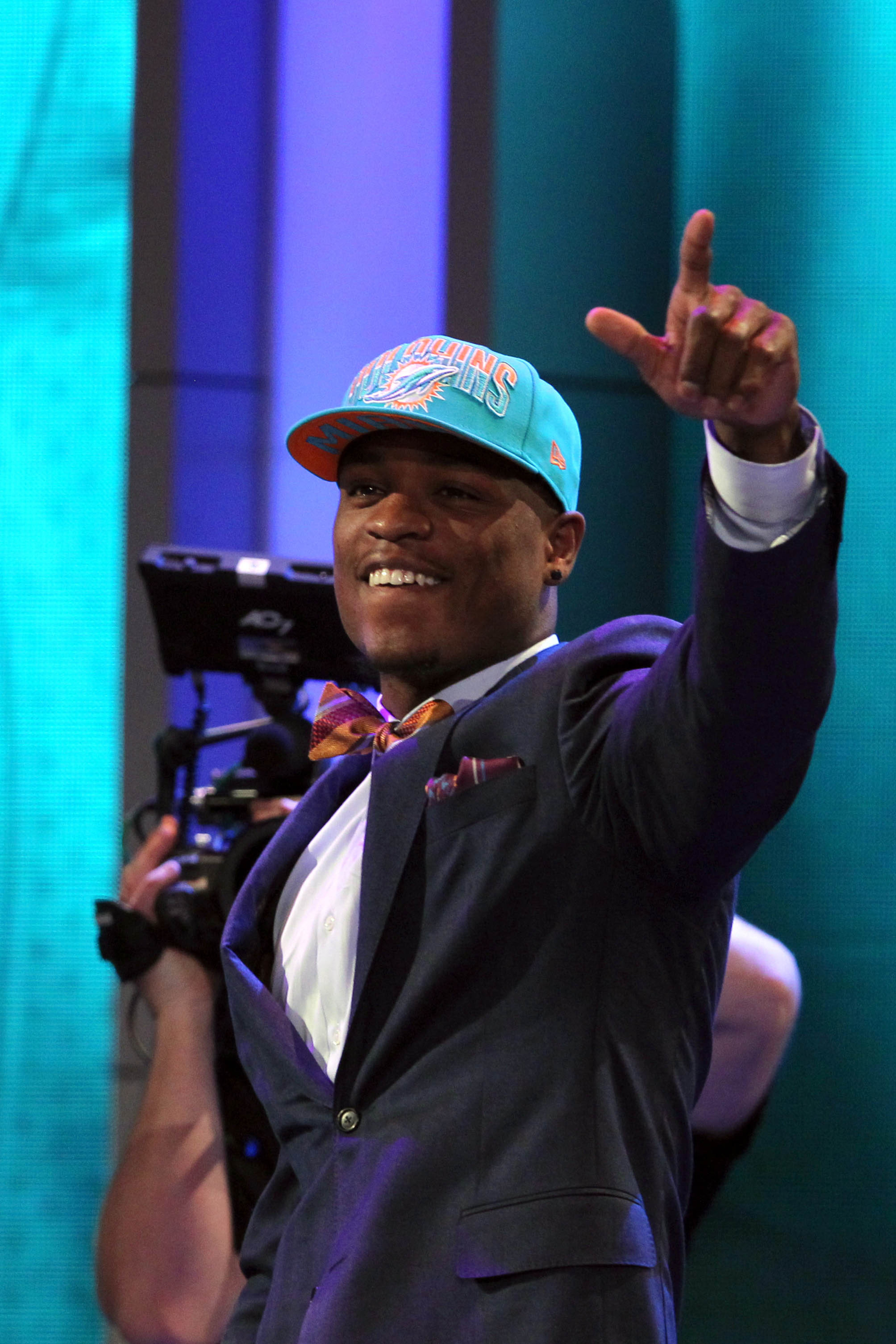 Jordan's selection with the third overall pick was the surprise of the round. Not because Jordan was selected with the pick, but because the Dolphins jumped up to grab the defensive end, when everyone expected them to select tackle Lane Johnson.

Jordan has only been playing defense for three years, having gone to Oregon as a tight end. A lot of people point to his 5.0 sacks this season as a sign that Jordan should not have been the Dolphins' pick, but that fails to actually see how the Ducks used Jordan. Throughout his 2012 campaign, Jordan lined up as a defensive end, a linebacker, a cornerback, and a running back (the picture of him carrying the ball above is from the Fiesta Bowl, where the team ran Jordan on a two-point conversion). Jordan did not get more sacks as a defensive end because the Ducks used his athleticism in coverage more than a typical defensive end would be used.

After the combine, where Jordan showed his natural athleticism (read: freak of nature), he had to have shoulder surgery that limited him during the Dolphins' rookie minicamp, and now has him placed on the Non-Football Injury list at the start of training camp.

As a rookie, Jordan will likely not be thrust into a starting role, being asked to get after quarterbacks every play. Instead, the Dolphins will pick and choose how he is used, and let him have some time to develop. He needs to add muscle to his frame, and can work with Cameron Wake on pass rushing techniques, all of which will help him in the future.

Jordan's shoulder at this point is really the only concern in terms of potentially causing a regression. While the strength and the refinement as a pass rusher could cause him to stumble, it's really just the shoulder that could be a big problem. While he has signed his contract and can now attend all team meetings throughout training camp, he won't be able to actually practice with the team until it is cleared.

Having to work to rehab the shoulder will also slow down his ability to add the strength he will need at the NFL level.

The only way Jordan is not on the active roster every game day this year is if the shoulder does not cooperate. He's expecetd to be cleared sometime after the Hall of Fame Game this year, meaning he could still see action in three or four preseason games, getting him ready for the season. Being placed on the NFI list really does not do much to his prospects for the season at this point, as the team can take him off of it at any time before the final 53-man roster cuts. If he is on it after that, however, he will have to miss the first six weeks of the season.

Realistically, Jordan should be fighting for as much playing time as he can get this year. He most likely will not start the season as the number one right defensive end, but he could end up there by the end of the year.