As part of their ongoing plan to field a more explosive offense, the Dolphins allowed tenured tight end Anthony Fasano to walk in free agency and replaced him with long-time New York Jet Dustin Keller, who signed a one-year, $4.25 million contract. While Keller is the faster player and more accomplished receiver, did Miami actually upgrade the position this offseason?

Share All sharing options for: Dustin Keller vs. Anthony Fasano: Did the Miami Dolphins Upgrade their Starting Tight End?

South Florida was the scene of the NFL's splashiest offseason, as the Miami Dolphins eagerly sought to surround blossoming franchise quarterback Ryan Tannehill with receiving weapons. It was clear that last year's supporting cast, comprised of a medley of free agent cast-offs, mid-round draft picks and leftovers from the previous coaching regime, would not be adequate as Miami attempts to build a contending team around Tannehill.

The starting tight end for that 2012 Dolphins offense was Anthony Fasano, who had been a member of the franchise since 2008. His clear strength was his blocking ability in the running game, but he never made a considerable impact as a pass-catcher during his tenure in Miami.

Fasano never totaled more than 41 receptions or seven touchdowns in those five seasons, nor did he average more than 35.2 receiving yards per game in a year. In a league where the tight end position is more and more often featured as a dangerous downfield threat, Fasano was simply a steady receiver and a consistent blocker.

The reasoning seems sound that the Dolphins should find a more prolific receiver, and signing Keller certainly fills that order.

Miami head coach Joe Philbin and offensive coordinator Mike Sherman continuously mention versatility when describing their offensive philosophy -- which requires having the personnel to create mismatches in coverage and in blocking matchups.

Keller's combination of size, speed and athletic ability from the tight end spot fits that philosophy pretty well. Miami can line him up as a tight end on the line, in the slot wide receiver spot or out wide to keep the defense off balance.

He showed this versatility often during his time in New York. On this play, the Jets split Keller out wide and the defense, in this case Miami's, responds by matching him up with a strong safety. This is a glaring advantage for the offense, and Mark Sanchez exploits it by throwing a go route and allowing Keller to beat the coverage with his wide receiver-like ball skills. 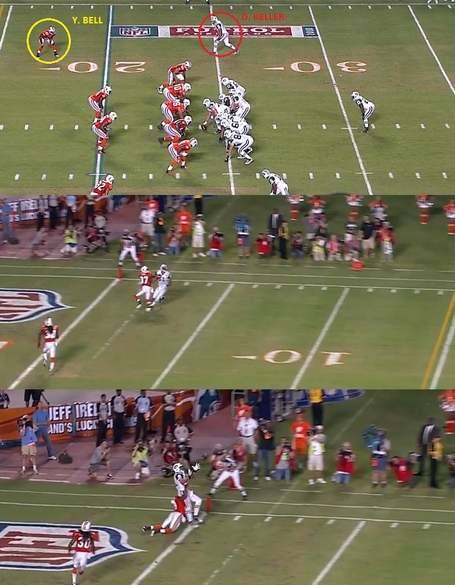 The Dolphins will be able to move Keller all around their formations, and let the defense dictate which matchup they want to target. It's the crux of Miami's offensive scheme, and Keller offers more in this regard than Fasano ever could.

Sherman occasionally used Fasano in similar ways, but his relative lack of speed and explosiveness consequently limited the damage Miami could do with him. Despite those realities, Fasano carved himself a niche in the Dolphins offense as Tannehill's outlet and a redzone target. His five touchdown receptions led the team, and his stellar hands (zero drops in 2012 on 62 targets) made him a reliable option for the young quarterback among a cast of inexperienced receivers.

He also had a penchant for making the difficult catch, some of which are shown here: 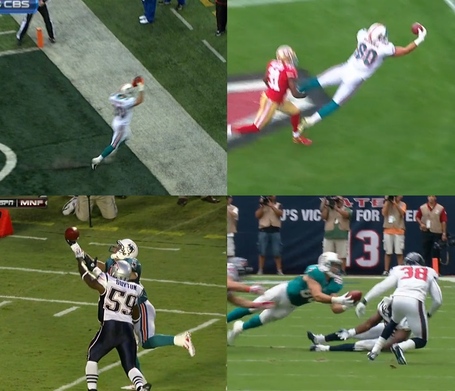 Those abilities, while not as flashy as Keller's skillset, made Fasano a very capable receiving tight end for Miami, though not an extraordinarily productive one as the Dolphins cycled through quarterbacks during his time with the team.

As was mentioned earlier, Fasano's greatest skill was his blocking and physicality when on the line. He could effectively serve as a pulling lineman, lead fullback or a sealing block at the end of the line. This is an ability that Keller does not have, or at least nowhere near Fasano's level.

On this play against the Buffalo Bills, Miami has Fasano, as they often did, lined up in the backfield. After the snap, he pulls to lead tailback Lamar Miller into the A-gap. Left guard Richie Incognito disengages defensive tackle Marcell Dareus to move to the second level. Fasano's assignment is to meet the 330-lb. Dareus head-on at the point of attack. 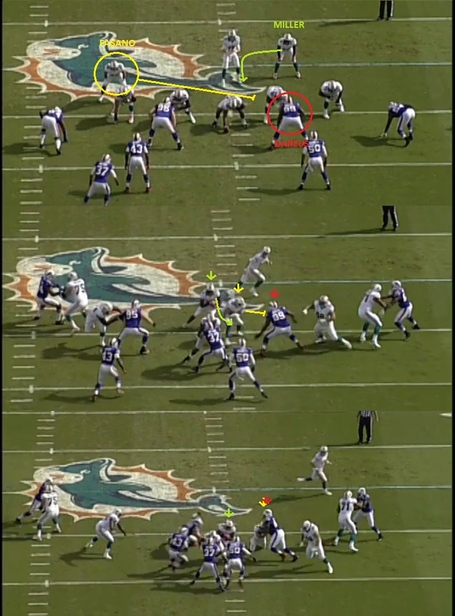 With Fasano sealing Dareus, Miller snakes through the hole. Unfortunately, Incognito fails to reach the middle linebacker and the run results in just a 4-yard gain. Regardless, this play shows that Fasano was highly capable of supporting the running game in any way he was asked.

Keller, on the other hand, completely lacks that physicality in run blocking.

Here, against the Denver Broncos, the Jets call an inside run to Keller's side. Lined up on his inside shoulder is Von Miller, one of the best linebackers in the game. At the snap, Keller stands straight up and barely lays a hand on Miller, who shoots the gap and makes the tackle in the backfield. 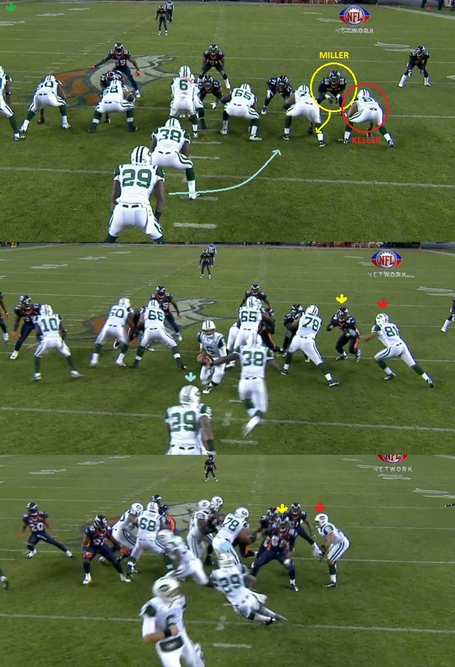 This sequence was indicative of what the former Jet consistently showed on tape. Though Miller is a difficult assignment, Keller frequently appeared reluctant to get physical with his blocking targets, and his offenses suffered when running to his side.

More often than not, when blocking, Keller entirely relied on his feet to stay in front of a defender and obstruct him as opposed to exhibiting any skill in engaging and maintaining a block. This was further exemplified in open-field blocking, something he'll likely have to do often as the Dolphins will line him up in multiple spots.

On this play, the Jets call a bubble screen to the slot receiver, Jeremy Kerley. Keller is called upon to block the man covering him, in this case Seattle Seahawks' linebacker Leroy Hill. Tebow throws the ball to Kerley, but Keller fails miserably in his attempt to open-field block Hill and the play only gains a yard. 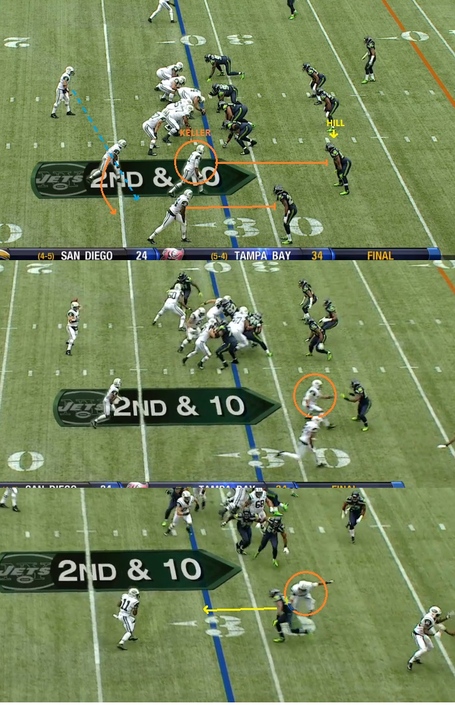 On the other side of the spectrum, here's Fasano getting into position and laying into a linebacker on a similar type of screen play, doing a much better job of creating space for the receiver to gain yardage after the catch. 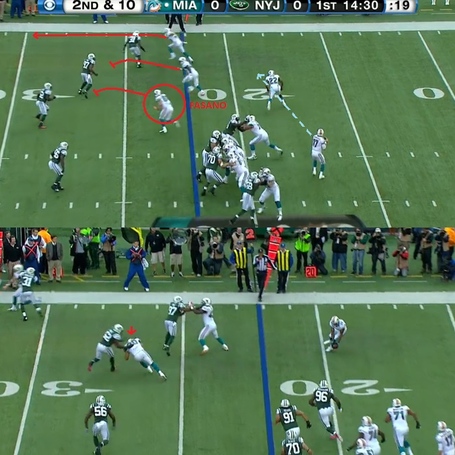 In Keller, the Dolphins have an explosive downfield target but a reluctant blocker. In Fasano, they had a steady if not exciting receiver and a dominating blocker. Of course, the difference between the two players comes down to other factors besides individual skill sets.

Fasano commanded a respectable price on the open market, signing a four-year, $16 million contract with the Kansas City Chiefs. But that $4 million average yearly salary ranks 17th in the league for the position, and is slightly less than the $4.25 million that Miami gave Keller for the 2013 season.

In 2014, however, the Dolphins will once again need to address the tight end position, as Keller's deal is for one year. They'll have the option to re-sign Keller, who has said that he hopes to use this season to springboard into a bigger contract next offseason, or search for another option either in free agency or in the draft. The alternative is to move forward with the remaining tight ends on the roster, a group that currently includes Michael Egnew, Charles Clay, Kyle Miller and rookie Dion Sims.

Of course, there's no knowing all of the circumstances or even Fasano's desire to remain in Miami, but it seems re-signing Fasano at that price would have kept a more well-rounded starting tight end for the younger prospects to develop behind, and kept another familiar target around Tannehill. Despite having two more years of NFL experience, Fasano is just five months older than Keller, and should be a strong contributor for the next few seasons for Kansas City.

Instead, the Dolphins have a likely stop-gap at the position in Keller, and will need to revisit the situation next offseason. It's this writer's opinion that not only did Miami choose the inferior option between Keller and Fasano, but they also chose less stability at the position for the near future.

What is your opinion on the Dolphins starting tight end situation? Are you more comfortable with Keller, or would you have preferred Miami re-sign Fasano at the price Kansas City paid? Or perhaps another option? Let me know in the comments, or reach me on Twitter, @seanldonovan.