Despite playing defensive tackle in college, Jared Odrick was picked in the first round of the 2010 draft by the Miami Dolphins to play end in their 3-4 defense. He was kicked out further to 4-3 defensive end when the team switched schemes last season. Now that Miami has a crop of new edge rushers on the roster, could moving Odrick back inside to the tackle position be a good option?

During his first three seasons in the league, Jared Odrick has played defensive end in both the Dolphins' 3-4 scheme of 2010-11 and in the 4-3 that was implemented last season. Though over-sized for the typical 4-3 end, his physical abilities made end the most logical fit.

After an up-and-down year, and with the Miami's recent additions to the defensive end position, moving Odrick into the tackle rotation may be the best way for the Dolphins to get contribution from him.

In fact, during Randy Starks' absence from OTAs due to a contract dispute, that's exactly where the Dolphins have been working him. Odrick himself doesn't seem to mind the position switch.

"When I got drafted here to be a 3-4 [defensive] end, it was something I had to adjust to," Odrick told FoxSports.com on Monday. "Defensive tackle is a position I've played before and I've felt comfortable playing."

Certainly, Starks will return from his holdout by the time the regular season rolls around and take his place as a key part of the Dolphins' front. But there is value to Odrick getting offseason work in the interior line.

"Position flexibility is an important part," head coach Joe Philbin said, who has mentioned that he'd use the OTA sessions to work players in different roles. "Things happen that you can't control. It might be during a practice week, it might be during the course of a game. To have players that can fill multiple roles is definitely an advantage."

In 2012, Odrick played primarily at right defensive end. With the continued development of Olivier Vernon and arrival of third overall pick Dion Jordan, it appears he'll start to lose playing time to superior edge rushers, especially on second and third downs. Having Odrick in the stable as a capable defensive tackle will add to the team's depth, and help them generate more consistent pressure.

The question is, of course, how good of a defensive tackle can Odrick be? Every position along the defensive line, which, if you don't fully understand, I highly recommend reading this Pro Football Focus piece, has its prototypical size measurements. Based on this, Odrick is naturally a 3-4 defensive end, the position he was drafted to play.

That designation has so far held true, as he looked out of place playing 6-technique defensive end last season, the first year of the Dolphins' 4-3 scheme. While more than capable of performing the run-defending duties of the position, Odrick lacked the pure speed and quick first-step to be a quality pass rushing end. After all, as a defensive end in this league, pass rushing is what it's all about.

I'm not here to dissect his abilities as a defensive end any more in-depth than that; instead I plan on examining his prospects as a defensive tackle. Though his primary position was end, Miami often kicked him inside on passing downs. This put some tackle work on tape, and should help us determine if the position is a good fit for him.

First, I'll explain (briefly, if possible) how the Dolphins' base alignment works, and the role that Odrick would be looking to serve:

Note: Miami's defense, like most around the NFL, uses multiple fronts and uses its personnel in varying ways. What I'll be referring to are the most basic concepts of the 4-3 defense that the Dolphins use.

Pictured above are the main responsibilities of the Dolphins' four defensive linemen. Probably the most important but least glamorous job is that of the 1-technique defensive tackle, usually filled by Paul Soliai, who is circled in red.

His objective is to shoot the gap between the center and the guard, force a double team and create one-on-one situations across the rest of the line and keep blockers off of the linebackers. Penetration and statistical production is generally considered a bonus. It takes a big, talented player to be good at this position, as Soliai is.

Circled in red is the right defensive end, Odrick's spot last season. He shades the tackle's outside shoulder, and usually draws a double team from the tackle and tight end on running plays.

Highlighted here in blue is Wake's position, the 9-technique defensive end. His job is fairly straightforward, rush the passer and set the edge in the running game.

Highlighted in red is the 3-technique defensive tackle, most often played by Randy Starks. This is the position that Odrick would occupy, if used at tackle. The primary objective at this spot is to disrupt. The scheme dictates that this player is isolated on a guard, giving the properly skilled tackle opportunities to make plays in the backfield.

Starks, one of the premier talents at this position, has the size (6'3", 305 lbs.) and athleticism to be a force in the run game and in the pass rush, often commanding his own double-team. Odrick has similar measurables (6'5", 302 lbs.), but isn't able to penetrate nearly as well as his counterpart.

Looking at the snaps that Odrick has put on tape as defensive tackle, it's clear that he gets handled too often by a single blocker. As an interior lineman, he can't be expected to always beat the guard blocking him one-on-one, but can't lose as often as he does.

Normally, I'd put up a few still frames to explain what I mean here. But there simply isn't anything to show, other than Odrick getting stood up, or failing to execute a pass rushing move. He does not have the strength to overpower or manipulate a blocker to disrupt the offense consistently.

His main asset, his athleticism relative to his size, does not provide him an advantage at this position either. He should be quick enough to shoot a gap and require a double team, but here's a good example of him failing to do just that.

On this play against the Seahawks, he has 1-gap responsibilities. That means he needs to split the guard and center, highlighted by the yellow arrows, and either penetrate into the backfield or draw the double team.

As you can see, Odrick, highlighted by the red arrow, does neither. 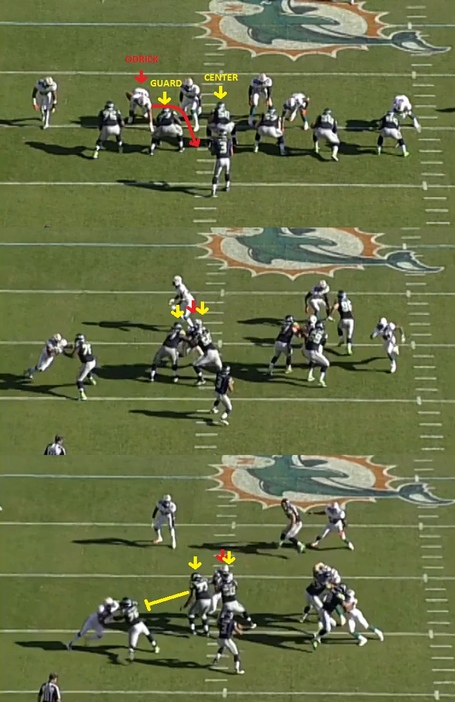 After an initial push, the center is able to block Odrick by himself, freeing the guard to help elsewhere on the line, in this case Olivier Vernon on the edge. Russell Wilson buys enough time to eventually convert this third down play.

These examples don't tell the whole story, of course, but I believe are good representative samples of what Odrick showed on tape. There were times when he shot a gap and got instant pressure, times when he collapsed the pocket by dominating his blocker and times when a drawn double-team freed up another pass rusher.

But those were much, much rarer, and what I generally watched was a player not strong enough to be an effective defensive tackle. Truth be told, I saw a player who wasn't fast enough to be an effective 4-3 defensive end, either. I believe Odrick is between these two positions: a 3-4 defensive end. He's a talented player, good in run defense and a decent pass rusher from his spots. Just out of place in Miami's scheme.

If Odrick ends up losing snaps to Vernon and Jordan, which I envision happening gradually during the season, he can provide depth at tackle. But just that. Unless he makes a ton of progress (it does happen, especially at this position), he doesn't look capable of filling the holes that Starks and Soliai will eventually leave in the near future.