A look back at the all time greatest jersey numbers in the Miami Dolphins history. The top number in team history is...

Share All sharing options for: Dolphins All Time Jersey Countdown - 1

We move on to day ten in our countdown of the top numbers in Miami Dolphins history. Today, we take a look at the top number in team history.

Do you have a question about the Miami Dolphins, the NFL, or something else the Phinsider crew can answer? Send us an email at mail.thephinsider@gmail.com or tweet us using #PhinsiderMail.

I know, you are on pins and needles trying to guess what number our top jersey could be. Will it be Bernie Kosar's #19? Maybe Yatil Green's #87? How about our buddy Heath Evans and the #44? Or Karim Abdul-Jabar's #21?

But, it wasn't always a quarterbacks number. (Now, you can point out the safety.)

The "unlucky" 13 has been incredibly lucky in Miami. It was first worn in 1970 by safety Jake Scott. While Scott's career gets overshadowed by the other 13 in team history, Scott was a dominate defensive player in his time.

As a rookie, Scott turned his seventh round draft pick status into a starting free safety and punt returner position for the Dolphins. He would play in all 14 games that season, with 13 starts, recording five interceptions and a fumble recovery. He also returned 27 punts on average 10.7 yards, with a touchdown, while his four kickoff returns average 29.3 return yards.

As a sophomore, Scott kicked his game into another gear, starting all 14 games, with 7 interceptions and two fumble recoveries. He also returned 33 punts for an NFL high 318 yards. His play earned him his first Pro Bowl berth, starting a streak that would last through the 1975 season, and Scott's Miami career.

During the 1972 Undefeated Season, Scott would move over to strong safety, starting 13 games, with one additional appearance. He would intercept five passes with two fumble recoveries. He also returned 13 punts for a 7.7 average yards. He would cap the season with not just a Super Bowl Championship, but would be named Super Bowl VII MVP.

Scott played for Miami for the final time in 1975, starting 14 games at free safety, coming away with six interceptions. However, he gave up his return duties, only returning one punt for 10 yards. He also made his final Pro Bowl.

With the NFL not counting tackles throughout his career, Scott is estimated to have around 320 tackles with the Dolphins. He is still the Dolphins' career leader in interceptions with 35. He would spend the 1976-1978 seasons with the Washington Redskins.

From 1976 until 1983, no one would wear the number 13. Then, some guy named Dan Marino took it over, and ended any chance for another number to be the team's best.

Marino was drafted in the first round of the 1983 season, ridiculously as the 27th pick that year. He would go on to set ever major passing record in NFL history by the time he hung up his cleats after the 1999 season.

As a rookie, Marino was not the team's starter when the season opened. Seven games into the campaign, however, he was given control of the team and would not give it up for 17 years. He would earn a Pro Bowl berth as a rookie, based on just 9 games worth of work, throwing for a then team record 2,210 yards (broken this past year by Ryan Tannehill), with a 58.4 completion rate and 20 touchdowns to just 6 interceptions. He was the 1983 Rookie of the Year.

The Dolphins would win the AFC Championship in the 1984 season, before losing to the San Francisco 49ers in the Super Bowl.

Marino lost most of the 1993 season with a torn Achilles' tendon, just five games into the year. He had 1,200 passing yards at the point where he went down, giving him a pace for over 3,800 passing yards.

What is the one moment in Dolphins' history you would change? 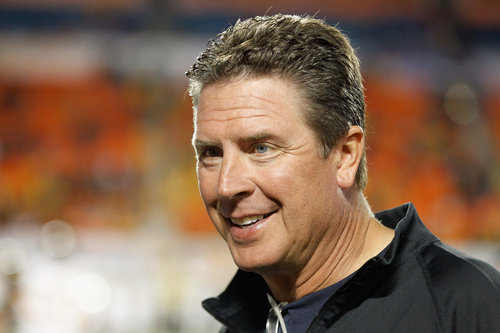 An offseason discussion giving you a chance to go back in Miami Dolphins history and change one moment. Which one would it be?

In 1994, Marino would be named the Comeback Player of the Year, earning his eighth Pro Bowl and throwing for 4,453 yards with 30 touchdowns. He would also earn a Pro Bowl trip in 1995.

Marino would continue to dominate the NFL through his final four seasons, including leading the league in completions and attempts in 1997. He was also named the Walter Payton Man of the Year in 1998.

If that's not enough to claim the top spot in our countdown, the number 13 is one of two numbers to appear twice in the Dolphins Ring of Honor, as Marino was inducted in September 2000 and Scott following in November 2010. Marino's wear of the 13 also led the number to be retired, the second number in team history to be so honored (Bob Griese's 12 was first, Larry Csonka's 39 came later).

Marino was inducted into the Pro Football Hall of Fame in 2005, his first year of eligibility.