Vonta Leach has not excluded any teams; Dolphins still favorite

A day after saying that the Miami Dolphins are the favorite to sign his client, agent Ralph Vitolo now explains that no team has been excluded.

Share All sharing options for: Vonta Leach has not excluded any teams; Dolphins still favorite

The Miami Dolphins remain in the lead to sign free agent fullback Vonta Leach, according to his agent Ralph Vitolo, but that does not mean it's a done deal. In fact, just a day after anointing Miami as the most likely place for Leach, Vitolo explained that there are still plenty of teams in the running. 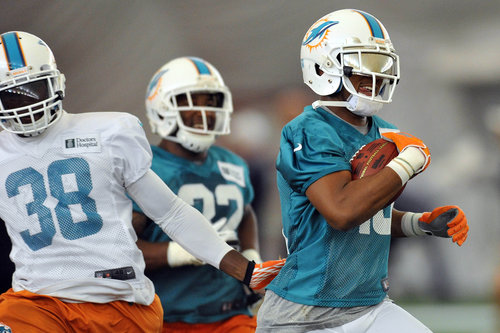 We are reaching the end of June. Here's a look at how the current Miami Dolphins depth chart projects.

"Nobody has been excluded," Vitolo told Houston's Fox26. "You have to put Miami, Houston and the Giants in the first three.

"Kansas City is also involved and Baltimore is included in this also."

Whatever the final decision, it does not seem to be coming any time soon.

"We're not playing football so the sense of urgency is not there for us to do it or the teams," Vitolo continued. "It's difficult to get anything done right now because many club officials are gone and some of them are out of the country." Leach is scheduled to run a children's camp this week, adding to the likelihood that a decision is not imminent.

Leach was released by the Baltimore Ravens earlier this month, when the two sides could not agree on a pay cut. The veteran had been scheduled to make $3 million this season, with the Ravens offering him a $2 million contract, with incentives Leach and Vitolo felt were unobtainable. Leach as been named to the Pro Bowl and was a First Team All Pro selection each of the last three years. He started his career with the Green Bay Packers from 2004 into the 2006 seasons, before joining the Houston Texans during the 2006 season through 2010. The last two years were in Baltimore.

The Dolphins had hoped that Leach would be under contract by now, but they are still waiting. The team has over $17 million in salary cap space remaining this season, the eighth highest total in the league. Despite saying no team had been excluded, Vitolo did reiterate that Miami, at least in his opinion, was the favorite.

Nobody has been excluded. You have to put Miami, Houston and the Giants in the first three. -Ralph Vitolo, Agent for fullback Vonta Leach

"To me Miami is the best fit because of their needs and their availability of cap room. I think the best overall fit is Miami, but who knows.

"He still has an interest in Houston and the Giants, the Chiefs and the Ravens. That's all predicated on can the deals be done based on the finances they have."