Yesterday, NFL Network and NFL.com reporter Jeff Darlington appeared on the Dolphins' radio show with Jesse Aggler, OJ McDuffie, and Sam Madison, to discuss the situation unfolding with the New England Patriots. Here's a look at some of the things he said.

Could the New England Patriots be falling apart before our eyes? Well, maybe that's an exaggeration, but they are definitely having a rough few weeks in Foxboro. From Rob Gronkowski's surgeries to the 8 trillionth Tim Tebow question, already, the whirlwind around the AFC East champs is different than how things have been over the past few years.

Add in the Aaron Hernandez drama unfolding right now, and things around the Bradys are very uncertain. 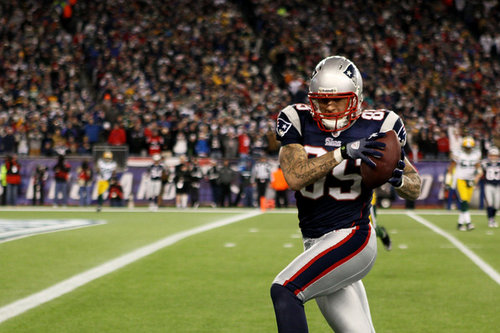 New England Patriots tight end Aaron Hernandez is being questioned in connection to the death of a man. He also had his home searched yesterday.

"Man, everything that's happened since the start of this year with the Patriots, from Tom Brady taking less money to Wes Welker leaving for the Broncos to Tim Tebow joining the team, everything feels so different about the attention that has taken on this team. Obviously, we're talking about something that transcends football, though, something that goes well beyond all that. [Hernandez and the murder investigation.]

"I think, we need to let this thing play out. I know, I hear it on Twitter, and I have thoughts in my own mind on things I have seen and heard, but, I keep telling myself, ‘Chill out. There will be plenty of time to assess this thing retroactively once we know everything that comes out.'"

Agler, who described the whole situation around Hernandez right now as "Twilight Zone kind of stuff," then suggested that, even if Hernandez is completely cleared of all possible wrong doing from a legal stance, the fact that he was in the wrong place, at the wrong time, with the wrong people, could lead to discipline from the NFL. Darlington agreed:

"No, you're right. If they conclude that he was in the wrong place, that he was involved in something he shouldn't have been involved in, they can certainly take action. Again, we've heard from a lot of anonymous sources, in terms of the reports that are out there. And, if those are corroborated, if those are publicly confirmed, on the record, as facts, or if the NFL Security Team, which is very diligent about these matters themselves, finds those facts to be true, he can absolutely be suspended for just what we have heard to this point. That he was in the wrong place, with the wrong crowd.

"I don't even want to get into the potential hypotheticals on either side, what could save him, what could hurt him. I will say, though, that you are absolutely right, that the NFL does not need a guilty plea. They do not need, really, anything. They need nothing from within the legal system to suspend this guy. I just think it's important to point out to your listeners that the legal system and the NFL discipline system are two very separate entities."

McDuffie and Madison both brought up the point that, with Wes Welker now in Denver, and Gronkowski questionable at best at this point, the possible loss of Hernandez as well could signal a step back for the Patriots' offense. Darlington explained:

"The crazy thing about the Patriots and the tight end spot is, that's part of the reason why I felt like they were willing to let Wes Welker go, it felt like Bill Belichick recognized a sort of change in his offensive philosophy, that he was going to steer away from the slot receiver and go more toward the tight end. I think, even just Gronk being hurt, and his situation being in jeopardy, caused them to take action, especially when they were trying to move forward with such an emphasis on tight end, and, in Hernandez' regard, that H-back position. So, from that end in itself, from Gronk's situation in itself, the Patriots were already trying to figure this thing out moving forward.

"They are going to have to take a look at that position and definitely evaluate. You think about Amendola and the knocks on him were his potential ability to not get injured throughout a full season; toss that in the mix as well. It's just so much up in the air, now the ultimate offsetter in all of this is, yes, indeed, the Patriots do have Tim Tebow....no, I'm just kidding....the Patriots do have Tom Brady. He's a guy who is going to make a lot of these different players a lot better. I think that always makes the Patriots a force to be reckoned with, when they have TB in the lineup. Whether Amendola can stay healthy, whether Hernandez gets suspended or not, whether Gronk is ready for the season, as long as they do have Tom Brady healthy, that's a big help. But, no, these issues cannot be ignored in terms of the potential for the Patriots season moving forward."

No matter what happens from here, the Patriots are going to have to deal with distractions and, potentially, players missing time. Meanwhile, the Dolphins will be looking to jump up the AFC East standings, taking a swing at the reigning division champions, especially if the Patriots' offense does take a step back.

It's interesting to see at least one national NFL reporter, even if he does have a background of covering the Dolphins, see a vulnerability with the Patriots.

Check out the rest of the interview on MiamiDolphins.com. You'll hear some more about the Patriots, as well as why Darlington is now a movie star, and why he asked Kevin Costner if he brought a suit from home to wear during a movie.