Continuing a re-publication of my Historical Perspective series, looking back at the history of the Miami Dolphins. Today, we go back to the 1973 season. This was originally published as a Fan Post August 15, 2009.

Reeling from the playoff loss from the previous season, the Dolphins were also trying to continue standing without some of the biggest contributors from the Super Bowl Championship years. In March 1974, prior to the previous season, Running Backs Larry Csonka and Jim Kiick and Wide Receiver Paul Warfield announced that they would defect from the NFL and join the World Football League in 1975. The three players signed the richest 3-player deal in sports history, a $3.5 million deal ($1.4 million to Csonka, $700,00 to Kiick, and $900,000 to Warfield) to play with the Memphis Southmen.

Suddenly, the bright future of the Dolphins seemed to dim.

The 1975 NFL Draft took place January 28 and 29, with Miami making the following selections:

(Bold players on Miami active roster at some point in career)

The Dolphins trades for 1975 began during the draft when Miami traded CB Henry Stuckey to the New York Giants for their fifth round pick (106 overall). The Dolphins continued to make trades immediately following the draft, giving the rights to DE Karl Lorch to the Redskins for a 10th round pick in 1976 on January 30th. The Dolphins next made a trade in May, when on the 5th they traded WR Marlin Briscoe and RB Hubert Ginn to the Los Angeles Rams for RB Donny Anderson and compensation for TE Jim McFarland.

Miami continued to make offseason moves with two July trades. The first, on July 9th, brought FB Norm Bulaich to the team in exchange for a 4th round pick in 1976. The second July move happened on the 23rd when LB Bruce Bannon was sent to San Diego for DE Pete Lazetich.

The yearly Miami trading period ended in September, as Miami traded LB Larry Ball along with a 5th round pick in 1976 to the Detroit Lion in exchange for a 1976 4th round pick on the 7th and then on the 9th sent WR Mel Baker to New Orleans for a 1976 7th rounder.

Even with the defections of Csonka, Kiick, and Warfield, the Dolphins season would prove to be successful, but playoff-less.

Week 1 on the NFL Season, September 21-22, 1975, saw Miami host the Raiders on Monday Night Football. The Raiders jumped out early on the Dolphins, and then held on during a furious second half rally, beating the home team 31-21. Quarterback Bob Griese threw 4 interceptions during the game, while RB Mercury Morris was held to only 65 yards rushing (but he did end with two of Miami's three touchdowns). The loss ended a 27-game home win streak for the Dolphins, an NFL record that still stands.

Miami returned to their winning ways in Week 2 when they visited the New England Patriots. The Dolphins left New England with a 22-14 victory behind 120 yards rushing by RB Don Nottingham..

In Week 3, the Green Bay Packers were decimated at home by the Dolphins. Mercury Morris finished the game with 125 yards rushing, while Don Nottingham finished with 102 yards rushing and 3-touchdowns. Bob Griese threw for 133 yards and a touchdown as the Dolphins won 31-7.

On October 12, Miami welcomed the Philadelphia Eagles to Miami. Looking to re-start the home dominance the team had enjoyed the previous seasons, the Dolphins once again feel behind early. However, holding the Eagles to only 9 points in the first half, Miami wound up winning 24-16.

Miami traveled to New York in Week 5 to face the rival Jets. The game, however, was never in doubt, as Jets QB Joe Namath threw six interceptions, three to DB Curtis Johnson. The Dolphins were up 26-0 at the half, and then cruised to a 43-0 win.

In Week 6, Miami visited Buffalo, recovering from an early Buffalo 13-0 lead to take the final 35-30.

November opened with the Dolphins being hosted by the Chicago Bears on November 2nd. The Dolphins dispatched the Bears with ease, winning 46-13.

At 6&1 halfway through the season, things looked to be sticking to Miami's familiar script of domination.

How did you become a Dolphins fan? 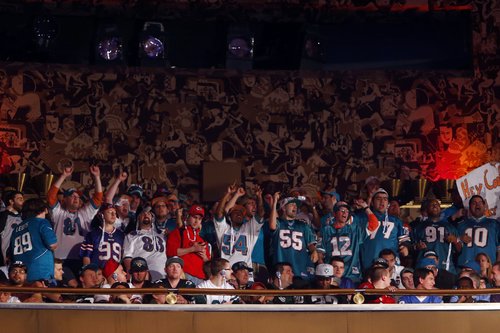 We all have stories to tell as to why we all became Miami Dolphin fans. Why not share your story?

The Dolphins welcomed the Jets in Week 8, and continued right where they left over back in Week 5. The Jets put up their only points against the Dolphins in 1975 with a 15-yard touchdown pass in the first quarter. But, once the scoring started for Miami in the second period, there was no looking back, and Miami finished the game with a 27-7 victory.

Week 9, however, would see Miami stumble. Visiting the 6&2 Houston Oilers, the Dolphins led late in the fourth quarter, only to see the Oilers score the final touchdown and hand the Dolphins a one-point loss, 20-19.

Miami returned home to face the Baltimore Colts in Week 10, only to again be disappointed. Miami got on the board first, with 4-yard touchdown pass. Baltimore's only first quarter points would come on a safety, when RB Benny Malone was tackled in the end zone by S Bruce Laird. Each team would then put up seven points in the second quarter. Baltimore quickly jumped all over the Dolphins in the third period, and extended the lead in the fourth. The Colts won the game 33-17, handing the Dolphins their third loss of the year and second in Miami.

Reeling from two straight losses, Miami hosted New England on Monday night, December 1, 1975. When Bob Griese broke his toe early in the game, QB Earl Morrall quickly led the Dolphins to a 14-0 halftime lead. The Dolphins the held on to win 20-7.

Back on a winning track, the Dolphins welcomed the Buffalo Bills in Week 12. Starting Don Strock, their third QB of the season, Miami again jumped out to the lead, posting 21 points in the first half while surrendering none. The second half saw Buffalo battle back, closing to within three before Miami opened the gap back to 10 and won, 31-21.

With two games to go, Miami was in playoff contention, looking to again win the AFC East. The Dolphins led the Baltimore Colts by one game (Miami 9&3, Baltimore 8&4) with the Bills only a couple of games back. The AFC East Division race would be decided or further muddled in Week 13, when the second place Colts hosted the division leaders.

The Week 13 match up would prove to be great. The two teams stood tough in the first half, neither allowing a single point to be scored. Miami struck first in the second half, scoring with a touchdown run from Mercury Morris. Baltimore responded with a rushing touchdown of their own in the fourth quarter. Baltimore kicked a field goal to win the game 10-7 in overtime.

With the win, Baltimore moved into a tie with Miami for the AFC East Division crown, moving ahead on tie-breakers due to sweeping the season series against the Dolphins.

With one week to play, Miami was on the outside looking in o the playoffs. Needing a win and a Baltimore loss, Miami hosted the Denver Broncos and held up their end of the playoff scenario, squeaking out a one point win, 14-13.

However, the season would end for Miami later that day, when the Colts beat the New England Patriots in Baltimore.

To add insult to injury, the Dolphins served as the host for Super Bowl X at the Orange Bowl, where the Pittsburgh Steelers defeated the Dallas Cowboys, winning their second straight Super Bowl and setting themselves up to become the Team of the Decade.

Meanwhile, the Dolphins were quickly declining, and 1976 would prove to be even more disastrous.