Share All sharing options for: Vonta Leach decision coming 'in the next two weeks'

The Miami Dolphins have spent the last week looking to upgrade the fullback position. First, they claimed former Chicago Bears fullback/tight end Evan Rodriguez off waivers last Tuesday. The next day, they welcomed free agent fullback Vonta Leach into Miami for a visit. The three time Pro Bowler left without reaching a deal, but has not ruled out signing with Miami for 2013. 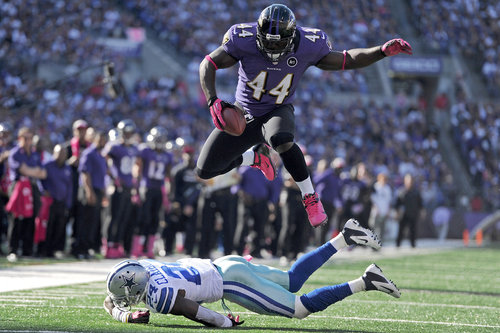 Free agent fullback Vonta Leach is considering his options before making a decision on which team to join for the 2013 season. Those options include the Miami Dolphins, with whom the former Baltimore Raven visited last Wednesday.

The Dolphins are one of several teams thought to be pursuing the former Baltimore Ravens fullback. Leach spent two years with the Ravens, including last year's Super Bowl championship team, five with the Houston Texans, one with the New Orleans Saints, and two with the Green Bay Packers. He was released by Baltimore when the two sides could not agree on a pay cut.

Leach spent last Friday with fans at the third NFL Day on the Waterfront in Washington, NC. During that time, he spoke with The Daily Reflector's Tony Castleberry, explaining, "I feel great. I know I can play in this league and I've got some teams that are courting me. In the next two weeks, I know where I'll be playing."

Leach was released a week ago today. The Dolphins immediately scheduled their visit with him, and are said to be highly interested in signing Leach. However, they are not the only team chasing Leach.

"There are a lot of teams out there that want me, about seven teams," Leach said. "Me and my agent are going to take our time and see what's the best fit for me. I'm probably going to play three more years before I hang it up."

In the next two weeks, I know where I'll be playing. -Vonta Leach

Along with Miami, the Houston Texans, Kansas City Chiefs, Denver Broncos, and New York Giants are all said to be interested in Leach. Ralph Vitolo, Leach's agent, told a Houston television station last week that Leach's top choice was to return to Houston. However, he's also said Leach really enjoyed his visit in Miami, and was impressed with the team.

Meanwhile, the Dolphins will continue to look to Jorvorskie Lane, Rodriguez, and Charles Clay at fullback while waiting to hear from Leach.