The Versatility of Olivier Vernon

Miami Dolphins rookie defensive end Olivier Vernon had a pleasantly surprising season in 2012 in a largely situational role. Considered a project coming out of the University of Miami, his development from last year into this offseason has drawn some recent praise from head coach Joe Philbin. Here I'll examine his potential, and explain why Vernon is a prospect worth keeping an eye on in 2013.

Share All sharing options for: The Versatility of Olivier Vernon

"Well you’ve seen him," Philbin told reporters on Thursday, when asked about Vernon's versatility. "He can put his hand on the ground and he can function. You can put him in a two-point stance and he can function. Then as he grows as a player you can maybe move him around to a couple different spots and that creates what we call targeting issues for the offense and identification issues."

Those 'issues' Philbin referred to are the crux of Miami's defensive philosophy: present the offense with different looks in coverage, pressure and in run defense. In his first season since joining the Dolphins as a third round draft pick, Vernon displayed the potential to be a force in all three areas, making him the prototype for what the coaching staff is looking for in a player.

"So, I like what we see from him, no question," Philbin added.

In 2012, Vernon played on just 38.8% of the Dolphins defensive snaps, according to Pro Football Focus' player participation data. In fact, he was only on the field on more than half of Miami's defensive plays in a game twice all season.

Miami primarily used Vernon in passing situations and in their nickel and dime sub-packages. His position was defensive end, but that would only be a partial description of all the roles Vernon filled during the year. The former Hurricane was, of course, asked to rush the passer and defend the run, but was also often called upon to drop back into coverage from his spot on the line.

This capability from one of their lineman gives the Dolphins a huge advantage when devising different blitz-coverage combinations, as demonstrated on this play against the New York Jets.

Here, Vernon, from his usual two-point stance, drops back into a middle zone as the ball is snapped, as all three Miami linebackers blitz the quarterback. 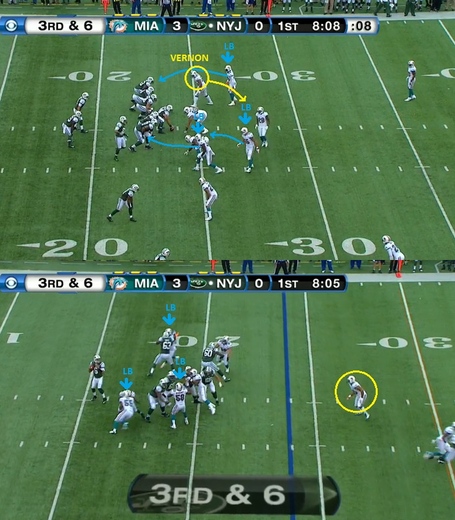 When a defense does this, the quarterback can have difficulty discerning where the pressure is coming from while a defensive lineman covers the zone left by a blitzing linebacker. This is actually a common practice in the NFL and just about every defensive lineman, no matter how big, finds himself in short coverage from time to time.

What separates Vernon is that when he's in coverage, he has all the athleticism and awareness of a full-time linebacker, meaning Miami doesn't have a liability in their zone scheme when he drops back. Most defensive lineman cannot provide that for their team.

On this play, Vernon is again lined up on the line in his usual two-point stance, but shortly after the snap, retreats to cover Jets' tight end Dustin Keller, lined up in the slot. 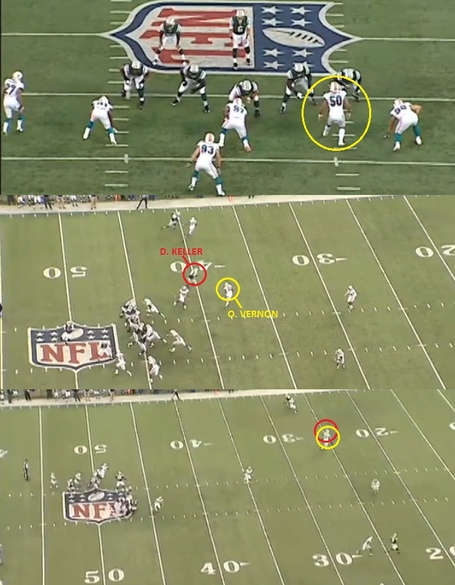 As you can see, despite starting from a pass rush position, Vernon is able to blanket Keller -- who runs a very respectable 4.5 forty-yard dash -- on a seam route all the way down the field. As Miami designs blitzes and coverages to attack an opponent, it's a huge asset to have a defensive end that can capably drop into coverage on a regular basis.

While having the capacity to handle linebacker duties is useful and fits ideally into what the Dolphins want to do on defense, the ultimate judgment of Vernon's value to the team is what he provides in the pass rush department. After all, that was his responsibility on 84% of the passing plays in which he was on the field.

It's also the area that he needs the most refining, but not in the way many anticipated he would after he was drafted.

Coming out of college, Vernon was considered a superlative athlete (which is true) and talented edge rusher, but at 6-foot-2 and 262 lbs., needed to develop his undersized frame before becoming a major contributor at defensive end. Vernon dispelled that concern in his rookie year, regularly displaying the ability to maintain his ground and even overpower NFL lineman and tight ends.

Here is an example of him bull-rushing Pro Bowl tackle D'Brickashaw Ferguson, nearly forcing him into the quarterback: 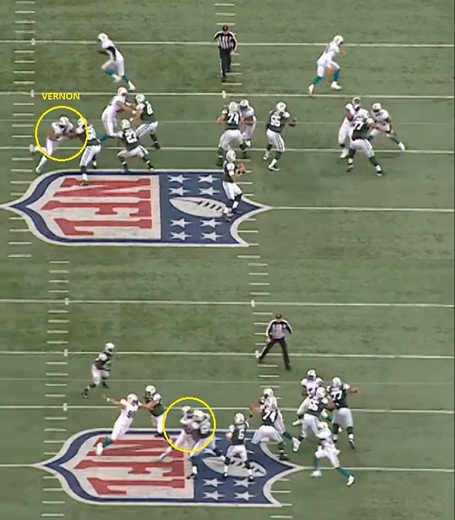 Power against bigger players proved to not be his shortcoming in Vernon's first season. Instead, it was his lack of polish in rushing the passer. He was frequently unable to take advantage of his superior athleticism to beat talented blockers.

In this writer's opinion, this was mostly due to a very-fixable lack of pass rushing moves and developed skills.

Fortunately, Vernon has one of the best available mentors in the league to help him refine his game -- Cameron Wake. And he fully intends to benefit from his All-Pro teammate's experience.

"Anything to help me get better I’m going to do," he added.

Vernon's pre-draft scouting reports proved to be accurate in that regard, with his lack of game experience (16 total college starts) leaving him needful of time to improve his pass rushing skills. In their conclusions, many of those reports pegged him as simply a good situational pass rusher but a developmental project at starting defensive end, a label I believe is incorrect.

Beyond pressuring the quarterback, the right end spot in Miami's defense is expected to handle the run and set the edge. This is the area where Vernon's lack of bulk was expected to hurt him the most. Instead, he prospered in the limited opportunities in run defense in 2012.

Here, on a play against the St. Louis Rams, Vernon is lined up in a three point stance on the strong side of the formation. After the snap, he gets engaged by blocking tight end Matthew Mulligan.

As shown, Vernon is able to stand up his blocker, diagnose the play, disengage Mulligan and move laterally down the line to stop the ballcarrier for a minimal gain. 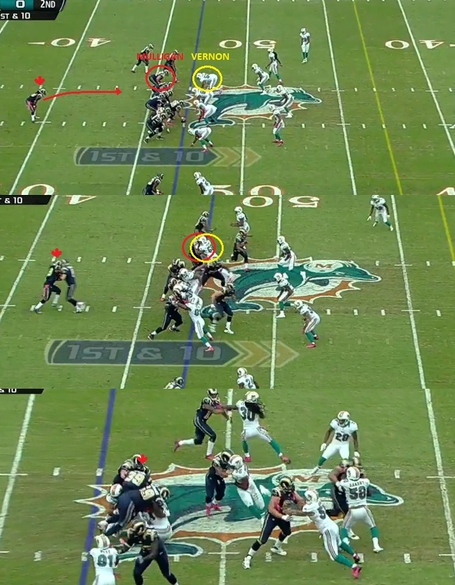 On this play, against the Tennessee Titans, the offense runs a misdirection play to Vernon's side.

He dominates the leading fullback, setting the edge and forcing the runner to make an unintended cut to the inside. Vernon's blocker actually collides with tailback Chris Johnson, and Miami's defense closes to stop any gain. 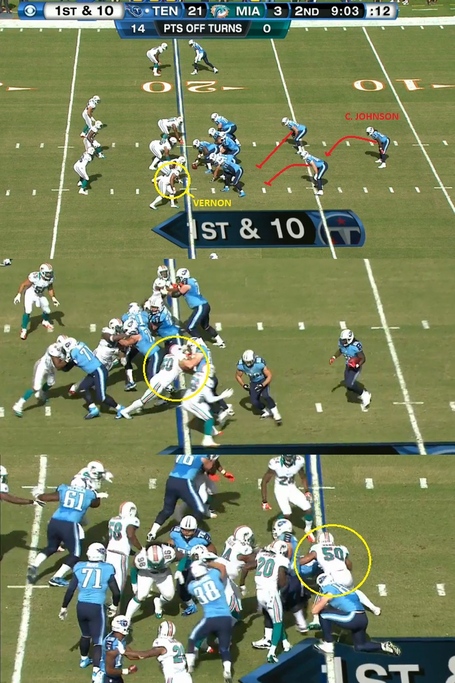 Based on what Vernon showed on tape, there is no reason to think he could not fulfill the duties of starting defensive end for the Dolphins.

The versatility that he offers is perhaps the exact vision Miami has for third overall pick Dion Jordan -- a player strong enough to play end, athletic enough to play linebacker, and a threat in the pass rush. A 'joker' role that prevents an offense from taking advantage of personnel groupings by having players fully capable of defending the run or pass, from multiple spots.

Vernon played part-time in 2012 and typically faced spread formations in his situational role. As such, it's important to temper any expectations for how he'll play when facing a heavier workload or even as the full-time starting defensive end.

But one of the most intriguing storylines for the 2013 season, in my view, is Vernon's development. He possesses a rare combination of athleticism and power and his physical abilities are nearly limitless. He's flush with potential and if developed, could be a devastating chess piece in the Dolphins' defense for years to come.