The Miami Dolphins continued their 2013 minicamp yesterday. Here's a look at some of the on-the-field action from the day.

The 2013 minicamp for the Miami Dolphins continued yesterday with the second day of practices. Minicamp is the one mandatory event during the offseason, and the Dolphins have everyone eligible to attend in camp. Currently, third overall pick, defensive end Dion Jordan, is prevented from working out with the team due to NFL rules stating he must complete his academic term at Oregon first. 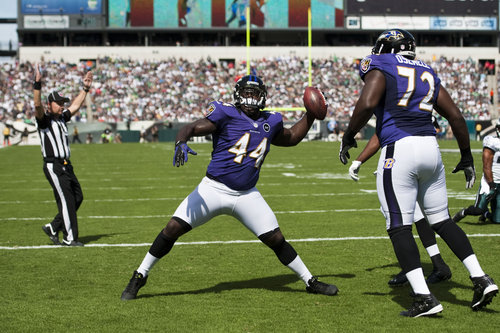 The Miami Dolphins hosted free agent fullback Vonta Leach today. Reports indicate he left Miami without a deal and returned home to North Carolina. According to his agent, the Dolphins are just one of seven teams interested in the former Baltimore Raven.

The Dolphins practice on Wednesday took focus on the fullback position. The team welcome new acquisition Evan Rodriguez, who was claimed off of waivers yesterday, but also hosted free agent Vonta Leach on a visit. Leach left Miami without a deal in place, but Leach's agent has said the three time Pro Bowler simply wants to weigh all his offers before making a decision.

Rodriguez did not do much during the practice, needing time to learn Miami's offensive system, but fullback/tight end Charles Clay saw plenty of action, and may have wish he hadn't. Clay dropped four passes, including two that should have been touchdowns, during the practice. His performance may open the door to second year player Michael Egnew at tight end, and reinforce Miami's need to upgrade the fullback position with either Rodriguez or Leach.

Interestingly, there has been little to no mention of incumbent fullback Jorvorskie Lane.

After practice, Head Coach Joe Philbin was asked about how he would evaluate the play of the fullbacks so far this year. "It's really hard in that position without pads on," he replied. "You know a lot of the jobs that you are asking a fullback to do are related to blocking, and we're not having that type of contact in this phase. I think assignment wise these guys have been good. I think they have caught the football relatively well, but again that's not an easy position to evaluate right now."

Quarterback Ryan Tannehill had a rough day, throwing three interceptions. One of them, a pass to the endzone toward Mike Wallace, simply saw cornerback Brent Grimes step in front of it and end a potential scoring drive. The other picks came on a diving play from De'Andre Presely, who stopped a two-minute drill on the first play, and a one-knee-on-the-ground pick from linebacker Koa Misi.

Sun-Sentinel beat writer Omar Kelly described the Misi interception, saying the ball was thrown so low, a receiver would have had trouble getting to it, yet somehow Misi came up with it.

The offensive stars of the day were receivers Brandon Gibson and Armon Binns. Gibson, who is trying to learn to be a slot receiver for the first time this year, has made great strides recently, and made several good catches across the middle.

Meanwhile, Binns is making a case that he, and not Gibson, should be the slot receiver for the Dolphins. He made some terrific receptions on the day, including the catch of the day on a fade to the back corner on a throw from Tannehill.

On defense, the star of minicamp so far has been Grimes. He has shown his speed in coverage of Wallace throughout both days, and he is doing a good job of staying with Miami's speedster. 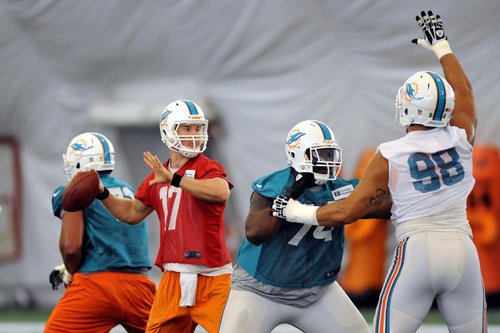 Also of note, Kelly tweeted that cornerback Richard Marshall is once again moving inside on nickel packages, something he was doing prior to a back injury landed him on injured reserve last year. Dimitri Patterson has come in to the game as the other boundary cornerback in those instances.

Tuesday marked the first workout of the offseason for Pro Bowl defensive tackle Randy Starks, who has sat out all of the voluntary activities this year in protest of receiving the franchise tag. The team held him out of most of the team drills on the first day, but worked him in with the second team yesterday. Ahead of him on the minicamp depth chart right now is Jared Odrick, who has slid over to defensive tackle from his defensive end position from last season.

When asked if Odrick would be playing defensive tackle or defensive end this season, Philbin replied, "Yes and yes."

On Tuesday, veteran kicker Dan Carpenter handled all of the kicks. Yesterday, it was rookie Caleb Sturgis' turn. Sturgis hit three field goals from 43, 47, and 50 yards, but missed two (43, 46).