The Miami Dolphins are hitting the practice field this week, holding their one mandatory offseason training event, minicamp. The practice, like one workout each day, was under the watchful eye of the Miami media, meaning we have an idea of what was going on in Davie yesterday.

I hope the fact that we are getting in the end zone a hell of a lot more than we did a year ago. -Dolphins offensive coordinator Mike Sherman on what will be different with the offense in 2013

Reports early in the day indicated defensive tackle Randy Starks had reported for minicamp, the first offseason program event he attended. Starks is unhappy with receiving the franchise tag this offseason, and is showing his displeasure by skipping all the "voluntary" events.

That means, the Dolphins have 89 of their 90 rostered players in minicamp. The only player absent is third overall pick from April's Draft, defensive end Dion Jordan. Jordan is prohibited form participating in offseason events with the team until Oregon completes their spring academic term. This week is finals week for the Ducks.

As for on the field items, wide receiver Brian Hartline had a good day, catching several passes from quarterback Ryan Tannehill, including two deep, sideline routes. Free agent addition, receiver Brandon Gibson, also looked more comfortable in practice yesterday. Gibson is being asked to work as a slot receiver, a position different than he has played previously in his career.

One receiver several people noticed on the day, continuing a trend from the OTAs, was Brian Tyms. The Florida A&M product spent most of last year on the practice squad, but has looked fluid and fast so far this year.

Tight end Dustin Keller spent most of the day on the sidelines. Asked about it after practice, Keller explained that it was precautionary, but would not say any more. Charles Clay served as the primary tight end throughout the workout, with Michael Egnew behind him.

Nothing overly noteworthy from the running backs on the day, with Lamar Miller still manning the top spot and Daniel Thomas as the second string rusher. 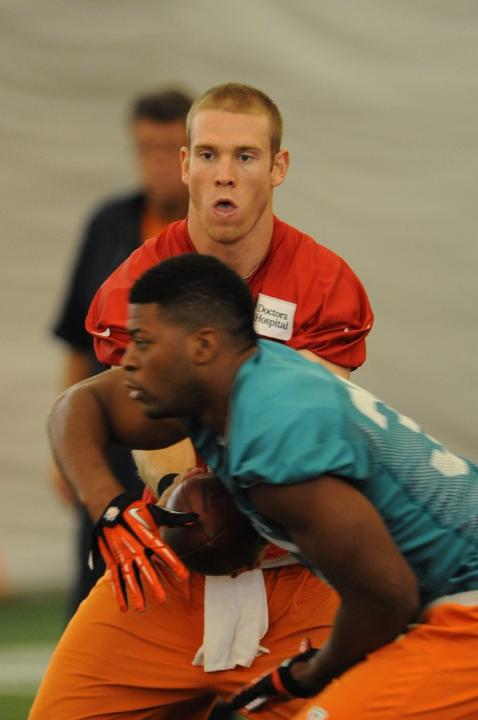 Hmmmm....I wonder what this play might be called? (Picture courtesy Miami Dolphins)

After practice, Head Coach Joe Philbin was asked about the offense's tempo and efficiency, something he routinely addressed last year. It's a little difficult to tell right now. The key in my humble opinion is the ability of the offense to get first downs and move the chains and get the defense reeling a little bit. Really push it on those seven or eight play drives where you are getting up to the line of scrimmage and calling a play and you are off and running. It is really difficult to do if you have a lot of three and out (drives). It's tough to establish that type of tempo."

Philbin also addressed Tannehill's development as a quarterback, and his comfort with the offense. "I think at the line of scrimmage we've seen a lot of pictures of him," Coach Philbin explained. "Whether it's moving a back from one side to the other, whether it's audibling from a run to a pass or a run from one side of the line of scrimmage to the other. There just have been multiple pictures of him mastering the offense, moving the pieces around to get us in a good situation or a good play."

The defense, meanwhile, did exactly what head coach Joe Philbin has been asking of it - get interceptions. Several defenders picked off passes during the workout, including safeties Reshad Jones, Chris Clemons, and Don Jones. The starting cornerbacks during the day, as throughout all of the offseason work so far, were Brent Grimes and Richard Marshall. No one else seems in position to challenge those two.

As for the defensive line, the same starting four from throughout the team's Organized Team Activities worked as the first team yesterday; defensive ends Cameron Wake and Olivier Vernon and defensive tackles Paul Soliai and Jared Odrick. Starks worked primarily on individual and positional drills throughout the day. He also worked some special teams assignments, specifically on field goal block.

As for, perhaps, the one position battle in camp this year, the day was all kicker Dan Carpenter. Fifth round draft pick Caleb Sturgis did not kick during the practice. After practice, Philbin explained, "We've been alternating on a daily basis. Obviously, we're tracking that closely. Both guys are doing a good job. Obviously, Dan's done a very, very good job around here a long time."

Punt return duties were handled by a combination of Hartline, Grimes, Gibson, and Miller. 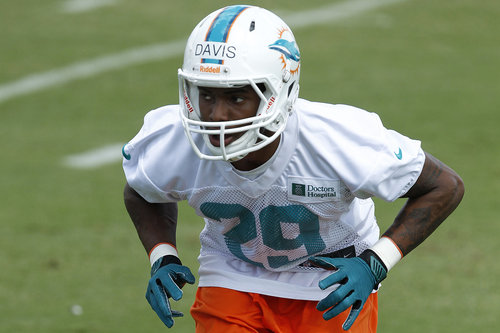 The Miami Dolphins this afternoon took another step toward signing their 2013 rookie class after coming to terms with cornerback Will Davis, their third-round selection out of Utah State.

After practice, offensive coordinator Mike Sherman was asked about what fans will notice different about the team's offense this season, as compared to last. "Well I hope the fact that we are getting in the end zone a hell of a lot more than we did a year ago. Obviously that was something that held us back from being the type of team Coach Philbin wants us to be. We need to score more points. We can't rely on the defense, so I think we need to score more points and hopefully we will find our way into the end zone."