The Miami Dolphins claimed H-back Evan Rodriguez off waivers on Tuesday. Rodriguez was the Chicago Bears' fourth round pick in the 2012 draft, but two alcohol related incidents led to the team waiving him. 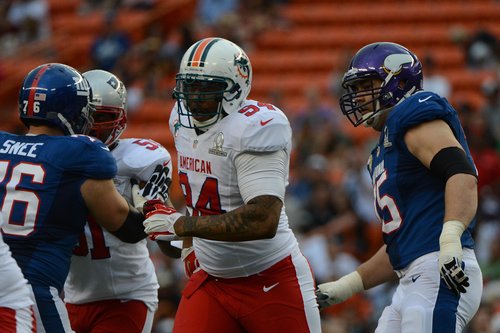 The Miami Dolphins opened their mandatory minicamp today. Pro Bowl defensive tackle Randy Starks, who has skipped all of the offseason program up until now, did report to camp today.

Rodriguez was arrested in March for resisting an officer and disorderly intoxication. The incident, which took place in Miami Beach, took place when the car in which Rodruguez was a passenger was involved in a traffic accident. According to the police officers on scene, Rodriguez initially refused to produce identification, then began yelling and police officers and refused to move to the sidewalk when requested by police.

The charges were eventually dropped.

On May 31, Rodriguez was arrested for DUI by the Illinois State Police. He was pulled over for speeding and improper lane change, before being arrested at around 3:30am.

After the latest arrest, Rodriguez issued the following statement:

"I am deeply sorry for the incident that occurred the other night. I want to apologize to the entire Bears organization, my teammates, coaches and Bears fans everywhere. I realize that I made a very poor decision. I know that more is expected of me and that I let a lot of people down that are counting on me. I will make positive changes in my life so that this doesn't happen again."

Rodriguez appeared in 12 games as a rookie, starting fiver, primarily serving as a fullback. He caught four passes for 21 yards. The Bears were expected to work him as a tight end, and a member of the passing game, this year. They waived him yesterday, 11 days after the second arrest.

The Dolphins currently have Dustin Keller, Michael Egnew, Dion Sims, and Kyle Miller as tight ends on the roster, along with Jorvorskie Lane, and Ina Liaina as fullbacks. Charles Clay has played both positions, and appears to be the team's second tight end on the depth chart right now.