The Phinsider Mailbag opens again today,answering your questions about the Miami Dolphins. Today, we take a look at the team's secondary, Lamar Miller, Ryan Tannehill, and more.

We reach into the Phinsider Mailbag today, and pull out several Twitter questions. Our questions today cover Ryan Tannehill's performance in 2013, a look at the secondary, and undrafted free agents. We also welcome Brian Naidus to assist in answering some of our questions today.

So, let's get straight to the questions, shall we?

@thephinsider do YOU believe in one LAMAR MILLER? Honestly...

Do you have a question about the Miami Dolphins, the NFL, or something else the Phinsider crew can answer? Send us an email at mail.thephinsider@gmail.com or tweet us using #PhinsiderMail.

Kevin: I do. I don't know if he is going to be a 1,000 yard back this year, but that may not be solely because of anything he does. The Dolphins want to be an explosive offense, which may mean they pass the ball a lot more than they did last season. The team may simply not give Miller the 227 carries Reggie Bush had last year.

Add in that, other than the 51 carries he had last year, this will really be Miller's first experience. He may need a little while to get going at the start of the year.

Brian: Yes, but in a limited role. I don't think Lamar Miller gets 1,500 yards this year, but I don't think he has to. I truly think Miami's offense opens up and goes aerial; similar to the Colts success last year. Miller will get ample opportunities, but will also get yards in the air. But I don't expect Miami to give him all the carries, I think we see Daniel Thomas, Marcus Thigpen, Mike Gillislee and even Ryan Tannehill get more carries than people think. Miami's entire team will benefit from being so flexible. Every position but QB and OL will be interchangeable, and it will benefit us as DC's will not know what to expect.

@thephinsider How many undrafted free agents do you see make the 53 man roster this year?

Brian: Our UDFA smells like practice squad but three guys have a chance to make the final tally. C Sam Brenner, WR Chad Bumphis, and LB Michael Clay. Brenner is the only C not named Pouney on the depth chart. He might make it for default but will have to battle with Josh Samuda, who has transferred to guard. Chad Bumphis looks to be the only pure 'slot' receiver on the team and might find a great role and even some playing time if he can impress this offseason. I like him as one of the final spots at wide receiver, battling with Rishard Mathews and Marvin McNutt. Wallace, Hartline, Gibson and Binns are safe. Michael Clay might make it just based on young talent and Miami's tendency to stockpile linebackers.

Kevin: I agree with Brian for the most part. I would add in David Hinds as having a shot at making the roster. He was brought in as a tryout, and was offered a contract. Like Brian said, Miami likes to hold on to linebackers - Hinds could be that guy. I think there are a few guys who could be stashed on the practice squad, and might see a promotion in season, as well. Guys like Jordan Kovacs and Jasper Collins could make sense in those terms.

Kevin: I'm fairly certain Brian and I will come out about the same on this one. The safety positions will be Reshad Jones and Chris Clemons, while the starting cornerbacks will likely be Brent Grimes and Richard Marshall. Jamar Taylor could challenge for a starting position, if he can heal fast enough,

Jones will be looking to back up his breakout season last year with another great season this year. Clemons is a solid safety, who is the perfect compliment to the ball-hawking, risk taking nature of Jones. Grimes will hopefully find his Pro Bowl form of two years ago, as he comes back from injury this year. And, Marshall will hopefully be fully healed from his back injury.

There's a lot of injury returns, including Taylor, so the cornerbacks may be a question mark until the season starts.

Brian: Clemons and Reshad Jones at safety. Clemons plays solid but unspectacular again in 2013 but Jones continues to excel and takes notice by end of the year as a top safety in the NFL. Backups will be Kelcie McCray and Jimmy Wilson, they decide to go with experience and Don Jones ends up on our PS. Cornerbacks see Brent Grimes and Jamar Taylor both play well when healthy. Miami still looking for solid nickel guy as Carroll, Marshall and Davis rotate in and out with mediocre success. Patterson is released to save money. 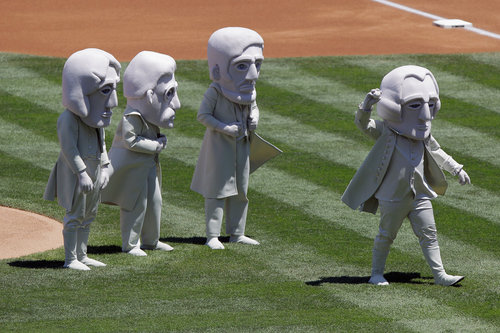 There has been a lot of talk around SB Nation and the internet of NFL teams' respective Mount Rushmore - the top four people in the team's history. Since the top four in Miami Dolphins history are already a known commodity, we will today ask, who is on Mount Rushmore 2.

Kevin: I think Jones on the practice squad is probably right. McCray and Wilson will have the inside track for the reserve safety positions - and there has been some talk of Nolan Carroll moving back there as well. Wilson will likely hold on to the nickel corner spot this year. I think the coaching staff really likes having him on the field, either as a nickel corner in a big safety set, with Jones, Clemons, and Wilson manning the back line.

Blessed (@BDasickboi3) also wanted to know what we see as quarterback Ryan Tannehill's stats at the end of the year.

Brian: Tannehill will be on the cusp of a Pro Bowl season. After this year, there will be talk of him as the second best QB in that class (behind either Luck, RGIII or Wilson). Tanne is looking at 28 TD's (4 rushing), 10 INT's and 450 rushing yards.

Kevin: I don't think that's impossible, though I am not sure ESPN will be ready to declare a Dolphins quarterback ahead of Luck and RG3. I think Tannehill probably comes out in the 3,500-3,700 yards passing, 15-20 touchdowns, 12-15 interceptions, 250-300 rushing yards. I think the team will throw the ball more this year, probably in the 550 passes range, with 325-350 completions. Those stats would give him around an 84 passer rating.

Tannehill will take the next step this year. But, it may not be a giant leap, but instead a continued progression. We'll see how it goes.

Now, it's time to get your questions in. Send us an email at mail.thephinsider@gmail.com or Tweet us @ThePhinsider and use the hashtag #PhinsiderMail.