In the 2011 NFL draft, Jeff Ireland traded up to select running back Daniel Thomas in the second round, and it's since been known as one of his biggest blunders. In two seasons, Thomas has not shown consistency in his running, and with plenty of competition in the Miami backfield it'll take more than his high draft status to keep him on the depth chart.

Share All sharing options for: What's Behind Daniel Thomas' Struggles in Miami?

There are a couple of natural knocks against Daniel Thomas and his style of running. First, he'll rarely make anyone miss in open space. Second, he's not the bruising back most expected him to be coming out of Kansas State, nor is he a particularly elusive back, making him somewhat of an undefined 'tweener in an offense that focuses on creating matchup problems for the defense.

But neither of those reasons properly explain why Thomas has only managed to average 3.5 yards per carry in his time in Miami. Nor do his tangibles; Thomas has shown he has burst getting through the hole, fluid hips for changing direction smoothly and adequate open-field speed. He is also big and strong enough to power through arm tackles.

The film proves all of this. In one particular game against the Houston Texans, which happens to be his first as an NFL player, Thomas displayed good patience and recognition of what his blockers were doing.

On this play, Chad Henne hands the ball off to Thomas, who sees no daylight up the middle. Smoothly, and keeping his shoulders parallel to the line of scrimmage, he moves laterally to the outside where tight end Anthony Fasano has sealed the Texans' outside linebacker. 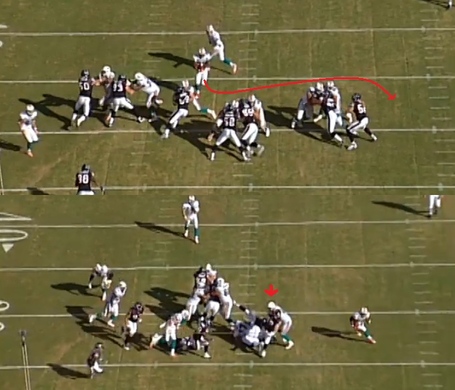 Thomas' vision and patience, as well as his quickness to change direction, resulted in a 10-yard gain for the Dolphins.

He also has proven he has exceptional burst through the hole, shown here in a game last season against the Seattle Seahawks. After receiving the ball, Thomas hesitates, locates the hole, and fires through to the third level of the defense for a 20-yard pick up. 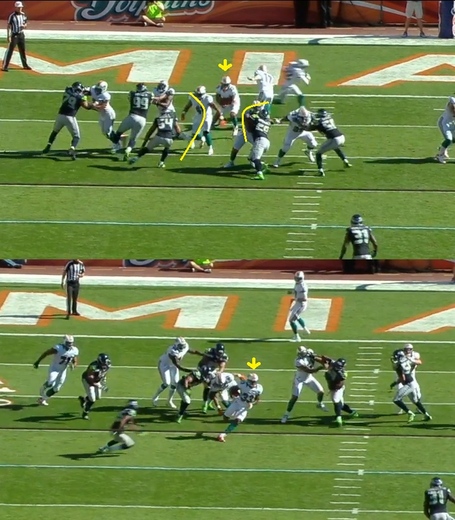 These are a couple of examples that prove that he has the ability to be a good runner. But there are many more, less flattering runs on tape that show exactly why Thomas' production has been so disappointing.

Poor vision and instincts can make even the most physically gifted runners unsuccessful. One aspect of vision and instincts is understanding where your blockers are going and anticipating where they'll be when you get to the hole. Many of Thomas' poor runs in his career are not because his blockers failed to create a hole for him, but because he did not have the recognition skills to make the play that was laid out in front of him.

One clear example was last season against the Arizona Cardinals, a game in which Thomas gained a total of four yards on four carries. One particular play in the second quarter perfectly summed up Thomas' first two seasons in the league.

After the snap, his line blocks down, sealing the linebackers and pushing the defensive lineman off the line. After right tackle Jonathon Martin (red arrow) cuts a defender who was in good position to make a tackle, a gaping hole is created for Thomas to reach the third level of the defense.

Note the defender highlighted by the yellow arrow. 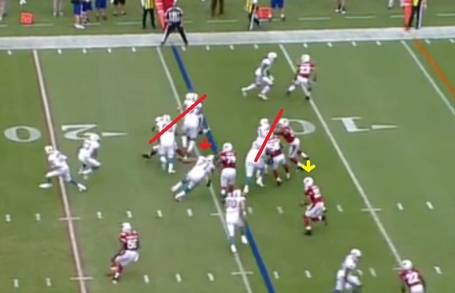 With the path created by his blockers, all Thomas needed to do was accelerate through the hole for a potential touchdown. Instead, he inexplicably cuts back inside where the strong safety, who was entirely across the formation when the ball was snapped (highlighted by the yellow arrow), makes the tackle for no gain. 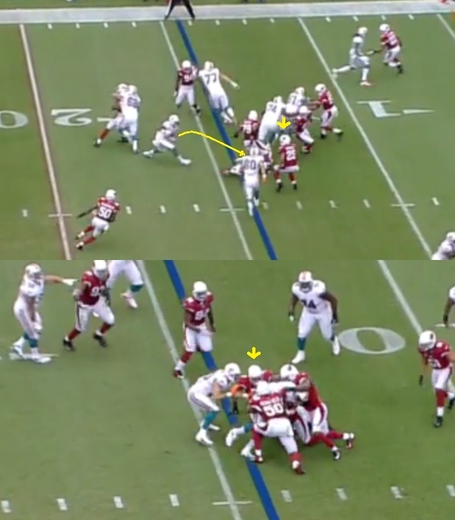 Yes, there is a Dolphins running back under that pile of red jerseys.

If the excuse on that play is that perhaps he didn't have time to get to the hole before the defense closed, there's no excuse for this example, against the New England Patriots in Week 13.

Out of a spread formation, Thomas received the inside give and headed off-tackle. The Dolphins offensive line executed their jobs masterfully; Martin kicked out the outside linebacker and left guard Richie Incognito handled the massive Vince Wilfork, while star center Mike Pouncey pulled into the hole that was created to block the linebacker. Again, a red carpet was laid out for Thomas to gain a chunk of yardage.

And again, Thomas cuts directly into the teeth of the defense. 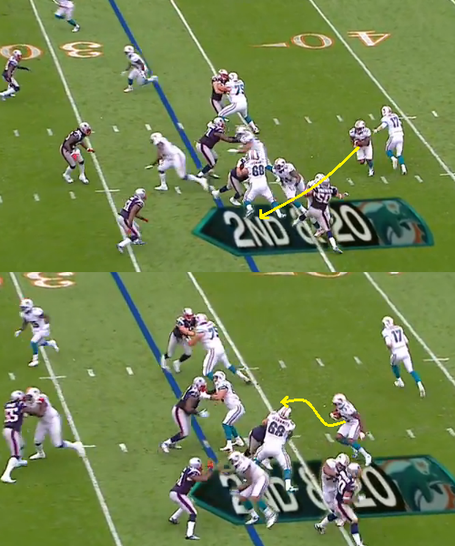 Of course, Thomas gained no yardage. And on this particular play, he also fumbled.

Based purely on his physical attributes, Thomas has all the tools to be a successful NFL running back. But he hasn't. After studying film of Thomas' runs, I've concluded that his struggles can be attributed to inconsistent, sometimes baffling field vision and instincts. It's either that, or he completely ignores his blockers to disastrous results.

The Joe Philbin regime has no ties to Thomas. They didn't draft him, so it doesn't reflect on them if Thomas is cut or is buried on the depth chart. Lamar Miller is the tailback of the future, and many believe that 2013 fifth-round selection Mike Gillislee can replace Thomas' contributions in pass protection and in the passing game. Barring an impressive showing in camp and a complete epiphany this season, the writing may already be on the wall for Thomas.