Earlier today, the Miami Dolphins and free agent offensive tackle Tyson Clabo agreed to a one year contract, adding a starting right tackle to the offensive line. The move shores up the biggest remaining hole on the roster for the Dolphins, and gives the left tackle position to second year tackle Jonathan Martin.

I was just happy when the phone rang and Mr. Ireland was on the other side. -Offensive tackle Tyson Clabo on signing with Miami

After being introduced by the Dolphins, Clabo spoke with the media. When asked about why he decided to join the Dolphins, Clabo responded, "When I was released and became a free agent, one of the first things that we wanted to find out was, who had interest. Once we found out who had interest, I sat down and I said, ‘What team do I think has use and is on the move upward in the League' and Miami was right there on the top of that list and so we decided that this was the place for us."

He continued, explaining his view that the Dolphins are headed upward, "We made some big moves in the off-season and in free agency, the draft looked like it went really well, you never know but it seems like there is some talent. The young QB with a lot of upside and I just felt like we could make some noise."

More: Dolphins to Make Playoffs in 2013?

Clabo sees his role with the Dolphins as the veteran on a young offensive line. "I do have some experience. I have been in the League for a while, but there are some really talented offensive linemen on this team already, so if they feel that my experience will help in any way, I am more than happy to do whatever I can."

Clabo, who has spent seven years in the league, and was selected to the Pro Bowl in 2010, comes to Miami from a power blocking system. The Dolphins have spent the offseason addressing the offensive line with an eye toward the zone blocking scheme they introduced last year. Can Clabo adjust to the different concepts?

"I think that I am going to fit in pretty well," he explained. "When I first came into the League I was with the Broncos on the practice squad and that's (zone-blocking) all they did and then when I came to Atlanta, Alex Gibbs and Tom Cable were the line coaches, so I know the zone-scheme and I feel like that I should be able to hold my own." 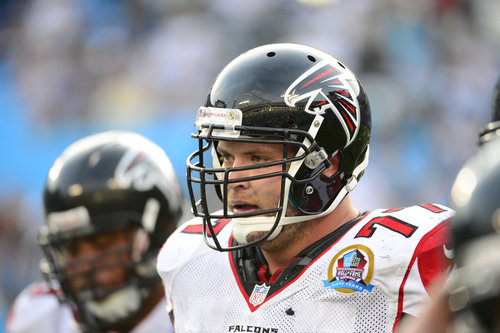 According to reports, the Miami Dolphins have ended their search for a starting tackle by adding Tyson Clabo to the roster. The deal will be a one year contract.

The Dolphins have been looking for an offensive tackle all offseason. For much of that time, it appeared the team would sign free agent Eric Winston following his release from the Kansas City Chiefs. Then, a possible trade with the Chiefs for their franchise tagged left tackle, Branden Albert , materialized only to never progress very far.

Miami traded up in the first round of the NFL Draft last month, in a move everyone expected to lead to a selection of tackle Lane Johnson. Instead, Miami snagged defensive end Dion Jordan, and, at the end of the draft, began exploring free agent tackles again.

When did the Dolphins first approach Clabo? After the draft. "Miami didn't come into play until later in the process, after the draft. Some teams showed interest before the draft and then of course the draft happened and everybody changed their mind. So I was just happy when the phone rang and Mr. Ireland was on the other side."

The Dolphins open the regular season this year at the Cleveland Browns. Two weeks later, they host the Atlanta Falcons in Miami's home opener. About meeting his former team in the first game at Sun Life Stadium this season, Clabo responded, "I am always looking forward to home openers. So it will be exciting, it will be good to see some of my friends and (former) teammates before the game and then after that we are going to try to put it to them."

Hopefully Clabo, and the Dolphins, can put it to a lot of teams this year.