This offseason, fifth-year linebacker Philip Wheeler signed a five-year, $26 million deal that completed a journey from forgettable backup in Indianapolis to highly-paid starter in Miami. After one season in Oakland in which he earned just $700,000, what did the Dolphins see in Wheeler to make them think he'd be a long term solution at linebacker?

Philip Wheeler was drafted in the third round of the 2008 Draft by the Indianapolis Colts. For his first three seasons, Wheeler mostly played special teams, before getting an opportunity to start in 2011 after long-time stalwart Gary Brackett went down with a shoulder injury.

He turned in a solid season at outside linebacker, but had a limited role. Wheeler came off the field when Indianapolis brought on their nickel and dime packages, which usually happens to the linebacker weakest in coverage and that offers little in terms of pass rushing abilities.

This would usually be indicative of a player who possessed limited athleticism and doesn't offer the versatility that's expected of an every-down linebacker in the NFL. As such, Wheeler was greeted by a tepid market when he became a free agent in 2012.

Despite getting a similar level of interest from Miami, which had three established starters at linebacker, Wheeler made the decision to sign a one-year deal with Oakland. The Raiders gave him the best opportunity to start, which was a chance to show his full capabilities and reap a more lucrative contract down the road.

By all accounts, Wheeler had a great season in 2012, racking up 105 tackles, two forced fumbles and three sacks for an otherwise abysmal Oakland defense. After proving he had the ability, Wheeler re-entered the free agent market in 2013 as a viable three-down linebacker, before ultimately signing Miami.

The one-year deal ended up being a smart gamble for Wheeler, but was it a smart for the Dolphins to bet that much money that he could sustain as a productive starter in this league?

Here's an in-depth look at what Wheeler brings to the table.

His strengths and weaknesses are all evident on tape, going back to his days in Indianapolis. The Colts used Wheeler as a weakside linebacker in their 4-3, and being that he was primarily an early-down player, his main responsibility was pursuit in the running game.

Wheeler possesses the speed and agility to navigate through a muddled group of defenders and offensive players to get to the ballcarrier effectively, but as I'll show, he struggled when blockers got their hands on him.

This is a play from the Colts' loss to the Atlanta Falcons in Week 9 of that year. Here, on first down, Atlanta will run it straight up the gut. Because of the way Indianapolis aligns its defensive lineman, tremendous pressure is put on the linebackers on these inside runs.

Wheeler is about to be engaged by Falcons' tight end Tony Gonzalez as Turner receives the hand off. 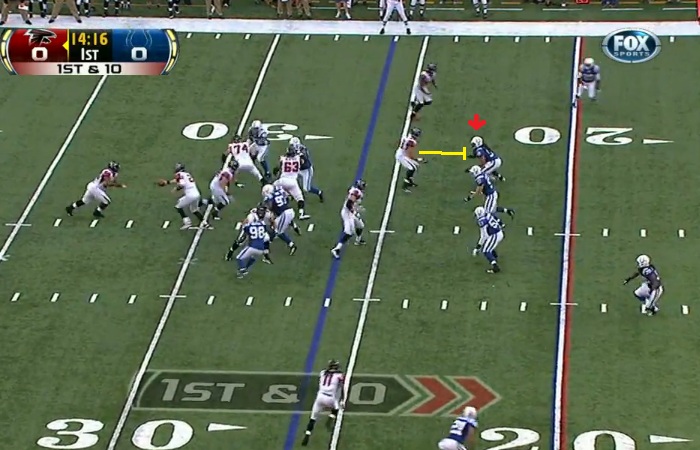 Wheeler, in an attempt to make the play and being aware of his shortcomings, used his agility to get around Gonzalez. The tight end had little trouble funneling him out of the way and Turner picked up a big gain. 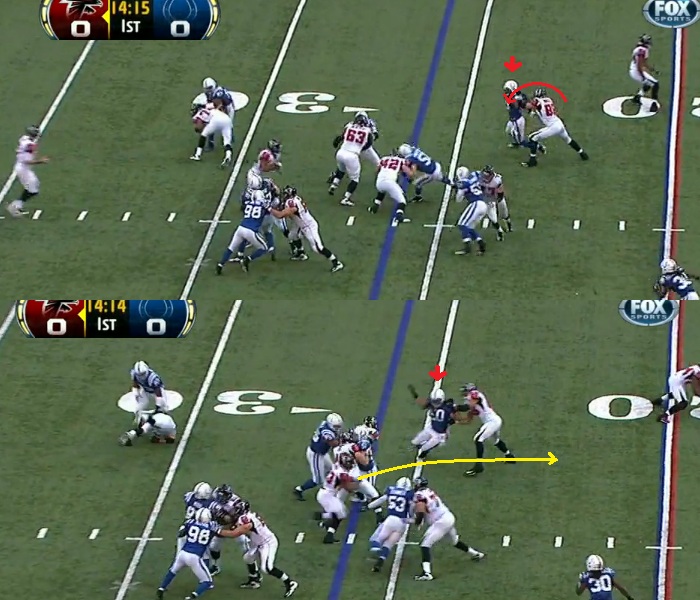 Simply put: Wheeler gets in serious trouble when a blocker reaches him at the second level. This continued to be evident after he joined the Raiders. Oakland, however, got much more production out of him.

Here's the reason why: 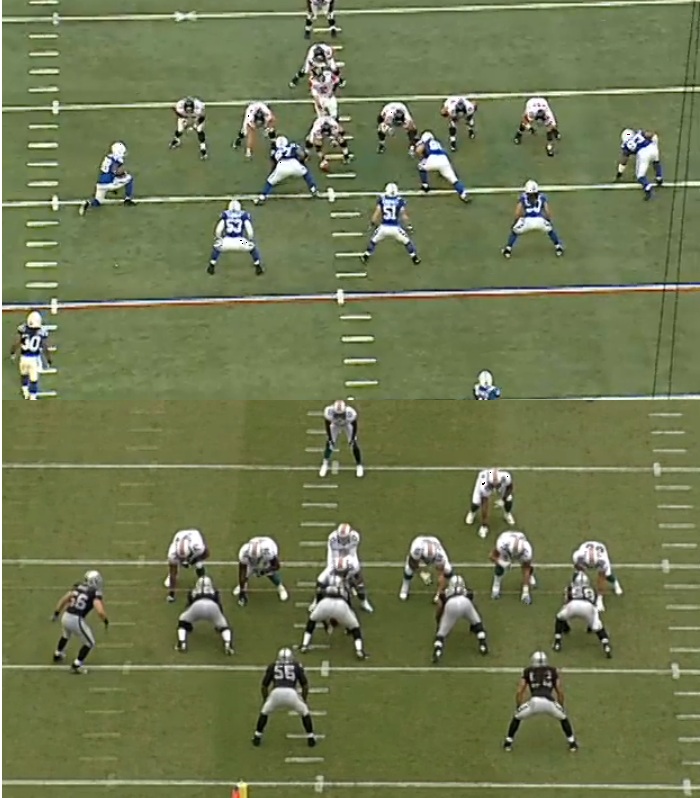 The first formation is the Colts' 4-3 scheme from 2011. As I previously mentioned, their defensive line alignment left them susceptible to inside runs. The two defensive ends are in what's called a '9-technique', where they line up far outside the last player on the offensive line, making them non-factors on these plays and freeing up blockers to move to the second level of the defense.

The second formation is the Raiders' 4-3 from a year ago. As you can see, they use much shorter splits between defensive lineman. Both defensive ends are inside the offensive tackle's shoulders. When the offense wants to run the ball, all four lineman must be taken into account.

The side effect is that the linebackers need to worry less about seeing blockers reach them and can focus on diagnosing and reacting to the play. This also gives a player like Wheeler, who thrives in open space, free reign to pursue the ball carrier.

Wheeler saw his tackles increase from 74 to 105 under the Raiders' scheme, which in this sense is very similar to the 4-3 that the Dolphins use. Miami relies on its front four, especially defensive tackles Randy Starks and Paul Soliai, to occupy blockers and allow the linebackers to operate in space.

As I mentioned, defending the pass wasn't something that the Colts often expected Wheeler to do. He was taken out of the game in obvious passing situations, and played sparingly against pass-oriented offenses.

That changed dramatically when he arrived in Oakland. Usually drawing the assignment of the tight end, Wheeler often struggled in man coverage against even mediocre talent (relative to what he'll face on Miami's 2013 schedule). Despite having the requisite speed and athleticism to keep up with the average NFL tight end, he lacks the raw coverage skills to be effective.

The numbers reflect this.

What those numbers don't tell you, and the tape does, is that Wheeler is very effective in zone coverage. The reason for this is the same reason why he's an effective run defender: his ability to make his moves while keeping his eyes in the backfield. He also reacts quickly to what he sees and moves well in the open field.

As an example of his reaction time in zone coverage, I'll show a play from Oakland's Week 8 victory over the Kansas City Chiefs. It's 2nd & 20, and the Raiders are in a deep zone coverage. Hoping to pick up some easy yards, the Chiefs run a short in-pattern with running back Peyton Hillis. Wheeler is highlighted with the red arrow. 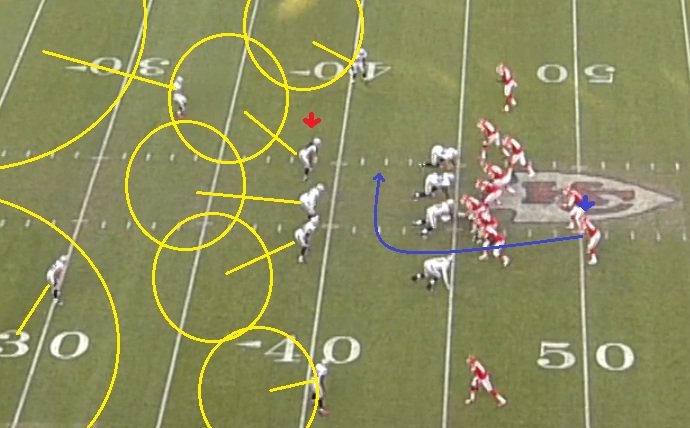 Wheeler, with his eyes on the quarterback the whole time, recognizes and reacts to the pass before the ball is even released. Pictured is Wheeler (red arrow) making his break while the quarterback (blue arrow) is midway through his throwing motion. 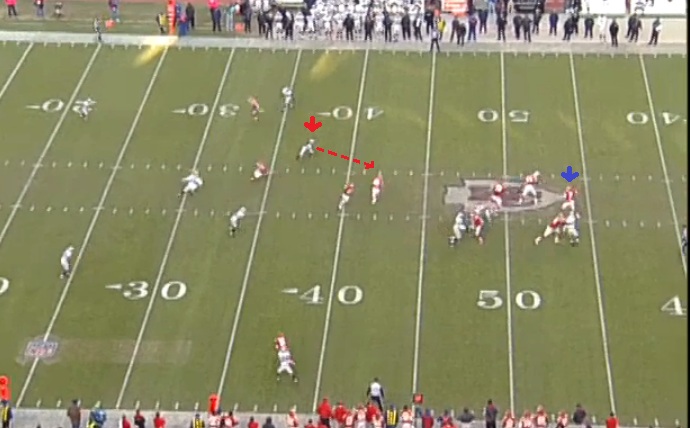 With his exceptional short burst quickness, Wheeler closes on Hillis and plants him in the turf before he has a chance to turn and pick up yardage. 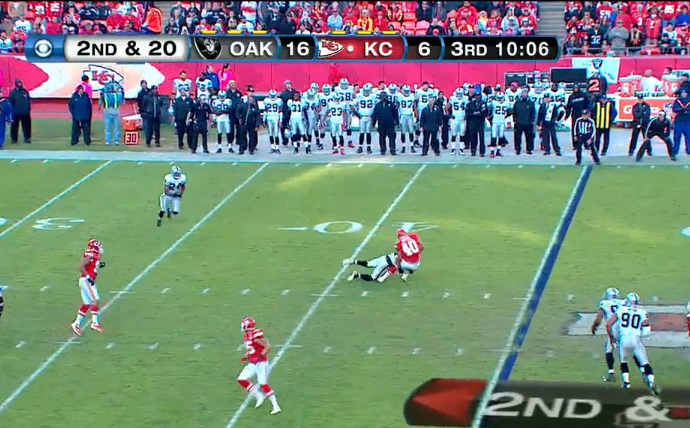 The Dolphins employ plenty of zone in their defensive philosophy, and it appears Wheeler is a solid fit. However, as I explained, he can be a liability in man coverage, and will not fare well if matched up with one of the top-tier tight ends that Miami will face this year.

Prior to last season, Wheeler was rarely used in the pass rush. The Colts only asked him to rush the passer an average of 16 total times per season from 2009 to 2011, according to PFF's player participation data. Needless to say, he produced very little in that department and recorded just two sacks in his four years in Indianapolis.

But again, this all changed when Wheeler went to Oakland. The Raiders frequently blitzed with him and he was extraordinarily productive, amassing 30 combined quarterback sacks, hits and hurries on the season.

Pass rushing proved to be Wheeler's foremost talent, one that went completely undiscovered during his time with the Colts. His +8.5 pass rush grade from PFF was by far the highest of any Raider linebacker and only trailed full-time defensive end Desmond Bryant for the top grade on the team.

Wheeler held the second-highest Pass Rushing Productivity score of any 4-3 outside linebacker in 2012, even one spot ahead of the greatest pass rusher in the game, Von Miller (don't read into that too much).

Earlier, when discussing Wheeler's shortcomings in run defense, I mentioned that he prefers to use his agility to go around blockers than allow himself to be engaged. It turns out that he's very good at it, and it's that skill that makes him a very capable pass rusher.

As demonstrated here, during Oakland's Week 12 loss to the Cincinnati Bengals, Wheeler (blue arrow) is exceptionally nimble and has a knack for distorting his body to get through to the quarterback. 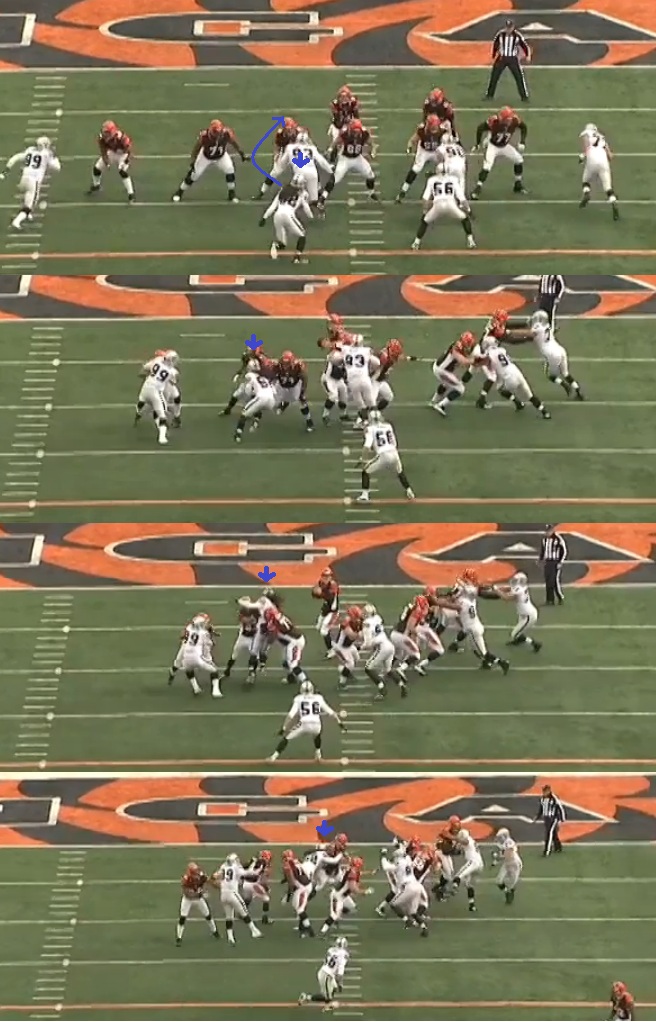 The lineman that Wheeler beat on the play was Andre Smith, one of the premier tackles in the league.

Undoubtedly, a major factor in Wheeler's desirability as a free agent was the pass rushing skills he showed during his season in Oakland. He'll be an important supplement to the Dolphins pass rush this year, and the value he provides in pressure on the quarterback is just as important as his coverage abilities.

Philip Wheeler went from potential backup material to a high-priced starter after just one season as a full-time starter in Oakland. Miami has a lot, $13 million guaranteed to be specific, riding on whether he can sustain that level of play.

Schematically, Wheeler will have every opportunity to highlight his skill set and his athleticism in the Dolphins defense. It'll largely be up to the coaches to keep his weaknesses, namely man coverage and engaging blockers, from being exposed by opponents. If this can be done, Wheeler has all the ability to be a productive starter for Miami for a long time.