The many looks of the 2013 Miami Dolphins

The 2013 NFL Draft is behind us, free agency has slowed down, and the team is focusing on mini-camps and offseason workouts. But, the team has a ton of flexibility built into the roster this year. He's a look at the many different formations and personnel packages Miami could use.

Share All sharing options for: The many looks of the 2013 Miami Dolphins

The 2013 NFL regular season is still four months away, but it's never too early to start imagining what the Miami Dolphins will put on the field this year. Through free agency and the NFL Draft, the Dolphins have built not just a set of 22 starters, but have developed flexibility all over the field, able to rotate players in and out of packages.

Below, I have developed a series of images to show what could be different formations for Miami this year. Obviously, things will change as the summer progresses. Like, I don't really expect Nate Garner to be the starting right tackle this year.

There are also my best guesses as to what Miami could do with certain positions. I know people are big on the idea of Dallas Thomas as the left guard and Richie Incognito moving to right right side. That makes a lot of sense, but I'm skeptical of the Dolphins wanting to put a rookie next to a second year player who is starting at left tackle for the first time. Thus, Incognito stays on the left.

I've also moved Marcus Thigpen into the slot receiver position, despite not having done it yet on my depth chart.

Here are my thoughts on the Dolphins' major formations. There are still other options and combinations that can be used, but I think these are pretty close to the major ones.

Also, a quick note, the offenses are listed by numbers, such as 21. In a 21 offense, there are two running backs and one tight end. From there, you can calculate how many wide receivers. With five offensive linemen and one quarterback, there are five other positions available. In a 21, three are taken up by the two RBs and one TE, leaving two WRs. Make sense? 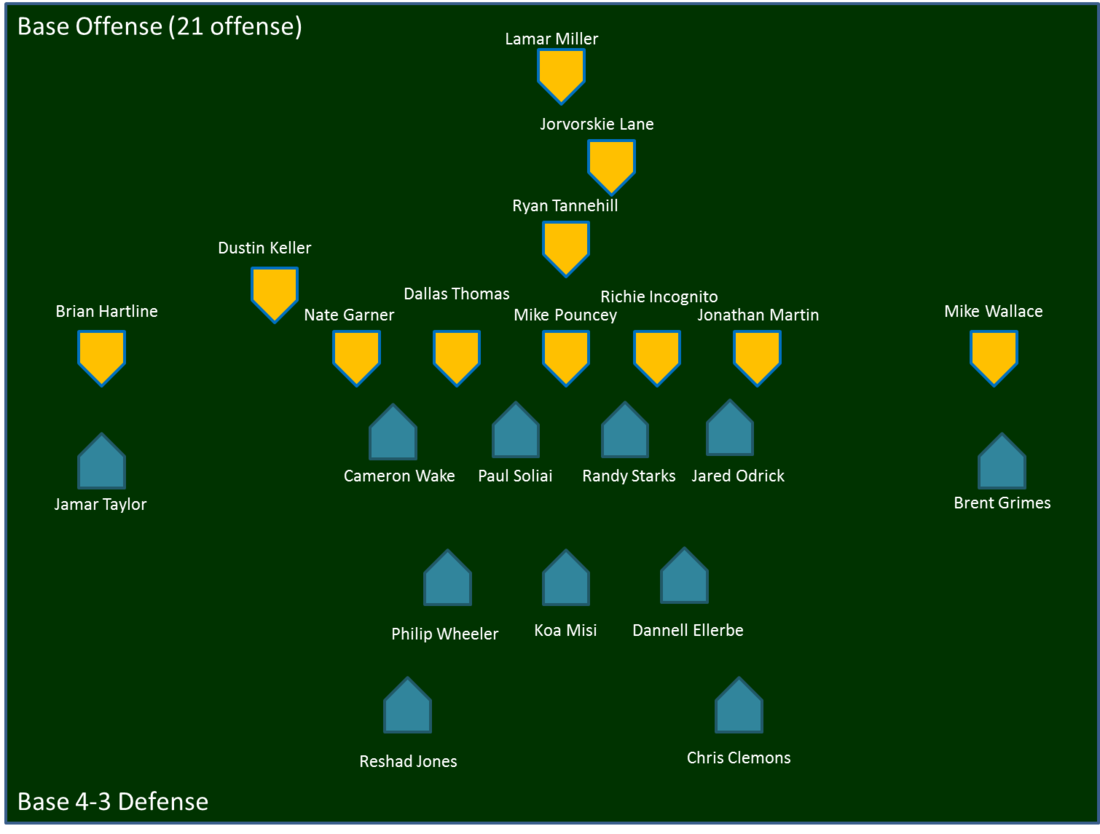 This is the formation, on both sides of the ball, I am most comfortable predicting. Obviously, Brent Grimes has to be healthy, but I think everything else makes sense. 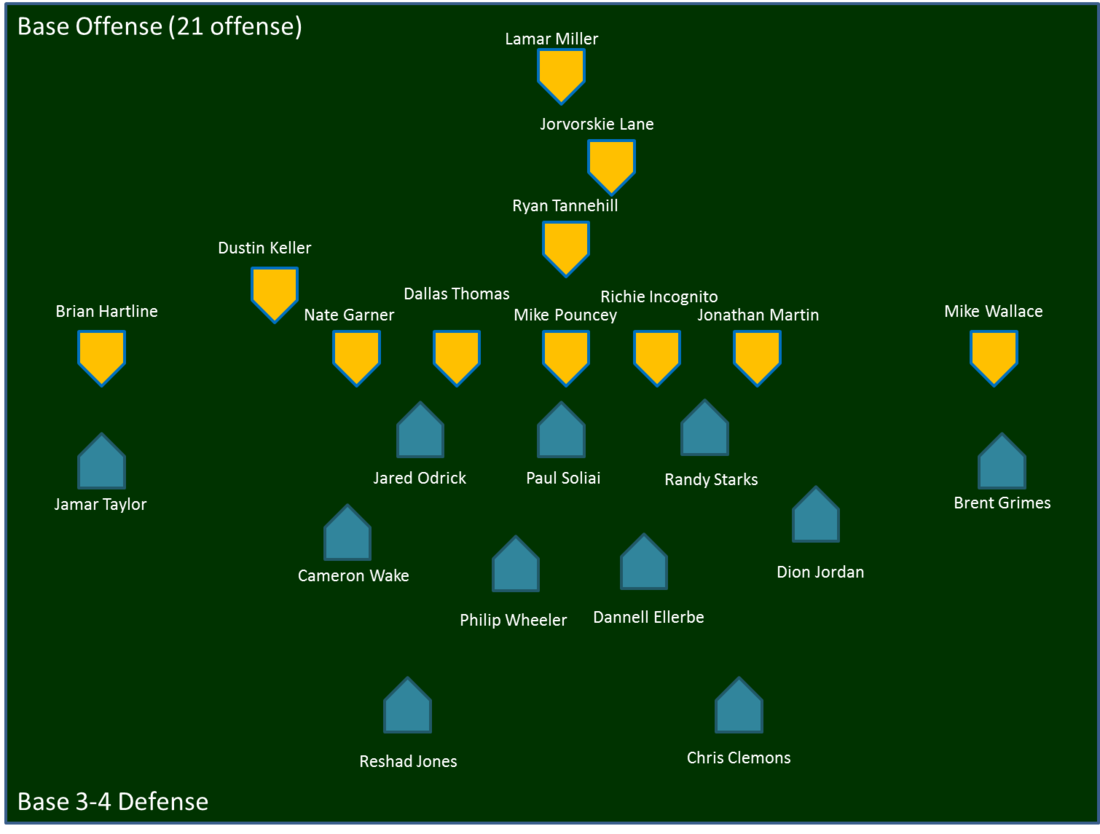 Miami is absolutely set up to run either a 4-3 or a 3-4 defense. That's not something common in the NFL, but in Miami, the "hybrid" would work extremely well. 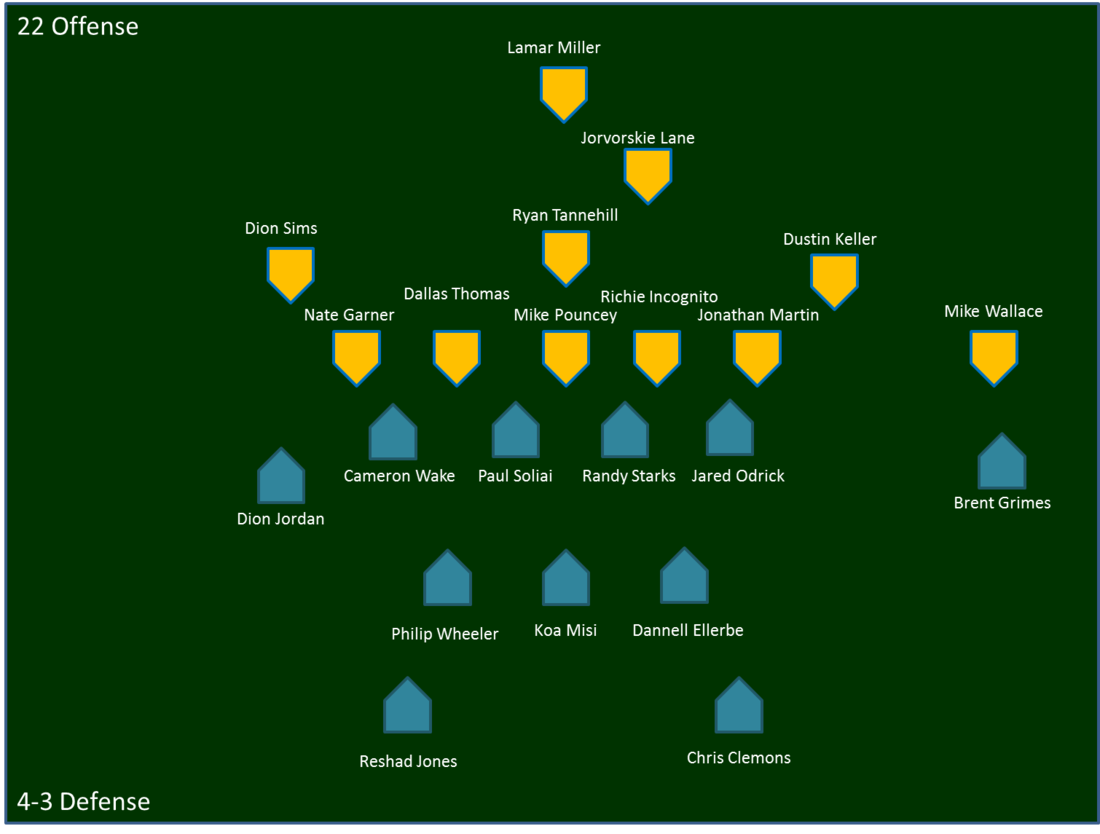 Technically, this is more of a 4-4 or a 5-3 defense, but given Dion Jordan's ability to line up as a cornerback, I will still call it a 4-3. Jamar Taylor comes of the field for Jordan in this case, letting Miami's first round pick cover the extra tight end. 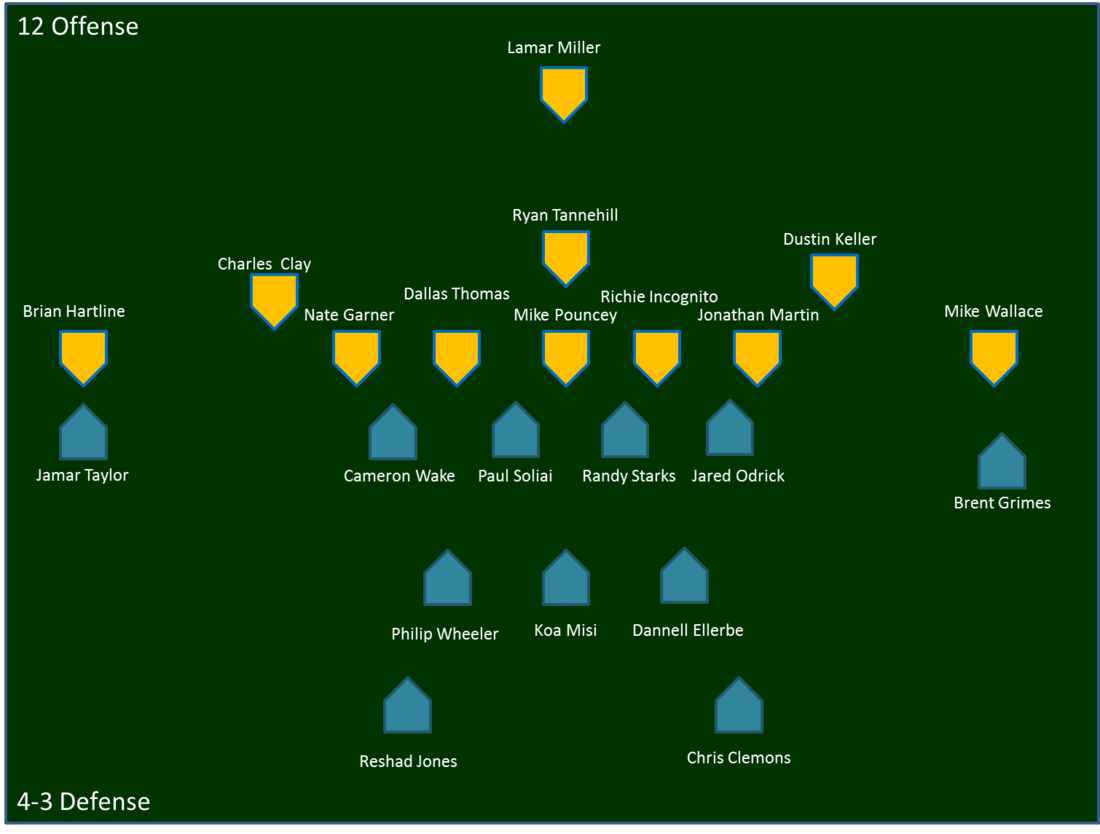 In this case, the defense remains in the base form, with Dannell Ellerbe and Philip Wheeler responsible for tight end coverage. On offense, I slid Charles Clay into the second tight end spot instead of Dion Sims for no reason other than putting Clay into one of these charts. I think it makes sense in this case, given he is also a fullback, so while it's a 12 offense, putting Clay in motion could turn it just as easily into a 21. 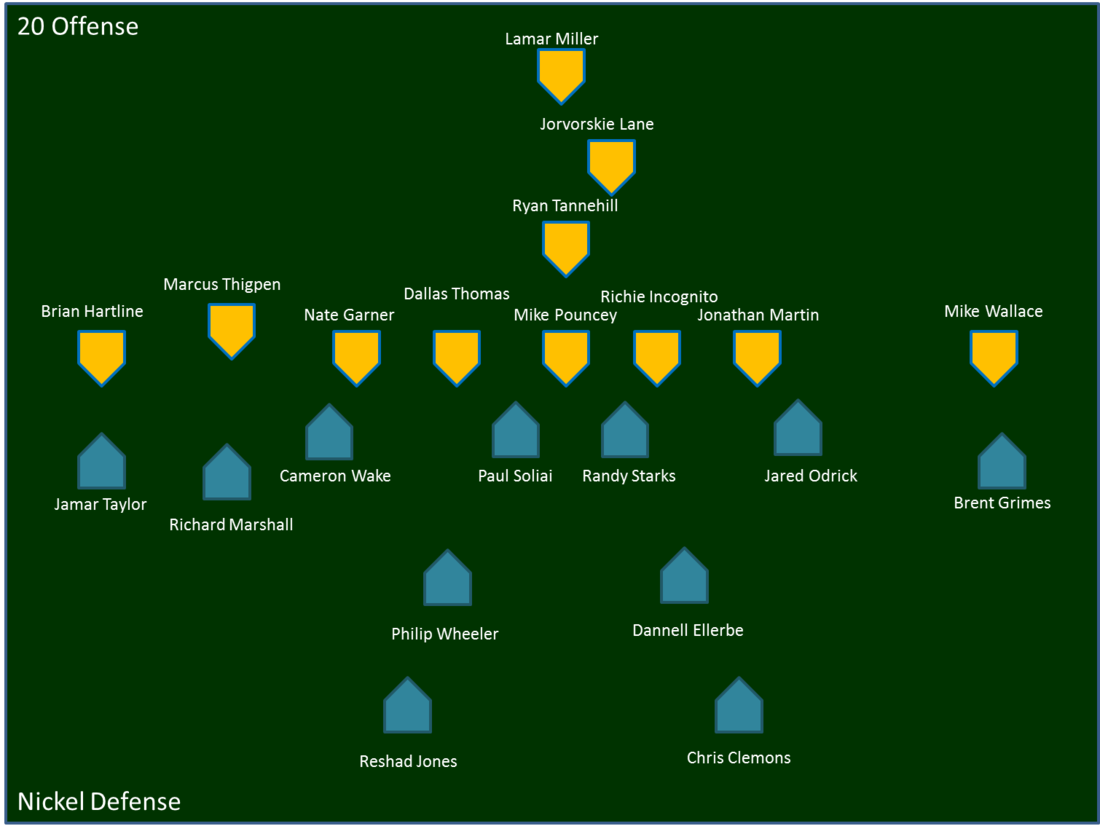 We've now reached the point where offensive formation changes force defensive changes as well. A 20 offense puts a slot receiver on the field, in this case Thigpen, and loses the tight end. The defense reacts by taking a linebacker off the field (Koa Misi) and adding Richard Marshall, who was supposed to be the inside cornerback last year when Vontae Davis got demoted to nickel before the trade. 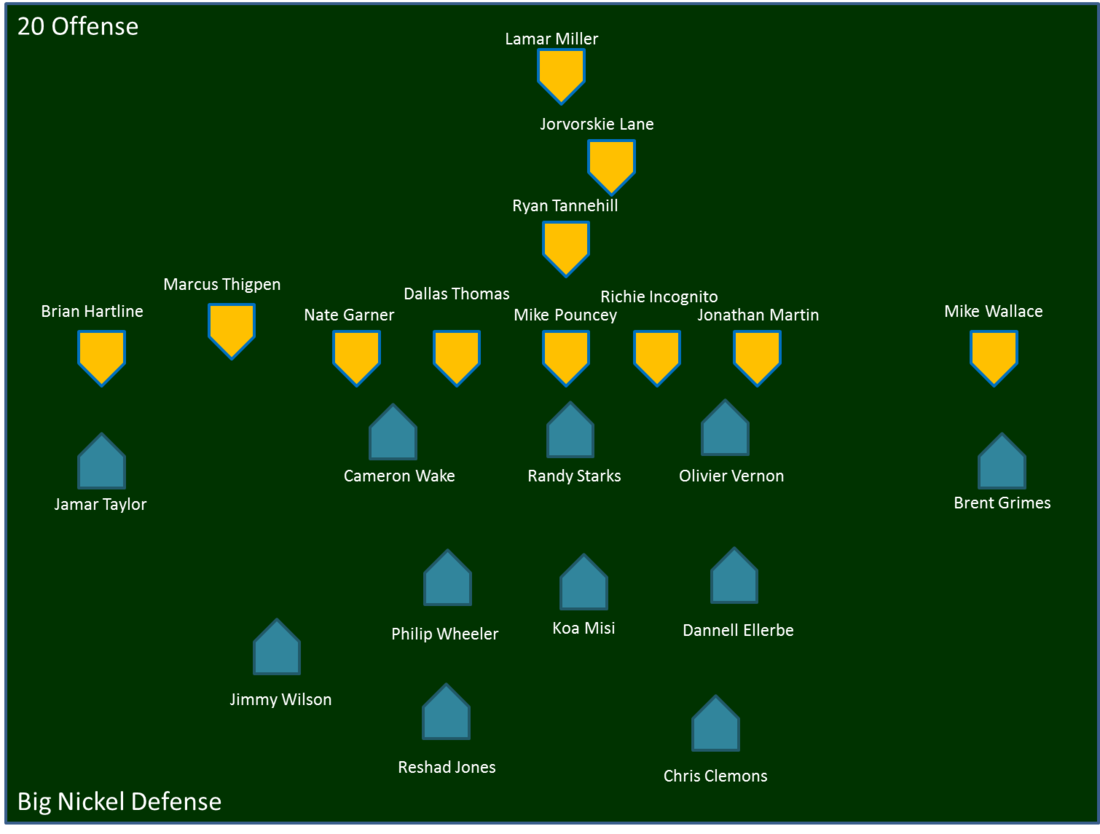 Miami slid into this formation at different times last year. Essentially, it drops the nickel corneback into a safety role rather than in man coverage. Marshall could move back into this formation, but, more likely, the Dolphins will use Jimmy Wilson, who they want to use as a safety but has spent the last two years primarily at corner, here. 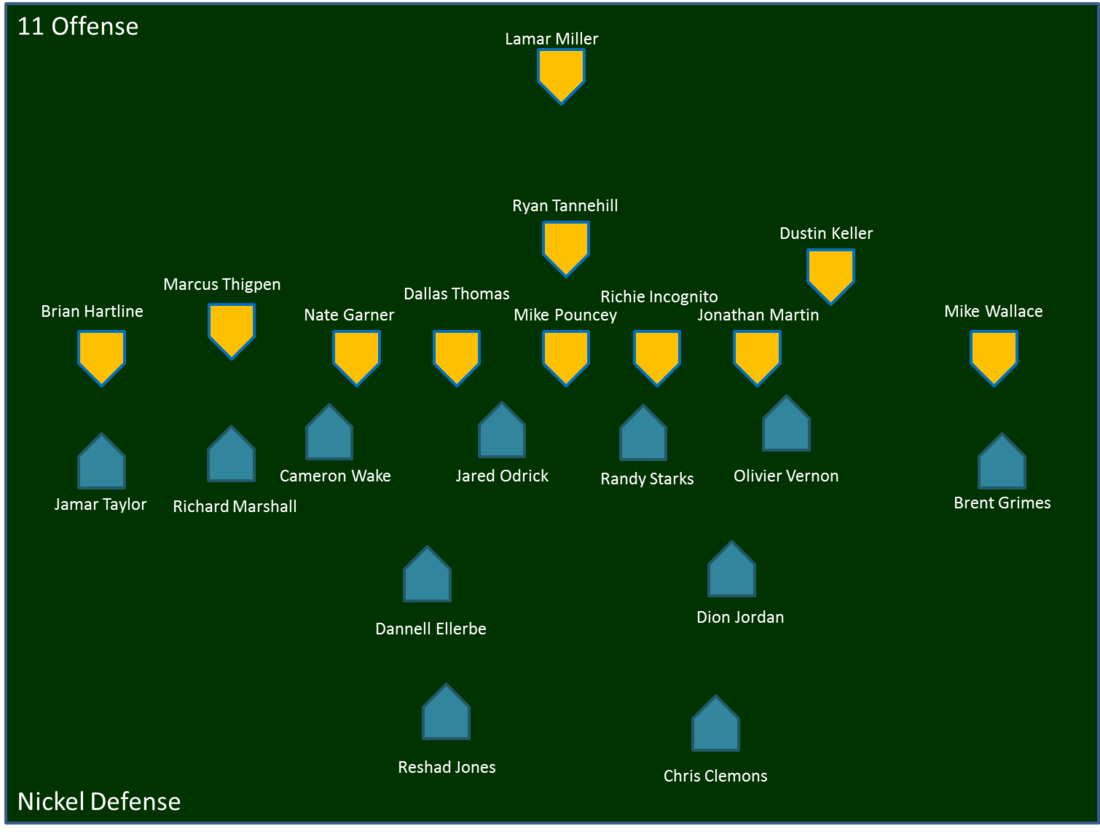 Nothing overly surprising here. Instead of a fullback, Miami has Keller on the field in a three wide receiver set. I took Wheeler off the field at linebacker and lined Jordan over Keller, again allowing him to cover the tight end. I also love this formation because it puts Wake, Vernon, and Jordan on the field at the same time. 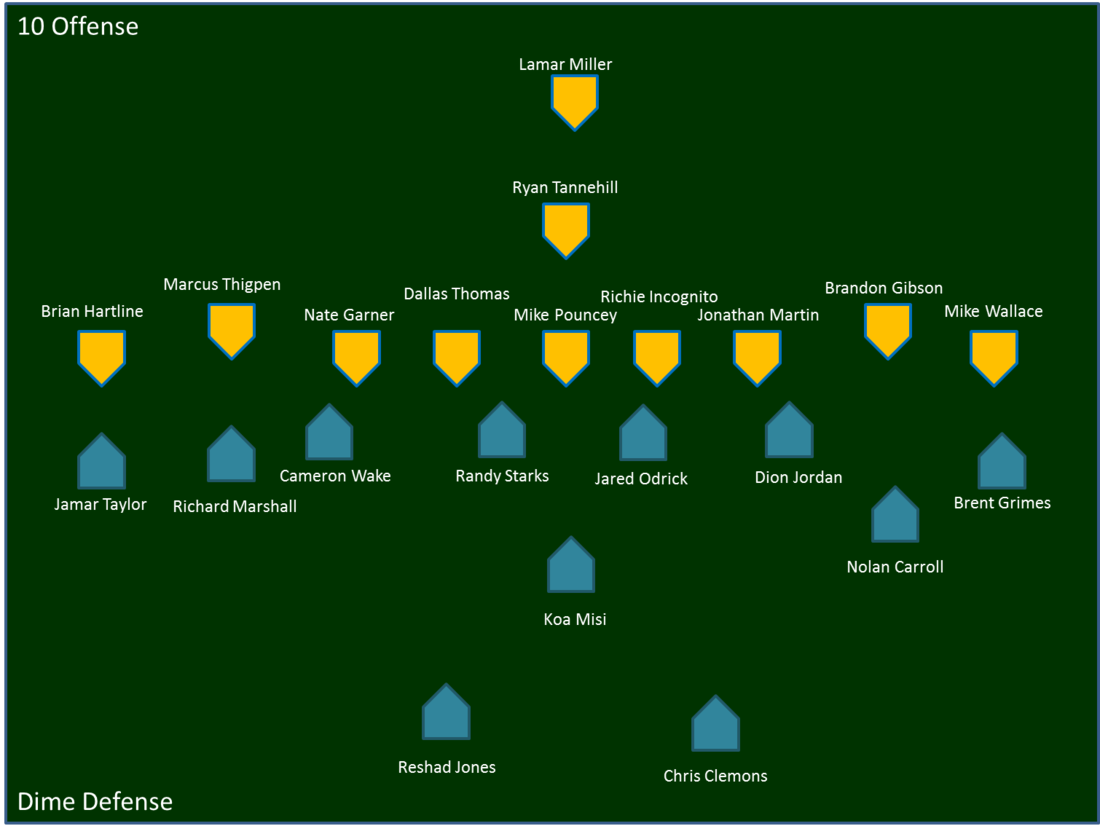 You're starting to empty the backfield and line up all your wide receivers at this point. Lamar Miller is still back there, and he's either going to be the responsibility of Misi, one of the safeties, or Jordan in this formation. Nolan Carroll comes on as the fourth cornerback now, lined up against Brandon Gibson as the fourth wide receiver. 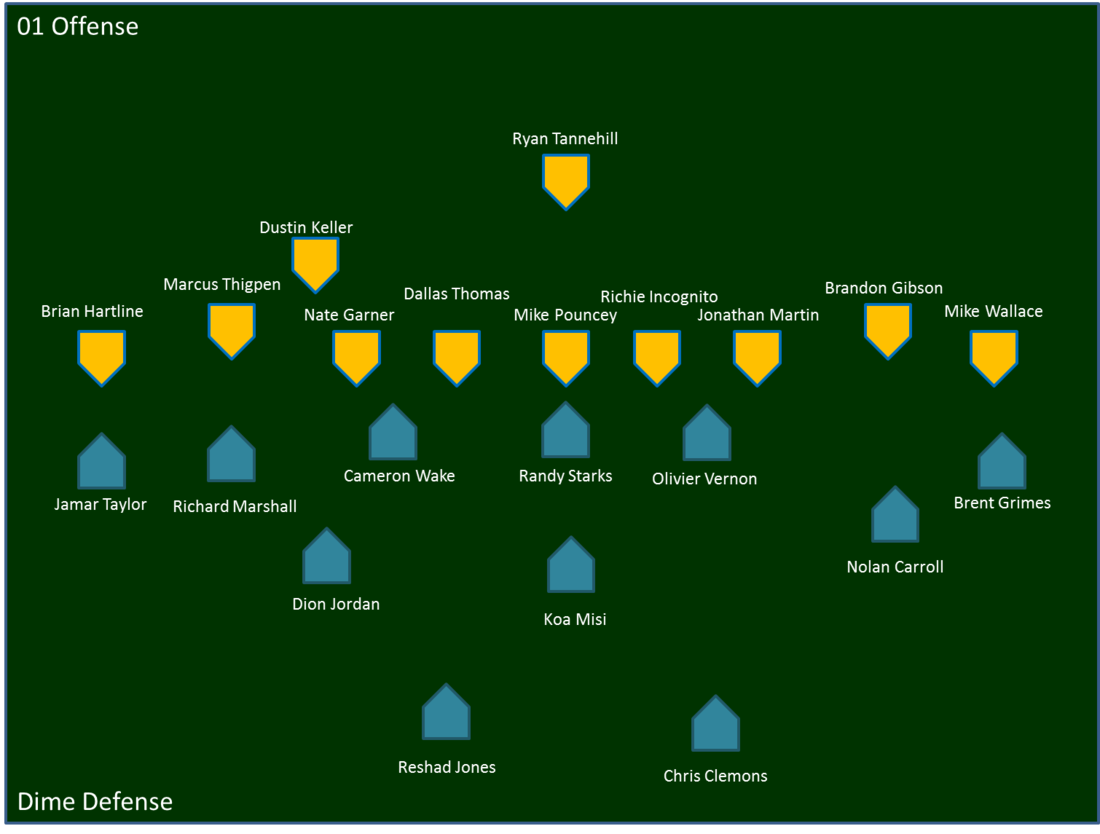 Now the offense is just getting silly. Hartline, Thigpen, Keller, Gibson, Wallace - you cover that. Once again, I drop Jordan into a cornerback/linebacker hybrid role, putting him on Keller. Otherwise, the Dime is the same as the one above. 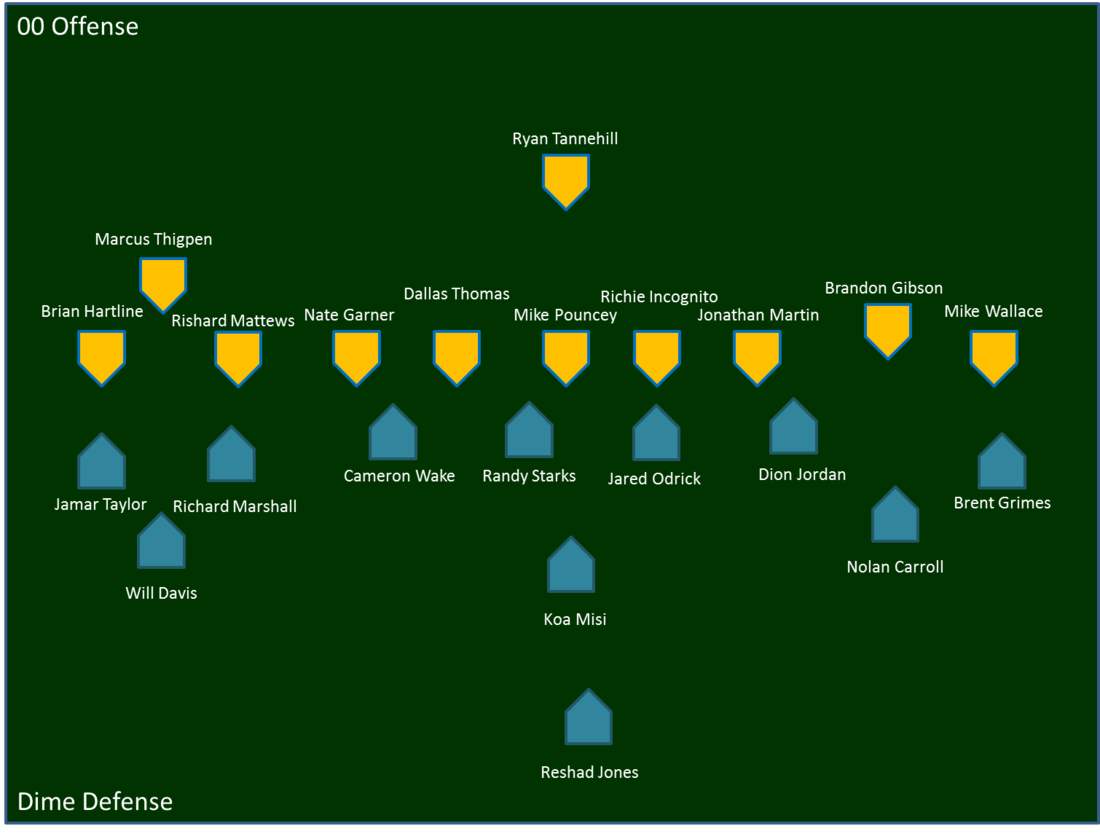 Remember when Miami had the "worst receiving corps in the league" at this point last year. When Chad Johnson was the most accomplished member of the group? Now, in a five wide receiver set you have Hartline, Thigpen, Rishard Matthews, Gibson, and Wallace. Or Armon Binns. Or Jeff Fuller. Or Brian Tyms. If you are not having to hope for a development in your wide receiver corps until your fifth wide out, you are doing pretty well. I put Will Davis as the fifth cornerback at this point, although people will say it should be Dimitri Patterson. I agree - if I didn't think Patterson was going to end up cut before the season. His salary just does not equal a fifth cornerback. I think the biggest competition for Davis in that spot is R.J. Stanford. Other than Davis or Stanford, you could see Wilson, Julian Posey, De'Andre Presley, or Don Jones also there.

What do you think? Do you like the lineups? Do you see how ridiculous this team will be this year, especially on defense? The defensive line rotation alone should be enough to scare opposing quarterbacks.