What is the one moment in Dolphins' history you would change?

An offseason discussion giving you a chance to go back in Miami Dolphins history and change one moment. Which one would it be?

Share All sharing options for: What is the one moment in Dolphins' history you would change?

You have the power to change the fortunes of the Miami Dolphins. Not the present or future direction of the team, but something from the past. You get the opportunity today to go back and change one moment.

For me, there is one easy answer. Despite all the coaching hires I would change (Dave Wannstedt? Cam Cameron?), it's a moment in one game. One moment in one game could be the difference between a third Lombardi Trophy sitting in Davie, Florida right now, and a 9-7 record and no playoffs.

There is one season between 1983 and 1999 in which Dan Marino was not the leading passer for the Dolphins. In 1993, that honor went to Scott Mitchell because of one moment.

Miami was expected to be a beast in the AFC. The previous season, they finished the regular season 11&5, winning the AFC East, and advanced to the AFC Championship. Despite losing to the division rival Buffalo Bills, the Dolphins were considered among the favorites in 1993 to make it at least as far, if not to Super Bowl XXVIII in Atlanta. 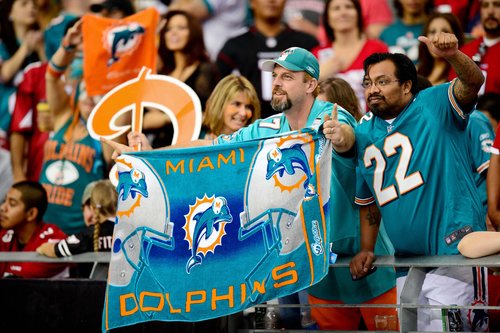 Have you joined our Phinsider Community Interactive Map yet? If not, check out exactly how you can be represented here.

The season started off well for the Dolphins, going 3-1 over the first four games, and Dan Marino already having thrown for 1,057 yards. Miami was on the way to a dominating season, and would likely face the NFC favorite Dallas Cowboys at the end of the season. (A team they would beat in Week 13's Thanksgiving Game, thanks to Leon Lett touching a blocked field goal - but that's beside the point here.)

One of those two teams would make the Super Bowl. One would not make the playoffs.

In Week 6, the Dolphins traveled to face the Cleveland Browns. Marino had started 145 straight games coming into the contest (not counting strike games), but, as the game was closing in on halftime, the moment happened. Marino dropped back and threw a swing pass that resulted in a 10-yard gain. As everyone started to work their way down field for the next play, there was Marino, laying in a heap after not being touched on the play.

It was not good.

Marino tore his right Achilles' tendon on the play.

"It felt like I got kicked," Marino told reporters later. "I haven't been hurt enough to know exactly what happened, so it was a real shock. But, no matter what the circumstances of this injury are, I will be back. I will play football again."

Marino was 31 at the time, and questions of his ability to return began almost before a diagnosis was made.

Scott Mitchell stepped in and won the game for the Dolphins that day, and, along with Steve DeBerg, would lead the team to a 9-2 after the Thanksgiving game in Week 13 against the Cowboys. However, the wheels fell off after that, and Miami finished the season 9-7, and out of the playoffs.

Obviously, Marino did come back the next year, when he threw for 4,453 yards, the third highest season total in his career, with 30 touchdown passes. The Dolphins, however, were never the team they could have been in 1993. They lost to the San Diego Chargers in the Division round of the Playoffs in 1994.

If I could change one moment in Dolphins history, it's that pass in Cleveland in 1993. The Dolphins were on the carpet covering the baseball infield at the time, and something in the way Marino planted that back foot to throw just did not work.

Would a healthy Marino have been able to to get Miami into the playoffs? Into the AFC Championship? The Super Bowl? Who knows. But it would have been a special season if he could have tried.

Now, it's your turn. What moment would you change?