A look back at the all time greatest jersey numbers in the Miami Dolphins history. The 8th best number in team history is...

We are three days into our countdown of the top numbers in Miami Dolphins history. After looking at the numbers 91 and 22 over the past two days, we now come to the eighth number in team history.

Why your screen name? 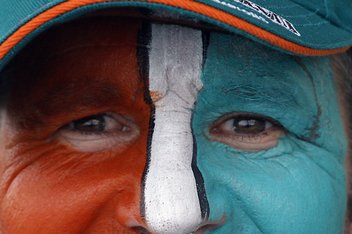 It's the offseason. Why not use this time to talk about some other things? How about, why your screen name is what it is?

Our eighth best number for the Dolphins' franchise is 73.

Norm Evans wore the number starting with the Dolphins' franchise first season. From that 1966 year until 1975, Evans served as the team's starting right tackle, appearing in 138 games, with 135 starts. He was selected to the Pro Bowl after the 1972 and 1974 seasons. He would move from Miami after 10 years in the aqua 73, joining the Seattle Seahawks for a final three years (1976-1978).

After no one wore the jersey in 1976, second round draft pick Bob Baumhower would don the number 73 from 1977 to 1986. During his nine years the Dolphins nose tackle (he missed the 1985 season after knee surgery), Baumhower appeared in 130 games, starting all but one. He recorded 14.5 sacks over the last four years of his career, the first time the stat was recorded. Baumhower would be named to the Pro Bowl five times in his career, including four straight appearances from 1981 to 1984. He was also a First Team All Pro selection after the 1983 season.

After Baumhower's retirement, the number sat empty for a year before fourth round draft pick Greg Johnson held it for one year, appearing in one game at tackle during the 1988 season, his one and only appearance in the NFL.

The number was taken up again in 1993, when Ron Heller picked it up for a three year stint. Heller came to Miami after a five year run as the Philadelphia Eagles' left tackle, but played right tackle for Miami, appearing in 39 games over the three years, starting every game. A knee injury seven games into the 1995 season forced him to retire, despite having played two of the best years of his career his first two with the Dolphins.

After Heller, the 73 would lie dormant until 2003, when Billy Yates picked it up. Yates began a massive turnover with the number, with seven more players holding the number between then and now. Three players held it in 2012 alone.

Currently, the number is being worn by undrafted free agent tackle Patrick Ward (pictured in the number 70 for Northwestern last season).