A Look at Ryan Tannehill and the Read Option

In 2012, the prevalent use of the read option attack emphatically ushered in a new era of athletic, talented quarterbacks. Quietly among the teams to use the option last season was the Miami Dolphins, using their own quarterback's athleticism to add another element to their offense.

Share All sharing options for: A Look at Ryan Tannehill and the Read Option

There's one thing worth clarifying: the read option is not an offensive scheme. It's a wrinkle used in different ways and to varying degrees by different teams. It will not replace a team's overall offensive philosophy, nor should it. It's simply another look for the defense to prepare for and defend.

Still, as proven by the postseason landscape last season, having the play in the repertoire can provide an entirely new dimension to an offense, especially one with a quarterback who can make plays with his arm and his legs. Ryan Tannehill fits that bill, and the Dolphins unveiled their own version of the option late in the year.

The question is, how effective can this play be for the Dolphins? Until there's more of a sample size, that's a tough question to answer. Also, it's difficult to predict how well defenses will have adapted after an offseason to study. Regardless, I'll analyze what Miami has put on tape so far and try to provide some insight on how effective Tannehill can employ the read option, and how it meshes with the team's offensive philosophy.

The more prolific option attacks run by Seattle's Russell Wilson, Washington's Robert Griffin III and San Fransisco's Colin Kaepernick each have their own variances, but all rely on the underlying concept of the read option: to eliminate defenders without blocking them. It forces the defense, typically a single defender, to make a choice that the quarterback then exploits.

I'll show how this is accomplished and how well Tannehill executes the play, but first here are some of the different looks that the aforementioned teams typically run the read option out of: 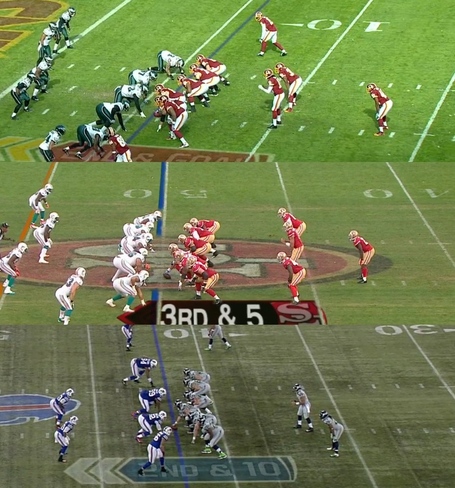 The pistol formation, shown here being used by Washington and San Fransisco, gives the offense some specific advantages in versatility and ambiguity. But, as shown here by Seattle, the read option is also often run out of a more traditional one-back shotgun set.

This is already an integral part of Miami's offensive identity: spread formations with one running back, with versatility in personnel to be suited for the run play or pass. Miami's running game is already predicated on spreading the defense out; less of a focus on size to move defenders but speed to keep them spaced out. These attributes can make the read option, if executed properly, an effective element for the Dolphins offense.

Late in the season, Miami began to incorporate the option in small doses. It's first appearance was in the Dolphins' Week 13 loss to the Patriots.

At the goaline, Miami lined up in a three-receiver, shotgun set. The 'read' on this play was Patriots' outside linebacker Rob Ninkovich. 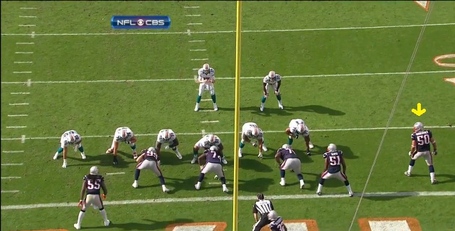 After receiving the snap, Tannehill stretched the ball out to Daniel Thomas, while keeping his eyes on his read. As soon as Ninkovich sold out for the dive, Tannehill pulled the ball away and ran to the vacated area in field for a touchdown. 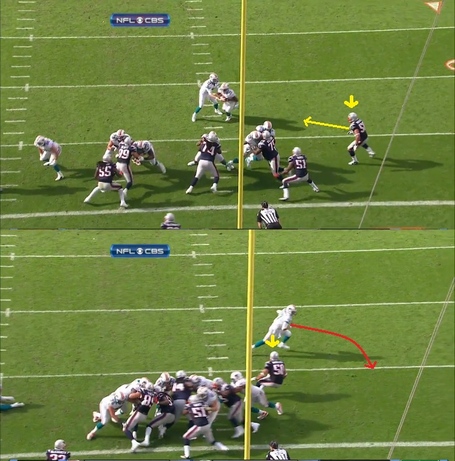 Ninkovich was effectively taken out of the play, without so much as a blocker touching him. The predisposition to the short passing game that Miami has out of this formation helped this play be especially effective.

As Miami lined up, New England shifted safety help to the two-receiver side of the play. This left six defenders in the box, in a goal line situation, with Miami's most commonly-used goalline back on the field. Additional pressure was placed on the middle of the run defense. 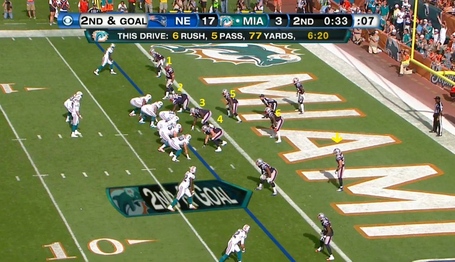 This was the one and only time that the Dolphins used the option in this game. Three weeks later, they'd expand on what they started, and give a hint at the potential Tannehill has running it.

Miami ran the read option ten times in Week 16 against the Buffalo Bills, and got extraordinary production.

Tannehill did not always make the correct read, and fumbled one exchange with Reggie Bush. But as the stats indicate, the option helps get playmakers out in space and gain big chunks of yardage. This includes Tannehill, who showcased his speed and athleticism on a 31-yard pick up in the second quarter.

The 'read' on the play was Bills' left defensive end Mario Williams, highlighted by the yellow arrow. Right tackle Nate Garner, highlighted by the red arrow, made no attempt to block Williams and moved to the second level. Williams crashed inside unblocked to tackle the running back. 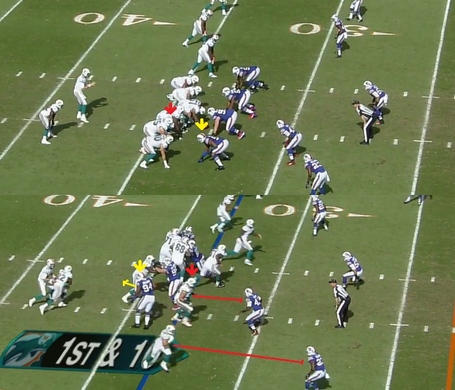 Tannehill made the correct read, kept the ball and scampered down the sideline for 31 yards, making multiple defenders miss on the way. 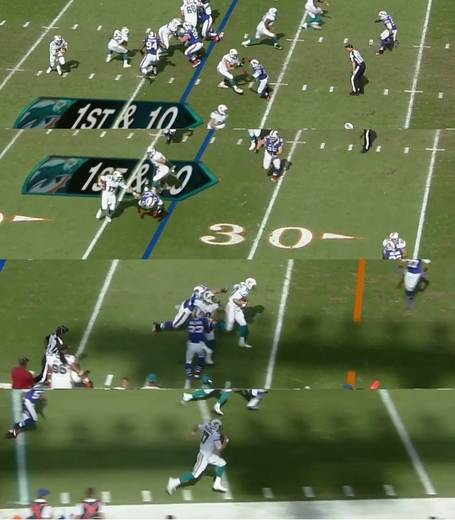 Before the advent of the read option, defenses did not need to account for a quarterback on a running play. Now the defenses must remove a player from pursuit to keep contain on the backside of the play, or risk a big gain by the quarterback.

In 2013, the Dolphins will have a number of new perimeter weapons that will command additional attention from safeties and linebackers. This fact should further open up spacing around the edges and in the middle of the line of scrimmage, providing chances for bigger gains on all running plays. Incorporation of the option will force defenses to respect Tannehill's mobility, and give the Dolphins a dangerous new dimension to their existing offensive philosophy.

What was learned in the limited sample size from 2012 was that Tannehill has both the brain and the legs to orchestrate a successful option. Will Miami expand on the play, perhaps including a passing element that has been successful for the other read option teams? Time will tell, but rumor is that it'll remain a part of the offense going forward.