What Do the Dolphins Have in Richard Marshall?

Last offseason, the Dolphins signed Richard Marshall to a sizeable free agent deal to start at cornerback. Unfortunately, he went down early in the year with an injury, and his team gave the position a complete makeover once the season ended. So now that Marshall is healthy again, does he still fit in with the team's plans?

Share All sharing options for: What Do the Dolphins Have in Richard Marshall?

No matter what, the Miami Dolphins secondary will look drastically different in 2013. The team drafted cornerbacks Jamar Taylor and Will Davis in the second and third rounds respectively and signed former Atlanta Falcon Brent Grimes. Gone is Sean Smith, off to Kansas City after being allowed to walk in free agency.

The Dolphins must figure out what to do with Richard Marshall, who is coming off a major back injury that ended his 2012 campaign after just four games. It now seems the team has plenty of options at the position, and could save a significant amount of cap space this year and next by cutting the 28-year old veteran.

But what does Marshall bring to the table? Would it be a better move for the Dolphins, who are in no need of the extra cap space, to hang on to him?

To attempt to answer these questions, we need to look beyond this past season. Four games is not enough sample size to assess a player's potential value.

We need to go back to 2011, when Marshall served as a slot cornerback for the Arizona Cardinals until midseason, when he took over the starting job for a benched A.J. Jefferson. Here's a look at his raw statistics for his 13 games after becoming a full-time boundary cornerback, including his time in Miami:

Numbers like those would put Marshall on par with some of the premier cornerbacks in the league. Chicago's Charles Tillman and Cincinnati's Terence Newman allowed similar passer ratings when targeted, to give the stat a little perspective.

Per usual, the statistics only tell part of the story. To truly uncover the type of player Marshall is, one must turn to the game film.

What the tape shows is an aggressive player that while clearly not a 'shut down' corner, can usually be found in the hip pocket of his assignment. Marshall generally has a good feel for what the receiver is trying to do and usually acts quickly on a break, often preventing the completion or making the tackle before the receiver can make a move.

The fact that Marshall has given up 78 yards of YAC total in those 13 games, roughly an average of 1.7 yards per catch, is strong evidence of his ability to stay close to his man.

One good example of this is was in Week 1 of this past season, on a play when Marshall was isolated on Houston Texans star wideout Andre Johnson.

Johnson ran what seemed to be a go route before hitting the brakes and coming back towards the quarterback, who had executed a play action fake that essentially removed any safety help. Marshall adeptly turned and ran with Johnson before reacting quickly to the route break and swatting down the pass. 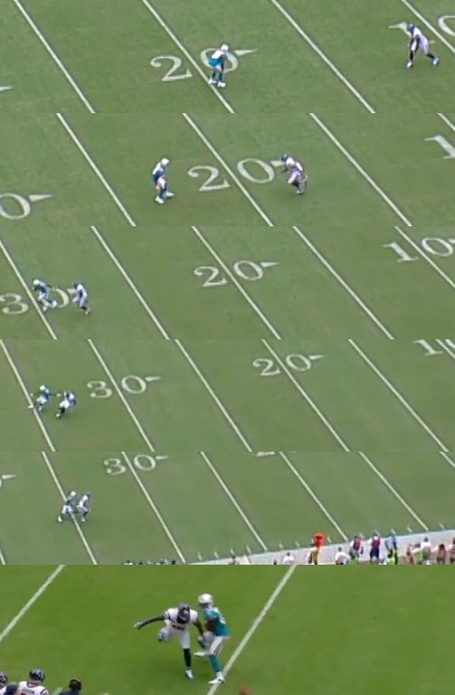 The same aggressiveness that makes him this effective at times also makes him susceptible to double moves, and results in a higher-than-average rate of defensive pass interference penalties.

These are the reasons why the Dolphins signed Marshall to a 3-year, $16 million contract a year ago. But now, Marshall must compete for his starting job with two rookies and Grimes, who is a premier cornerback when healthy. That same contract, which carries a cap hit of $5.76 million this year, may be the reason Marshall is ultimately not retained.

If his back injury doesn't become a chronic issue, Marshall can provide real contributions to this defense. It is the opinion of this writer that, given Miami's current abundance of cap space, not only keeping the veteran on the roster but in a starting capacity is the wise move. Grimes is coming off an ACL injury and the rookies are an unknown quantity.

Having the stability of Marshall would be an asset while the Dolphins acclimate their new players while still hoping to be competitive against the many lethal passing attacks on their 2013 schedule.

All player statistics used in this article are courtesy of Pro Football Focus. Contract info is courtesy of OverTheCap.com.