Hartline ranks Dolphins' WRs as top in AFC East; Is he wrong?

Miami Dolphins wide receiver Brian Hartline appeared on NFL AM yesterday. During the conversation, Hartline stated that the Dolphins have the top receivers in the AFC East. While it sounds like bravado, is he wrong?

Share All sharing options for: Hartline ranks Dolphins' WRs as top in AFC East; Is he wrong?

The Miami Dolphins have had a crazy offseason. The team signed wide receivers Mike Wallace and Brandon Gibson, along with tight end Dustin Keller, in free agency. Miami also brought back their leading receiver from last year, re-signing Brian Hartline to a five year contract.

The whole passing game is an advantage of ours. -Brian Hartline

On Monday, Hartline appeared on NFL AM, discussing the changes around Davie this year, from the logo change to the roster moves. One of the things that caught a lot of headlines was a question posed to Hartline, specifically, is the Dolphins' wide receiver corps the best wide receiving corps in the division.

Remember, before you react to Hartline giving someone "bulletin board" material, or think he is running his mouth without anything to stand behind it, he was asked a specific question about the receiver corps. Was he supposed to answer that they aren't the best?

His answer was perfectly worded. He answered the question, but admitted that they still need work, too.

"Absolutely I think that. Add Dustin Keller in there. Lamar Miller's a great back and Daniel Thomas is a great back out of the backfield. The whole passing game is an advantage of ours.

"But everyone knows, it's kind of a quarterback run league. Ryan [Tannehill]'s making a lot of improvements and is looking forward to going head to head with these quarterbacks in our division. The receiving corps is there, we've got some parts in the passing game, Ryan's getting a lot better. We're just looking forward to putting this on the field this coming season.

Absolutely nothing in his comment is "bulletin board" material. Of course the sexy headline is that Hartline declared the Dolphins the top receivers in the division. People are going to grab that and run with it.

Which made me ask, is he wrong? 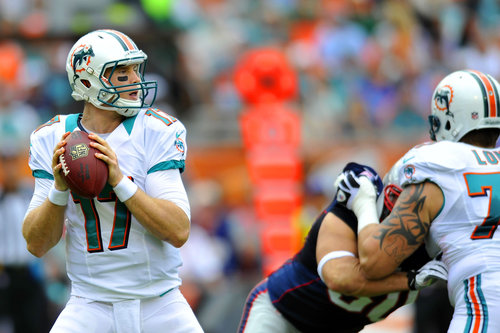 Is there a group of wide receivers in the AFC East that are better than the Dolphins'?

Starting at the top of the division, the New England Patriots currently have a group led by Danny Amendola, Michael Jenkins, and Julian Edelman. Behind them, that have Aaron Dobson, Donald Jones, Josh Boyce, Kamar Aiken, and Andre Holmes. The team will clearly miss Wes Welker, who bolted the Patriots for the Denver Broncos this offseason. Of course, the Patriots passing game is centered on the tight ends, with Rob Gronkowski and Aaron Hernandez.

After the Patriots, the Buffalo Bills currently have Stevie Johnson as their top wide out, followed by T.J. Graham, Robert Woods, Marcus Easley, Marquise Goodwin, Brad Smith, and Chris Hogan. At tight end, the team has Scott Chandler and Lee Smith.

They are better than the Bills - especially when you add in a comparison of the men throwing them the ball, Miaim's Ryan Tannehill versus Buffalo's Kevin Kolb.

We're just looking forward to putting this on the field this coming season. -Brian Hartline

The Patriots might be on par, especially with the tight ends and quarterback Tom Brady, but on paper, a combination of Wallace, Hartline, Gibson, and Keller should be able to surpass Amendola, Jenkins, Edelman, and Gronkowski. It might be close, but you can at least make an argument for the Dolphins.

Hartline's comment may seem as bravado or being out of line, but really, it wasn't. The Dolphins have one of, if not the, best wide receiving groups in the AFC East. And, given the question he was asked, what else was Hartline supposed to say?