Share All sharing options for: Jeff Darlington: 'This is Ryan Tannehill's team'

This is Ryan Tannehill's team. There's no question in my mind. -Jeff Darlington

During his time on the team's radio show, The Finsiders, Darlington addressed several aspects of the team, including the maturation of General Manager Jeff Ireland, the running back position, and the Dolphins' biggest move in the offseason.

He was also asked about the Dolphins needs going into the offseason and second year quarterback Ryan Tannehill.

In his article on NFL.com, Darlingon wrote that the Dolphins had three clear flaws in 2012:

1) Aside from Cameron Wake's production, they didn't have enough sacks.

2) They dropped far too many interceptions, which factored into the decision to let Smith walk during free agency.

3) And they didn't have enough weapons for Ryan Tannehill, who has every single quality -- from leadership to ability to commitment -- that you look for in a franchise quarterback.

Jeff Ireland: The Once and Future GM 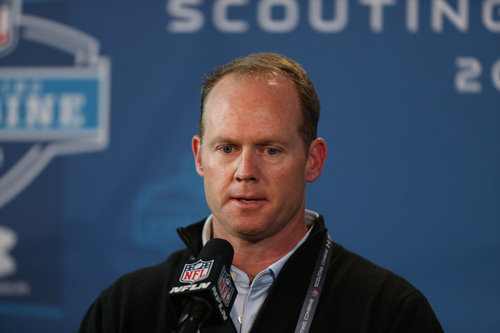 Great players in the NFL didn't become great overnight. They needed time to develop. The same could be said for GMs too. Has Jeff Ireland developed into a good GM?

"That is what the team believes. They didn't have enough sacks. They dropped too many interceptions last year. They did not have enough weapons for big explosive plays. They had to be too perfect on offense and sustain these long drives with a lot of plays in order to succeed. Those are three major factors that contributed to a mediocre season last year. So, that's what they came into the offseason trying to do.

"They got Mike Wallace. Sean Smith was a huge contributor to the dropped interceptions, despite his skill set otherwise. They believe that they are improving those areas. Whether they did enough, we will see, but they did make moves to try to improve those areas."

Look at what Tannehill did, that's a good year for a rookie quarterback. I mean, a really good year -Jeff Darlington

"Tannehill should, and they hope will be, the most improved quarterback in that rookie class," Darlington replied. "It's such an absurd rookie class that you look at. When you take out Luck and RG3 and Russell Wilson, and just put Ryan Tannehill, just remove all of that and just put your blinders on and look at what Tannehill did, that's a good year for a rookie quarterback. I mean, a really good year.

"I think Tannehill has a huge amount of growth ahead of him. And, I've seen a maturation process with him too. He's comfortable with the players in this locker room. He's becoming a leader. He's a guy who will be voted a captain of this team, not just because it's a default situation, but because they really are looking at him as a leader of this year."

Check out the entire interview on Dolphins.com.