The Miami Dolphins have filled their 90-man preseason roster. But, can we predict the 53 man roster? We can at least try.

Miami Dolphins General Manager Jeff Ireland stated recently that his post draft ritual is to take two days, then try to cut the team's roster to the 53-man regular season size. Starting at the 90-player preseason roster, Ireland said he can normally get the cuts down to about 56-57 players. This year, he stated, it's harder.

And that's a good thing. That means that there is enough talent on the roster to make it harder to cut than in past years.

To try to get an idea of what the Dolphins currently have, I tried to break it down into a 53-man roster. I built five categories in my process, a definite, a probable, a bubble, released, and a practice squad. Then, I listed the 90-players simply based on an initial reaction to how secure I thought their spot on the roster was.

It resulted in 28 definite players. Between the definite and probably, there are 52 of the 53 total slots. Then, 15 players ended up as "bubble" players, with another 15 released. And, finally, eight were put on the practice squad.

Here are the players on each list. (And, for the record, they are alphabetized by first name - don't think anything into having Ryan Tannehill as the 27th player on the definite list): 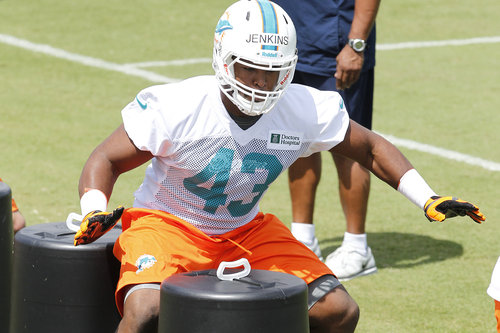 The Miami Dolphins held their rookie minicamp over the weekend, leading to a couple of players being waived, as well as one try out player being added. The team also signed veteran offensive tackle Tyson Clabo. Here's a look at how the depth chart stacks up with all the changes.

There's not a lot to say of the definite slots. A lot of the draft picks end up in this category, as well as the players that are guarantees to make the roster.

Probable means exactly that. These guys are probably on the team. Will there be some changes? Of course. Some players in the bubble list will out play the players here, and you will see swaps. There's also the floating 53rd slot.

Of the players in this section, Caleb Sturgis is an interesting one. Obviously, he or Dan Carpenter are making the team. Right now, I give the nod to Sturgis because he is cheaper and younger - exactly what the Dolphins have been looking to do all offseason. There are also some players, like Dallas Thomas, Lance Louis, and Brent Grimes, who are in this list because of injury questions. If they rehab as expected, there will be no issues with them making the team.

Bubble players could go either way. Some of these guys will make the team, some won't. I list Dimitri Patterson here because I still think he gets cut on June 1, thanks to his $4.6 million salary cap number. I could be wrong, and he could be a key part of the cornerback group, but that's where I see it right now.

Players like Don Jones and Jeff Fuller are either headed for the 53-man roster, or are likely candidates for the practice squad.

The obvious big name here is Dan Carpenter. He falls here because Sturgis is in the probable list. Those two could swap.

After I made the roster, I went back and looked at the positions as listed on the definite and the probable list, trying to see where I was under- or over- representing a position. What I found was, it was actually a pretty decent breakdown:

Remember, that's 52 of the 53 regular season roster positions. Just looking at the numbers, I would probably look to add a wide receiver in that missing roster position, bringing me up to five. I currently have 10 offensive linemen, which I could see dropping to nine, giving another slot, which I would probably turn around and use on another wide out.

As for the defense, I actually like the break down. The defensive tackles are a little weak, but that's counting Jared Odrick as a defensive end, so I would be okay with that small number. Cornerback at five is a little worrisome, given how quickly the Dolphins went through corners last year, but, as with defensive tackles, that does not account for someone in another position; safety Jimmy Wilson could move back to cornerback if needed.

What do you think? Who do I have listed as missing the roster, or on the bubble, that you see definitely making the team? Let us know in the comments below.