After a wild free agency signing period, Miami has a ton of flexibility, and even more options at pick #12 in this year's upcoming draft. While anything can happen, here are the five guys that have the best shot of being Miami's top pick. Who's bandwagon are you on?

Share All sharing options for: The Fab Five: Miami's Top Targets at Pick #12

This has easily been the wildest Miami Dolphins offseason that I can remember. By bringing in big names like Mike Wallace and Brent Grimes, this shows that this team is ready to win NOW. But, it's the signing of guys like Dannell Ellerbe, Philip Wheeler, and Lance Louis, that shows that sometimes we really don't know what's going on in the mind of GM Jeff Ireland.

Make no mistake... there are a plethora of options to explore in the upcoming draft. From trading up, to trading down, to trading to next year's draft alltogether, we could all be stunned in a few weeks on what direction we go (Editor's note: please don't draft a freaking guard!).

A few familiar names seem to surround the Dolphins in the middle of round one, however there is also the possibility of top players falling and surprising us at pick 12. Based on projections and positions of need, my list below does not consider talents such as Luke Joeckel, Dion Jordan, Sharrif Floyd, Eric Fisher, Ezekial Ansah, Dee Milliner, Star Lotulelei or Jarvis Jones. There is a good possibility that atleast one of these players drops to pick 12, and if that is the case, they are absolutely worth a look. However, I wouldn't count on this happening, and that is why I give you the following five players that should be Miami's main targets if they do choose to stand pat at pick #12. 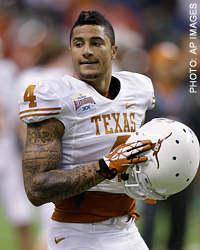 I admit, when the offseason first started, I was one of the few here that thought SAFETY, not cornerback or wide receiver, was our main concern. I thought Miami had a young defense who could hugely benefit from a top safety presence working alongside future stud, Reshad Jones. This is a main reason why my first draft man-crush was Kenny Vaccaro, and also a main reason why I still think Miami should take a flier at a vet like Charles Woodson in free agency just for veteran leadership alone.

Physically, Kenny Vaccaro is a force. He has good size and athleticism and can play a variety of roles in the backfield. He is good in coverage, and even better against the run. He is a smart player with good intangibles and would be great in blitz packages in Kevin Coyle's aggressive defensive scheme.

On the other hand, Miami has already made the decision to resign safety Chris Clemons, and this will hurt Vaccaro's stock alot to be our top pick. As physical as he is, he is not a ball hawk player such as former Longhorn Earl Thomas. Vaccaro ran a mediocre 4.63 40-yard dash, and although he plays faster than his combine states, he also is not the guy who has shown he can cover alot of ground and make plays. In fact, he only had 5 interceptions in his entire time at Texas.

Overall, Vaccaro has got a great chance to be a solid safety in the league for a long time. However, he may not be the best fit so early for the Dolphins considering that they resigned Clemons, and it might be better value for Miami to address safety with later picks, where a guy like Matt Elam, Jonathan Cyprien, Philip Thomas, Matt Elam or D.J. Swearinger, might actually be a better fit... with just as high of a ceiling as Vaccaro. 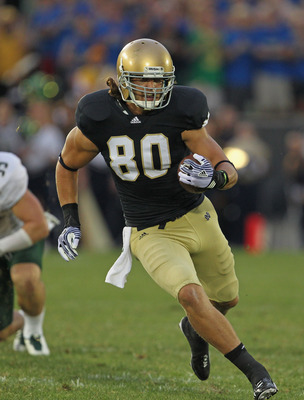 A month ago, I wouldn't have looked twice at Tyler Eifert. Now, he's one of the greatest risers and could be the absolute best selection with a middle pick in round 1. After losing solid but unspectacular Anthony Fasano in free agency, Miami chose to replace the tight end position with AFC East native, Dustin Keller. While I do love that signing to give Tannehill another target in the red zone, two main problems remain; 1) Keller isn't our long term option at tight end and 2) Keller can't block.

If you look at the upgrades on offense, the differences to this team are night and day with the additions we have made thus far. However, the one thing that can be improved (besides our line) is our red zone offense... Who can get the ball across the goal line on a third down and goal from the eight yard line? Tyler Eifert, and his 6'6 frame could make a case to be that man.

I wouldn't be opposed to adding another offensive playmaker at pick #12, and if we do, I think the Notre Dame tight end that is the pick. People will claim for Tavon Austin; as great as a player he may be, wide receiver is a deep position already (wow, who would have thought!?), he would practically eradicate any role of Davone Bess, and he STILL would not help us be a big target to improve our red zone efficiency. So simply put, I don't see it.

Although Eifert lacks elite strength and speed, he is a big bodied target that could be that missing piece on offense that can make Miami one of the scariest offenses in the league. Just think of adding a Jason Witten or Kyle Rudolph to our already impressive wide receiver depth? Well Eifert is in that mold. He has big hands, and can make tough catches in traffic. He is a solid blocker but will need to improve to be a top all-around tight end. Atleast for next year, him and Keller would show Patriot-esque signs in terms of terrorizing teams in two tight end sets.

Though I am not sure Miami will look to pass over a need like offensive line or secondary in the draft, if they do select an offensive playmaker, there is no doubt that Eifert should be that selection. 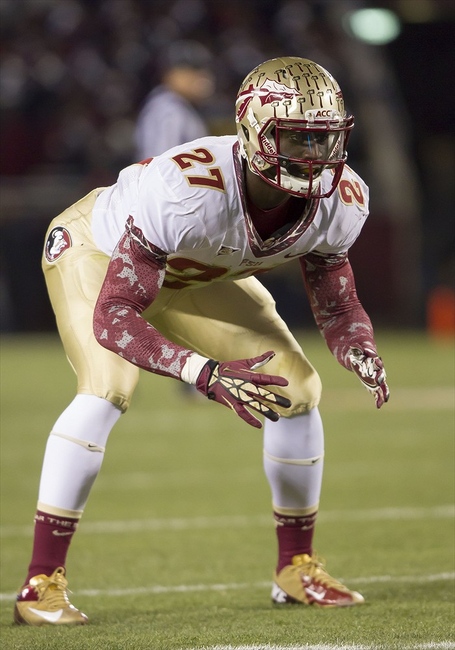 There is a reason Xavier Rhodes is your most mocked projection for the Miami Dolphins at pick #12. He is a viable replacement for a position of need for a team that just lost their top CB in Sean Smith. Rhodes is of similar height and height of Smith, and also looks to be more physical than Smith.

Rhodes has fantastic athleticism and thrives in man coverage, having more than enough strength and speed to stay with the most talented of receivers. You would have to believe that the interesting signing of Brent Grimes will probably play a big role in Miami's draft day strategy. First of all, cornerback is now not a "must" with our first pick; when healthy Grimes is easily one of the best zone corners in the game. As Kevin Nogle pointed out in today's Mock Draft 2.0, the fact that Grimes was signed allows Miami to go after a riskier more physical corner like Rhodes, who will be better suited to match up against larger receivers.

Like Smith though, Rhodes has a tendency to use his hands and be too physical at the line of scrimmage, which will cause a handful of pass interference flags in the NFL. His aggressiveness could be a downfall too depending on you look at it, Rhodes has been burnt on occasions and will sometimes give up a big reception trying to make a play. Personally, I think cornerback could be the position we look at in the first round, and depending on how the coaches think Grimes' rehab is going, Rhodes could be the perfect compliment to him. Or they can look at the man below... 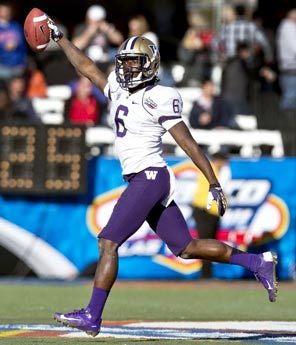 Where Rhodes uses his size and athleticism to make plays, Trufant uses finesse, and he was quietly one of the best corners in college football last season. Before Miami signed Brent Grimes, Trufant seemed to be the best fitfor a guy who can step in and be NFL ready in a primarily zone-run defense. Now, the Dolphins have a bit more flexibility with Grimes, Marshall and Patterson currently on roster, however Trufant still might be the pick.

Desmond has had two older brothers try their luck in the NFL (Isiah and Marcus) and has been compared to Texans CB Jonathan Joseph, who is a two-time pro bowler. Trufant has similar speed to Rhodes, but lacks a big body, so technique is more crucial to his game. Still, he was respected at Washington, and teams rarely tried to see his side of the field. Despite his average frame, he is still a good tackler and doesn't shy away from contact.

It will ultimately be up to Miami by choice if they decide to go cornerback with their first pick. If Dee Milliner is gone, and he most likely will be, Miami could choose between the physicality of Rhodes or the fundamentals of Trufant. 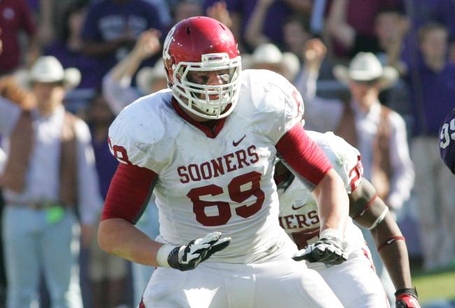 Every week or so you will hear about a player "gaining steam" and quietly rising up teams' draft boards. Recently, that player has been offensive tackle, Lane Johnson. Johnson is a big boy at 6'6, but it's his athleticism that is drawing some attention to teams (he is a former quarterback, tight end and defensive end). Overshadowed by the Luke Joeckel and Eric Fisher, who should be top 5 picks, Johnson has been labeled as more 'raw' but with just as much upside as the others.

His great frame and athleticism would be an offensive fit in Miami's scheme, however rumors have appeared about Miami and Johnson as of late. First, there was rumor that Miami was very interested in Johnson, so much that they were looking to trade up anywhere from pick 5-10 to get him. Then today, Miami Herald's own Armando Salguero, said he "knows" Miami has questions about Johnson.

<blockquote class="twitter-tweet"><p>The Dolphins really like Joekel and Fisher. But I KNOW they have questions about Johnson. So there's that.</p>&mdash; Armando Salguero (@ArmandoSalguero) <a href="https://twitter.com/ArmandoSalguero/status/321288917066342402">April 8, 2013</a></blockquote>
<script async src="//platform.twitter.com/widgets.js" charset="utf-8"></script>

But, this is the time where smokescreens are thick and although Miami will need to do their homework to see if Johnson would be ready to start Week 1, I seriously doubt that they aren't intrigued over Johnson and his 4.70 40-speed.

After Jake Long's departure to St. Louis, offensive tackle is the one position where Miami has yet to address. Although a handful of respectable tackles remain in free agency, Miami might look to draft a young stud and solidify the line with our top pick. Although, I wouldn't be thrilled with losing a second round draft pick to trade up five spots to grab the third highest rated tackle (OK, I would be upset..), the fact is that Miami needs a tackle in a bad way. If Johnson is still on the board past single digits I would not be opposed to jumping San Diego and trading a later round pick to select him at pick #10. Johnson may not be the sexy pick you might be looking for, but it would fill the last remaining DEEP hole on the team.

So there you have it! Though the draft may throw us a few curveballs that we can't prepare for, the fact is that those 5 guys above are probably right at the top of Miami's draft board. Unless the unforeseen happens, who would you like Miami to go after in the draft? [Personally, I can live with all of these guys at #12!] If it's someone different, please tell us why in the comments below.