Kenny Vaccaro to meet with Dolphins

The Miami Dolphins have scheduled a visit with Texas safety Kenny Vaccaro ahead of this month's NFL Draft. Vaccaro is seen as the top safety in this year's draft class.

Share All sharing options for: Kenny Vaccaro to meet with Dolphins

The Miami Dolphins have schedule a meeting with former Texas Longhorns safety Kenny Vaccaro ahead of the NFL Draft later this month according to an ESPN report. Vaccaro, widely considered the top safety in this year's draft, is expected to be a top-20 pick. The Dolphins hold the 12th overall selection.

Vaccaro was previously a popular Dolphins selection in mock drafts, with Miami adding either him or a wide receiver. However, with free agency altering the perceived landscape around the league, Vaccaro has slid away from the Dolphins, with the team looking at offensive line or cornerback with the pick more often. 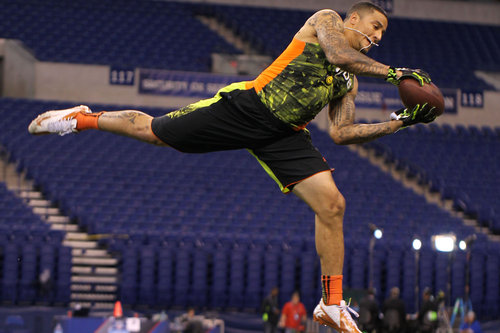 A complete breakdown of the Texas safety.

Currently, the Dolphins have Reshad Jones and Chris Clemons as their starting safeties, but could be looking to upgrade Clemons' roster spot. The team could also allow Vaccaro a year to develop behind Clemons, who was re-signed to a one year contract this year.

The Dolphins did use a three-safety nickel package at times last year.

Vaccaro was used as a nickel coverage player for the Longhorns, often in man-to-man coverage on the slot receiver. He has the athleticism and strength wanted in a safety, and is a good open field tackler. However, he would have to learn to play as a deep safety after spending most of his college career attacking the line of scrimmage or locked on to a receiver.

Last year, the Dolphins met with their allotted 30 players, as well as held a local prospects scouting day. The only player that the team selected out of all the players reportedly to have met with them was Texas A&M quarterback Ryan Tannehill.

After a free agency period where the team announced visits by player, this year's prospect visits have been less publicized. Few of the team's visits have been reported, and the team could only leak the players they want other teams to know have visited.

The Dolphins have a ton of flexibility with their first round pick, and could look to move up, move down, or pick the best player available. One of the players who could be on that BPA list is Vaccaro. We won't know if the team is serious in considering him until April 25's first round of the draft - but, then again, we may never know.