Road to the 2013 NFL Draft: Catching up with Eastern Washington's Kyle Padron

The NFL Draft is getting closer, and draft prospects are all putting the final touches of the resumes by working out at their respective colleges' Pro Days. A couple of months ago, I got a chance to ask former Eastern Washington Eagles quarterback and current draft prospect Kyle Padron about declaring for the draft. Yesterday, I caught up with him again, and asked about his Pro Day experiences.

Share All sharing options for: Road to the 2013 NFL Draft: Catching up with Eastern Washington's Kyle Padron

The days remaining before one of the favorite days for an NFL fan are winding down. Three weeks from today, the 2013 NFL Draft kicks off. All around the country, prospects are trying to put together one last positive impression for scouts by working out at their respective schools' Pro Day or hooking up with a team for a private workout or local prospect day.

I spoke with several teams. I had a chance to talk with representatives from the Chiefs, Browns, Seahawks, Texans, Cowboys, Steelers, Bears, Dolphins and Panthers. -Kyle Padron

Eastern Washington quarterback Kyle Padron is one of those prospects. Getting a chance to work for scouts at both EWU's Pro Day (March 6) and at SMU's workout day (March 27), Padron got to visit with multiple teams and get some more exposure before the April 25 start of the draft.

Padron started his college career at SMU before transferring to Eastern Washington last year. He led SMU to their first bowl appearance since the NCAA "Death Penalty," a 2009 Hawaii Bowl win, as well as bowls in 2010 and 2011. Last year, Padron led Eastern Washington to the NCAA FCS semi-finals.

A couple of months ago, Padron was kind enough to give us a look at how a prospect actually declares for the draft. Yesterday, I got a chance to talk to him about his multiple Pro Days, and what's next for him.

Your first Pro Day, up at Eastern Washington, was an adventure to say the least. Can you run us through everything that happened that day?

We got our height and weight, which was pretty much standard procedure then carried on to the weight room. We tested our vertical and broad jumps and the other guys did the 225-bench test. We went outside onto "The Inferno" to do the on field testing. As soon as the last person finished the 40, the ‘Big Sky' opened up on us and started dumping hail, sleet and snow. We were forced indoors to finish the shuttles. Finally, it was time for position drills and the winter storm had gotten worse and everything was white. We tried to go into the field house (basically an indoor track and 5 tennis courts) to do spot throws just to give the scouts a glimpse. That's when the power went out. We were in the dark for 15 minutes. Once the power came back on, we all decided we wanted to go outside and throw in the powder like we did in practice the whole year. I made about 30 throws to different spots on the field and the day was over. It was a wacky day to say the least but I feel like we did a great job as a group of fighting through it and showing we can play ball in any climate.

You still did some of the workouts, even through the hail. How did you feel about the results? 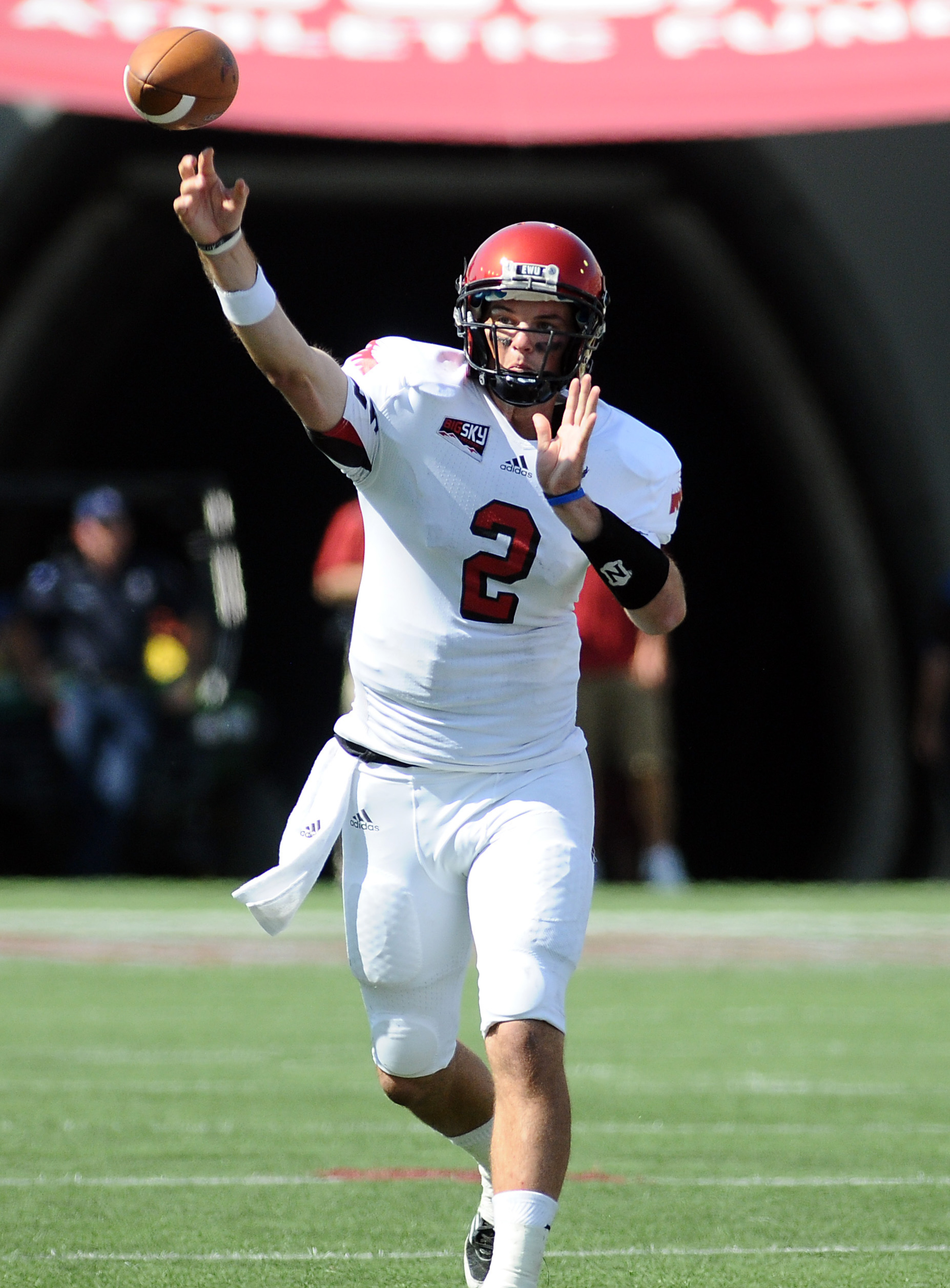 I thought I did well personally, but I was more proud of the way everyone handled it. The other players wanted to be out there as bad as I did because I think we all have a chip on our shoulder from the "small school" label we always hear. It gets pretty old so we wanted to go play ball and have fun with it like we always do.

Was it always planned to do a second Pro Day at SMU, or did that come together after the weather issues? Was it just a matter of picking up a phone and calling head coach June Jones to get it set up?

I had planned on doing it regardless of what happened at EWU. I felt like in my situation, I need all the looks I can get. It would benefit me more to be seen by two different sets of scouts and hopefully create more of a buzz. I am fortunate to have left SMU with such a great relationship with the coaching staff. They welcomed me back and told me I was a part of their family.

I had a great time with it. I have been going up there to throw and lift with some of the guys that graduated and some of my old teammates still playing. I miss those guys and it is always fun to see them and work with them.

How did your workout go in the Texas weather rather than everything that happened up in Eastern Washington?

It was definitely warmer but it was a "cool" day at SMU being in the low 50s. I thought I had a good day for the most part. The weather has never really affected me or the way I throw the ball. I'm able to block it out mentally and just trust my mechanics.

Did you get a chance to talk to any NFL teams? Can you share which ones?

I spoke with several teams. A lot of them were just getting some information but I had a chance to talk with representatives from the Chiefs, Browns, Seahawks, Texans, Cowboys, Steelers, Bears, Dolphins and Panthers.

Finally, what are your plans between now and the NFL Draft at the end of April?

I am going to keep working out and throwing 4-5 days a week. I was invited to the ‘Dallas Day' with the Cowboys on April 10. I'm hoping for more workouts but I'm only going to worry about what I can control in my work ethic and continuing to grow as a quarterback.

A huge thank you to Padron for taking the time to talk with me, especially in what is probably one of the most hectic times in his life. Hopefully, we will get a chance to talk to him again just before the draft.