The Miami Dolphins continue to explore free agency options to address their offensive tackle needs. According to reports today, the Dolphins are set to visit with Tyson Clabo tonight.

Share All sharing options for: Dolphins visiting with Tyson Clabo

Oh, how the tackles turn. A day after the Miami Dolphins hosted free agent tackle Bryant McKinnie, among reports that the team has an ongoing dialog with Eric Winston, and just after the rumored trade for Kansas City Chiefs tackle Branden Albert fell apart, the Dolphins are bringing in another free agent tackle for a visit. Former Atlanta Falcons starter Tyson Clabo is reportedly heading to Miami tonight. 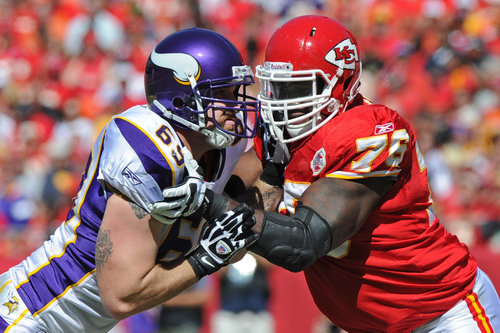 The trade between the Miami Dolphins and the Kansas City Chiefs for Branden Albert died over the weekend when Miami traded away their 42nd overall pick, used their 54th pick, and then drafted an offensive lineman in the third round. However, reports last night indicate the deal may not be as dead as we thought.

Clabo has started 90 games for the Falcons over the past six seasons at right tackle (playing right guard his first active year with the team in 2006). He's a solid player, and would serve as a band-aid for a year or two, giving Miami an opportunity to address the tackle position again in next year's draft. It could also let them see if Jonathan Martin can play left tackle, or if the newly drafted Dallas Thomas can develop into an NFL tackle, or if he will be a guard at this level.

After yesterday's visit with McKinnie, the former Baltimore Ravens left tackle left town without a deal, but the two sides were said to still be talking. Miami has also maintained a conversation with Winston, and could be looking to sign him as a right tackle. Ireland also has not ruled out a return to the trade table with the Chiefs for Albert. "I never say never," Ireland told Salguero. "I don't want to get into the details of that trade right now when it could or couldn't happen down the road.

Another day, another rumor about the Dolphins' tackle position. Clearly the team is looking to address the situation. It's now just a matter of finding the right fit - and the right price - before the Dolphins make some move.