The Miami Dolpins continued their aggressive approach to the offseason last night, moving up nine spots in the first round to select Oregon defensive end Dion Jordan. After the pick, GM Jeff Ireland and owner Stephen Ross addressed the media.

Over the past few days, rumors and speculation around the Miami Dolphins all focused on the one glaring area of need on their roster. Everyone knew the Dolphins were going to target an offensive tackle. It made sense. It followed logic.

The Dolphins were thought to be high on Luke Joeckel and Lane Johnson. When Jockel was selected with the second overall pick last night, behind the first pick of offensive tackle Eric Fisher, the Dolphins appeared to be reacting to the perceived run of pass protectors, found a trade partner in the Oakland Raiders, and pounced. 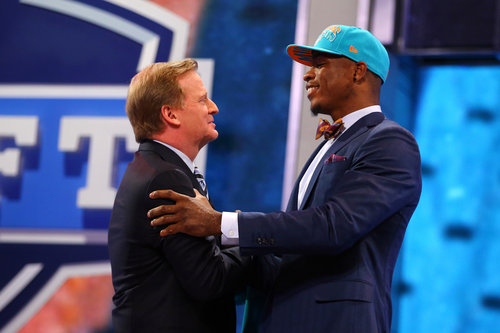 As we did for several draft prospects leading up to the NFL Draft, I turned last night to the managing editor of an SB Nation college blog for a look at a player, in this case, Addicted to Quack. This time, however, it was for the newest member of the Miami Dolphins, former Oregon defensive end Dion Jordan.

The only problem was, that pounce ambushed all of the draft analysts. The team did not get Johnson. They grabbed a pass rusher instead of a protector. The Dolphins swapped first round picks with the Raiders with only their 42nd pick, one of two the team had in today's second round, as payment.

That means, in terms of draft value, the Dolphins got the third pick, worth 2,200 points, for two picks worth just 1,680. The Dolphins underpaid for the move by 520 points.

"There's nothing better when you're really drafting and you're getting what you think with the third pick in the draft is the guy who you really loved," Dolphins owner Stephen Ross said after the pick. "It's a great day and the value, giving up as little as they had to give for him and looking at the numbers and how they assess things, this is incredible."

"The reason that I made the call is, I felt like it was a buyer's market," Ireland explained. "I felt like they did want to get out of (that pick) and felt like, you don't get anything for not asking, so why not ask?"

Earlier in the week, during an organization dinner, Ross had polled all the Dolphins' coaches, asking them who, with no regard to position or draft pick, each coach would want on the team. The name that kept coming up was Jordan. When Ireland told Ross he was going to call Oakland five minutes into the 10 minute draft clock for the Raiders' selection, Ross thought it was a joke.

"Everybody thought, ‘Hey, we'll never get him.'" Ross said of the phone call. The move up to a third overall selection was expected to be cost prohibitive. Oakland rejected the Dolphins' initial offer. Then the phone rang again.

"Sure enough when they called back I think everybody in that room was shocked," Ross said. "This is an impact player."

"I made a call before the draft just to let them to know that I was interested in maybe getting up," recalled Ireland. "And then I waited for about I don't know five or six minutes while they were on the clock and there was no call from them.

"I called and just asked if they were looking to move the pick. They said they were ‘open for business.' I offered my first offer and they said, ‘We're not interested.' So I waited another 45 seconds to a minute and they called right back, asked for (No.) 42 and I said, ‘Sure, we'll do it.' That's how it happened."

The reason that I made the call is, I felt like it was a buyer’s market.I felt like they did want to get out of (that pick) and felt like, you don’t get anything for not asking, so why not ask? -Jeff Ireland on moving up to draft Dion Jordan

Ireland also explained that he and the team have been watching Jordan for two years. "This is a player that we actually sat in our draft room in December of 2011 and started watching because he was a third year sophomore and we thought he might come out and he didn't. But he's been on our radar for quite a while. We've always felt like he's got a tremendous skill set that's unique. So he's been on our radar for a while."

The Dolphins return to action tonight, with the Draft's second and third rounds. They currently hold three picks in the two rounds, the 54th overall selection in the second round and overall picks 77 and 82 in the third.