SB Nation took a look at what the Miami Dolphins need heading into tonight's draft. Here's what they say, with my commentary. 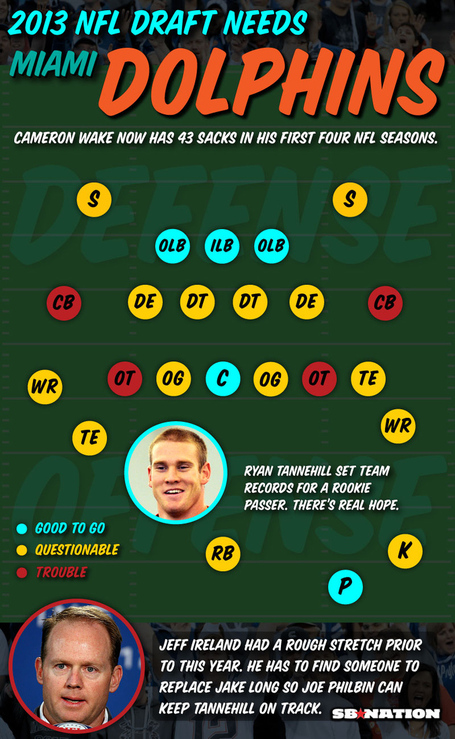 SB Nation clearly identified the top needs for the Miami Dolphins as offensive tackle and cornerback. That falls right in line with my assessment, which you can find here.

Miami has to find someone to fill the hole left by Jake Long's departure. The team could be looking for either a starting left tackle or a right tackle if they elect to move Jonathan Martin to the left side.

As for cornerback, the departure of Sean Smith, eight months after the team traded away Vontae Davis, has made the position one of the top priorities, even after the team added Brent Grimes in free agency. Richard Marshall coming back from injured reserve could add depth, but not knowing exactly how both Grimes and Marshall will play this year means the team has to add as many cornerbacks as possible to make sure they hit on two starters.

After that, defensive end, tight end, wide receiver, and running back are probably the most pressing non-need needs. Upgrades at all those positions will keep the Dolphins offseason momentum continuing through the draft.

Make sure you check out my full list of 2013 Miami Dolphins needs as well.